Does anyone have any additional information on the proposed Royal Dockyard at Northfleet?

In the light of John Rennie’s great experience as an engineer, it is interesting to consider observations he made on various royal yards in 1807. These were prompted by a commission of enquiry that had been set up to examine defect in all naval establishments. Rennie was singularly unimpressed; he considered Plymouth to be the most suited, noting the spacious harbour, general lack of silting and the navigational hazards that would eventually be overcome by the breakwater. Portsmouth, on the other hand, was more heavily criticized for, at that stage, the harbour was showing definite signs of silting, whilst he considered the dockyard to lack adequate space for the various buildings and machine shops being built.

Perhaps the most startling of his observations concerned the dockyards of Woolwich and Deptford, both of which he recommended for closure. Too far up river, they suffered from a lack of space and were constantly subjected to silting and so could not be used effectively. Commenting on Woolwich, but later using a similar argument for Deptford, he informed the committee that ‘the enormous expense of removing the constant accumulation of mud in front of the dockyard and the confined and defective arrangement of the dockyard itself, were ample reasons for it being condemned as unfit for the construction and repair of great ships.’ To replace the two yards, Rennie suggested the founding of a new dockyard at Northfleet, down river but still on the Kentish side of the Thames and not far from Gravesend. With the purchase of sufficient land, it would prove an ideal site for a dockyard, designed at the very outset for building, constructing and refitted the largest of the nation’s warships. Included in the new Northfleet dockyard would be two large wet-docks, eight dry-docks and eight building docks:

'Ships will be launched immediately from these docks and slips into the great wet dock, without communicating with the river, and all vessels in ordinary may be moored on its north side, where there will be room enough to moor 70 sail of the line; or, if fewer ships of the line, a proportionate number of frigates and smaller vessels, without impeding or interfering with the works carrying out on the south side.'

In the event, the committee accepted the proposed scheme, recommending implementation in its entirety. The government went as far as acquiring the necessary land but unfortunately the pressures and expense of the war made the scheme impracticable and the project was cancelled with the return of peace.

At Chatham, Rennie was just as radical in approach. Noting the restrictions of space and the shallow state of the Medway, he proposed the addition of massive wet docks formed out of the Chatham and Limehouse Reaches of the Medway. This would have provided considerable additional space for both dry-docks and slipways, whilst the entrance of the proposed wet-dock, being situated near Gillingham would go some way to alleviating the hazards of navigating the various twists and turns between Chatham and Sheerness. None of this, however, was constructed, again due to the expense involved.

John Rennie, as indicated was highly critical of dockyard design and layout. In examining each of the dockyards he ad suggested some very radical alternatives to the piecemeal improvement programmes that were usually adopted. He was aware, as were most critics that essentially the design of the six main yards had been determined during the sixteenth and seventeenth centuries. To impose upon this the needs of the nineteenth century was insane. Doubtless the Navy Board and the Admiralty were aware of this, but the necessary advances that Rennie indicated were beyond their limited finances. A confident wartime Admiralty promised itself new dockyards upon the return of peace, but with its arrival in 1815 government concern with the yards diminished. The sound proposals of John Rennie were quietly forgotten. Indeed, some thirty years later, when the Crimea was being fought and the ships themselves undergoing change, the dockyards remained unaltered. A chance to solve Britain’s shipbuilding and repair difficulties had, one again, been passed over.

No size of wet-docks, dry-docks or slips is given but I have read on line that the Northfleet proposal was to cover around 800 acres. ‘Royal Dockyards’ says the 1870’s extension to Portsmouth brought that yard to about 300 acres, the 1885 extension at Chatham added around 380 acres to the existing 97 acres and the 1890’s Keyham extension was about 246 acres though I have seen other figures quoted elsewhere.

Northfleet is opposite Tilbury, anyone know what the largest ship to get as far up the Thames as Tilbury is?
P

In Building the Steam Navy: Dockyards, Technology and the Creation of the Victorian Battle Fleet 1830 – 1906 by David Evans

In an Admiralty visit to Portland in 1856 the development of Portland as a complete naval base to counterpose the French menace had been discussed, and (James) Rendel was asked to prepare a scheme. His death prevented his completing a design, but (John) Coode took over the task, and on the Admiralty visit to Portland in August 1859 he wrote a long letter to the Admiralty describing his Yard, the first to be specifically designed for the Steam Navy. This would be a state of the art undertaking, with three building slips, an outer basin and two inner basins, three dry docks and two coaling jetties. The whole dockyard was protected by a breakwater of its own. The latest technology, hydraulic machinery, was now incorporated in the coaling equipment.

All that materialised out of these grandiose plans were the mechanised coaling system and the great coal store.


There is a plan (TNA ADM 1/5730) of the dockyard and it looks like the breakwater we see today was also part of it and the facilities would have been more or less where what is there now is. The plan doesn’t seem to keep the proper scale as the two inner basins also appear to be far too small or the slipways and dry-docks are very big.

Also, all three basins appear to be tidal, without locks.

Does anyone have any additional information on this (basin, slipway and dry-dock size) and why it was never carried through?
P 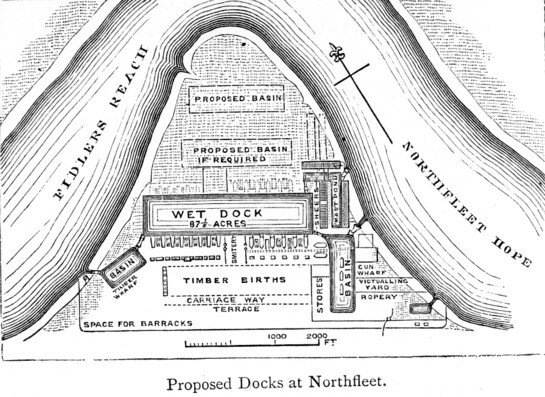 The site of the proposed arsenal was the flat portion of land near Northfleet, about eight hundred acres in extent, lying in the angular space formed by Fidlers' and Northfleet Reaches. Its depth close to the shore was about seven fathoms at low water, or sufficient for vessels of the largest burden.

The main entrance-lock was to be at the Northfleet end of the docks, within which was to be an entrance-basin 1,815 feet long and 600 feet wide, covering about twenty-five acres. Dry docks were to be placed conveniently near, from which the water was to be pumped by powerful steam-engines, so that vessels might be docked directly from the basin, and have their bottoms examined with the least loss of time. Part of the entrance-basin was to be appropriated for an anchor-wharf, another for a gun-wharf; next the stores and victualling wharves, with their appropriate buildings; the whole arranged on a system, so that the materials required on shipboard might be passed forward to their respective wharves from one stage of preparation to another, with the greatest despatch and economy. At the north end of the basin were to be the mast and boat ponds, with their adjoining workshops, connected also with the Thames and the main western basin by separate entrances.

The main western basin was to be at right angles to the entrance-basin, 4,000 feet long and 950 feet wide, covering a surface of about eighty acres. Alongside were to be six dry docks and eight building slips, all fitted in the most complete manner with the requisite saw-pits, seasoning-sheds, mould-lofts, timber stores, and smitheries, conveniently situated in the rear. The whole of the heavy work, such as bellows-blowing, tilt-hammering, forging of anchors, and iron-rolling, was to be performed by the aid of steam-engines and machinery of the most perfect kind. Seventy sail of the line, with a proportionate number of smaller vessels, might conveniently lie in this basin, and yet afford abundant space for the launching of new vessels.

Another basin, 980 feet long and 500 feet wide, was proposed for timber-ships, on the south-west extremity of the great basin, with a separate entrance into the Thames a little below Greenhithe.

The whole of the arsenal was to be connected together by a system of railways extending to every part and all round the wharves. The plan was most complete, some of the details being highly ingenious. But the cost of executing the work was the real difficulty; Mr. Rennie's estimate of the total outlay requisite to complete the Works amounting to four millions and-a-half sterling. Yet the plan was so masterly and comprehensive, and so obviously the right thing to be done, that the Portland Administration determined to carry it out, and the necessary land was bought for the purpose. Frequent changes of Ministry, however, took place at the time; the resources of the country were heavily taxed in carrying on the war against Napoleon in Spain; the public attention was diverted in other quarters; and no further steps were taken to carry out Mr. Rennie's design. He knocked at the door of one Administration after another without effect. In 1810 we find him writing to Lord Mulgrave, the First Lord; to the Right Hon. George Rose; to the Earl St. Vincent, and others; but though the more the plans were scrutinised, the more indisputable did their merits appear, he could find no Ministry strong enough to carry them out. When peace came, Government and people were alike sick of wars, naval armaments, and glorious victories; and believing that all danger from France was at an end,—the French fleet having been destroyed or captured, and Napoleon banished to St. Helena,—it was supposed that the old royal harbours, patched and cobbled up, might answer every purpose. So the land at Northfleet was sold, and the whole subject dismissed from the public mind.

But, after the lapse of half a century, the wisdom of Mr. Rennie's advice has become more clearly apparent even than before. For years past, the waste in our dockyards, which it was the chief object of his Northfleet design to prevent, has become one of the principal topics of public discussion, and it has been the standing opprobrium of every successive Naval Administration. What Mr. Rennie urged fifty years since still holds as true as ever —that without concentration economy is impossible. So long as Government goes on tinkering at the old dockyards, spending enormous sums of money in the vain attempt to render them severally efficient, and maintaining separate expensive staffs in so many different places,—building a ship in one yard and sending it round the island to another, perhaps more than a hundred miles distant, to be finished and fitted, and then to another to take its guns, stores, &c.,—so long shall we have increasing reason to complain of the frightful waste of public money in the royal dockyards
Z