hesham said:
Unknown ornithopter.
here is the source,but it is not working.

(Edit: Judging the search results, the original source could be the DVD box "A Century of Flight: 100 Years of Aviation")
Click to expand...

Maybe the name of the designer here,am I right ?.

Re: German Sailplanes and Projects

here is a motor glider for Gustav Lilienthal;

Re: Re: German Sailplanes and Projects

NOT a motor glider, but an ornithopter!

Re: Re: German Sailplanes and Projects


Maveric said:
NOT a motor glider, but an ornithopter!
Click to expand...

Here is an ornithopter drawing from Mr. Adolf Cozza;

hesham said:
And the French designer Roux of 1904;

here is an ornithopter designed by Mr. Soltau,and he created a Sturmvogel in the Austro-Hungarian
during 1910.

With a very great probability, the name of the designer is "Soltau" and the name
of his design is "Sturmvogel" (albatross).

OK,and thank you my dears Jemiba and Arjen,

I will correct it.

again and again,Mr. G. C. Richard and his new ideas.

The first time to hear about Gyrorame ?.


Oskar Dinort was before and during WW II a well known sailplanes and aircraft pilot . 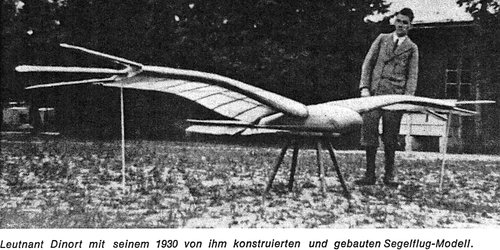 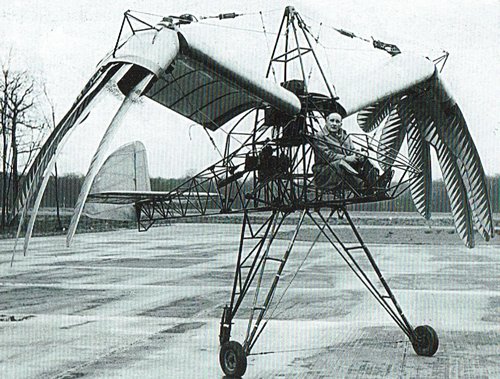 I never saw before a picture of the finished bird (from "digit.wdr.de" then SUCHEN : "Flugzeughallen") : 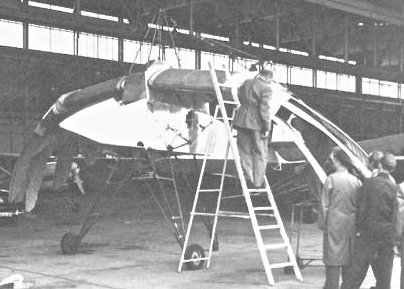 here is an ornithopter glider,designer by a German Martin Brustmann in 1925,also a look like
ornithopter,designed by Mr. Martin Sultan.

The entomopter is unmanned and an insect-analogue rather than a bird-analogue (hence different aerodynamics on the wing), but more relevant here than anywhere else.

from Mr. Marcel Baudelot in 1922,it was called Ornitho-Helicopter,but I don't know if he meant
by ornitho,ornithopter or not ?.

here is an ornithopter.

here is an ornithopter aircraft,designed by Mr. Emiel Hartman. 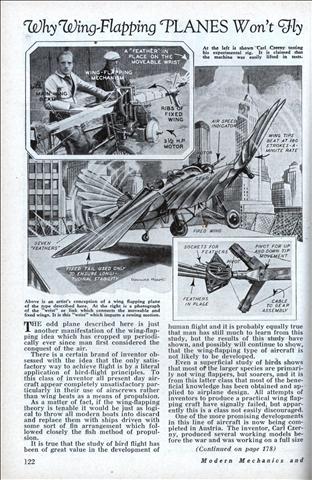 THE odd plane described here is just another manifestation of the wing-flapping idea which has cropped up periodically ever since man first considered the conquest of the air. There is a certain brand of inventor obsessed with the idea that the only satisfactory way to achieve flight is by a...
blog.modernmechanix.com

richard said:
The third is the German Filter "Schwan Eins" built by Dahm & Krüger and shown at Hannover in 1958. 4 hp motor .
Click to expand...

Kazuhiko Kakuta is an innovative and prolific creator of ornithopters. His models mimic nature and the fantasy creatures and machines of Hayo Miyazaki's anime films.
In his spare time, he is a doctor of allergies and pediatrics.

Here is a Pause Ornithopter.

On November 27, 1913, Jakub Bennek obtained protection from the German Patent Office for Utility Model No. 583,728 of an aircraft with movable wings.

The patent related to an ornithopter flying apparatus with a movable lobe. This solution was to be characterized by the fact that the wings were set in a periodically-variable movement, from the front back to the bottom. In this system, the ornithopter lobes could act as a supporting and propelling surface at the same time.

On June 24, 1913, Adalbert Domaradzki submitted a patent for a flying machine in the USA. Patent No. 1,098,024 was issued to him on May 26, 1914.
It was an aircraft (consisting of a fuselage, biplane airfoils, tail, propellers and propeller-driven rotors driven by an internal combustion engine) characterized by the mechanism of changing the rotational movement of the propeller shaft into periodically variable movement of wings, a mechanism enabling the transformation of movable airfoils into permanent and vice versa in that the propeller stream of the main rotors is directed against them in order to increase the effectiveness of the movable airfoils. The fuselage on a wheeled chassis houses the crew of the aircraft, engines and on the booms - supporting wings, propellers and drive transmission mechanisms.

The lower and upper blades, connected by posts, work on a combined drive from a common engine. They are based on articulated divided beams. Through the belt transmission, the rotational movement of the drive motor shaft is transmitted to the cam disc, and from there to the corresponding frame moving from top to bottom. Through appropriate connections and pushers, the periodically variable motion is transferred to the spar of the upper lobe. As this airfoil moves up and down, its angles of attack are simultaneously changed. The lower wings, with a shorter span, similarly move in a periodically alternating motion from top to bottom, with their drive mechanism being coupled to the mechanism of the upper wings movement. The upper wings can be immobilized and, at the same time, by tightening the gap between the panel and the frame within which the wings made a waving motion, a fixed panel can be obtained. Similarly, the lower lobe can be used as a fixed lobe. Moving wings and a set of four main rotors, seated in pairs in front of and behind the blades, work in the ascending flight. In horizontal flight, the main role is played by fixed airfoils and two propellers on horizontal axes, the arrangement of which is shown in the drawings. The aircraft is equipped with a tail for height and direction.

The patent memorandum indicates that his attention was focused on the mechanism of transforming the rotational movement of the propeller shaft into periodically variable movement of the wings, as well as on the creation of a mechanism enabling the transformation of movable airfoils into fixed airfoils, as well as increasing the efficiency of the movable wings, which he wanted to achieve by bringing underneath the propeller jet of the main rotors.