Sundog said:
No, Covid didn't really slow it down.
Click to expand...

OK, I must have been thinking about the Spirit Aero article where they said Covid didn't slow them down because they moved people from the 737Max line to the B-21 line. Having said that, it still wasn't going to meet the Dec. 21 first flight date, also due to technical issues. 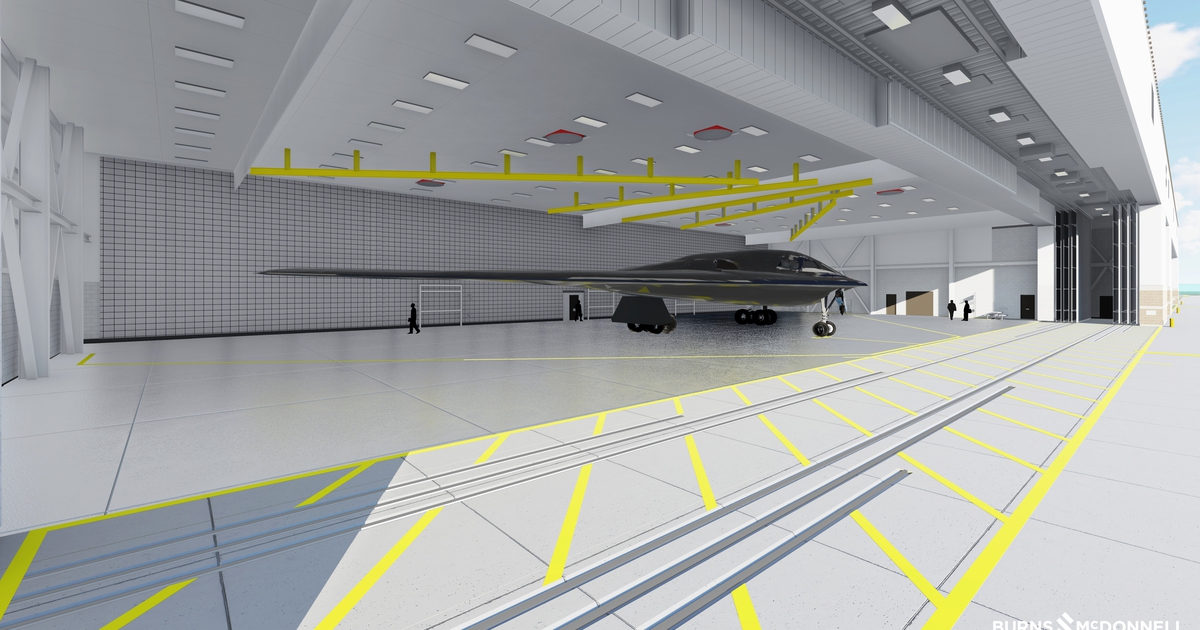 Construction of the second B-21 is underway.

Why Was The U.S. Air Force B-21 First Flight Delayed? | Aviation Week Network

Ask the Editors: USAF pushed the Northrop Grumman B-21 bomber’s first flight from December 2021 to mid-2022. What does that mean?

Sounds like article number 001 will see active duty if they are saying it will essentially be a production intent vehicle. Good for the USAF they need that aircraft operational ASAP.
N

rooster said:
Sounds like article number 001 will see active duty if they are saying it will essentially be a production intent vehicle. Good for the USAF they need that aircraft operational ASAP.
Click to expand...

It says quite a bit about their design and production planning.
T

Do not forget how sciences demonstrator airframe were rumored having been flown at the time the contract surfaced.

Why Was The U.S. Air Force B-21 First Flight Delayed? | Aviation Week Network

Ask the Editors: USAF pushed the Northrop Grumman B-21 bomber’s first flight from December 2021 to mid-2022. What does that mean?

At no point in that article is the alleged 'reader' question actually addressed.
J

The team tasked with turning the world's most advanced and sinister aircraft into a reliable weapon of war has one ominous but relevant motto. 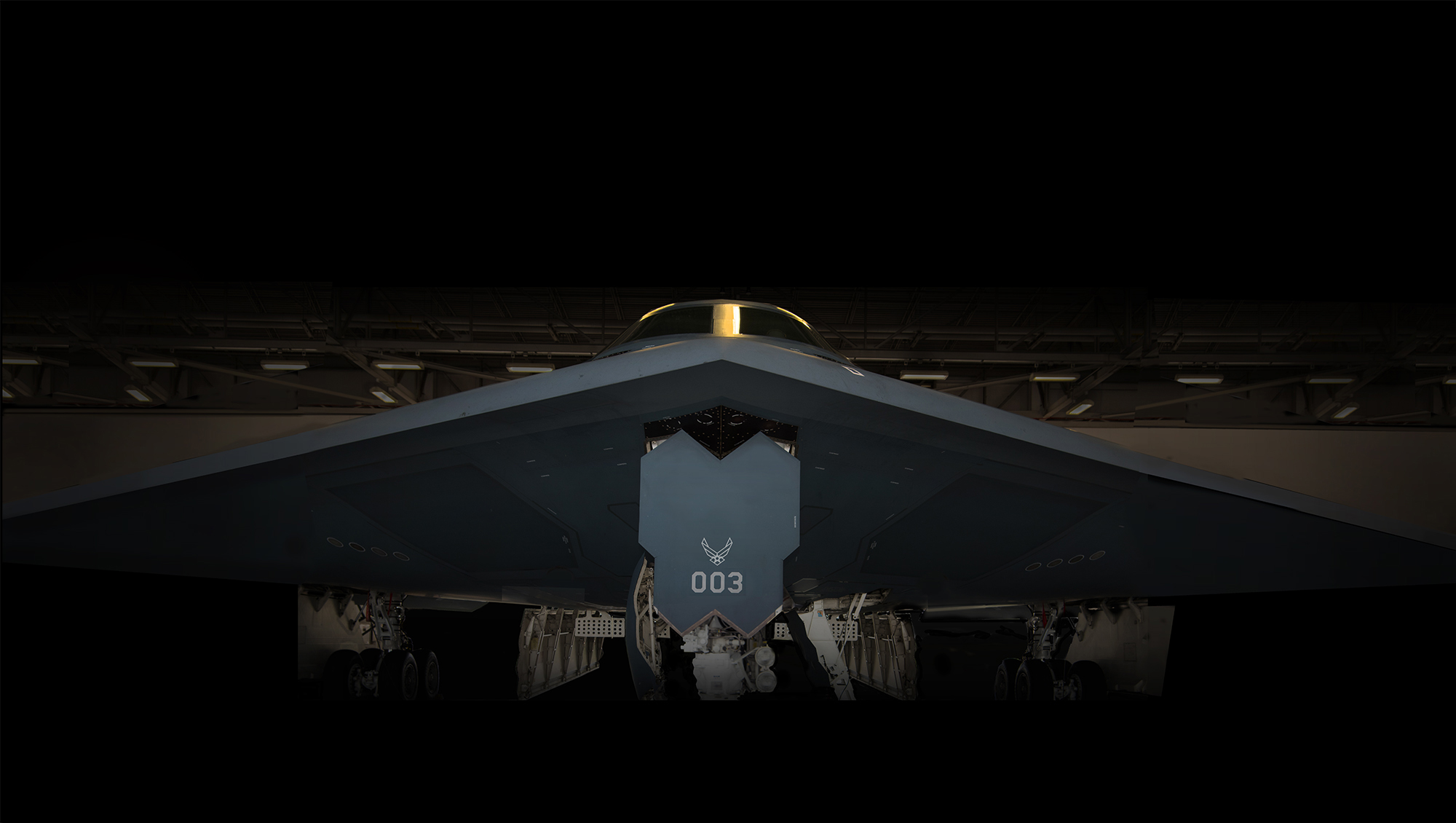 The Raider Comes Out of the Black - Air Force Magazine

The B-21 is progressing to roll out and first flight, as the Air Force wrestles with how many to buy.

Really interesting.
The graphics from above link (notice the distributed propulsion exhausts on the inner trailing edges as envisioned early on):

I see they are still being cagey about its power plant. Is the F135 used in it likely to be substantially different to the one in the F-35?
T

@Flyaway : Well there is no afterburner and inlets look quite massive even for an artist rendering.

TomcatViP said:
Really interesting.
The graphics from above link (notice the distributed propulsion exhausts on the inner trailing edges as envisioned early on):
Click to expand...

Really not interesting. They should hire other artist. This one even didn't understand how inlets do look like on Raider or made some research to find B-21 planform image at official site.
T

I think inlets are in fact somewhat masked/simplified as is the drawing in general.

"interesting" referred also to the content of the news report.
Last edited: Feb 21, 2021 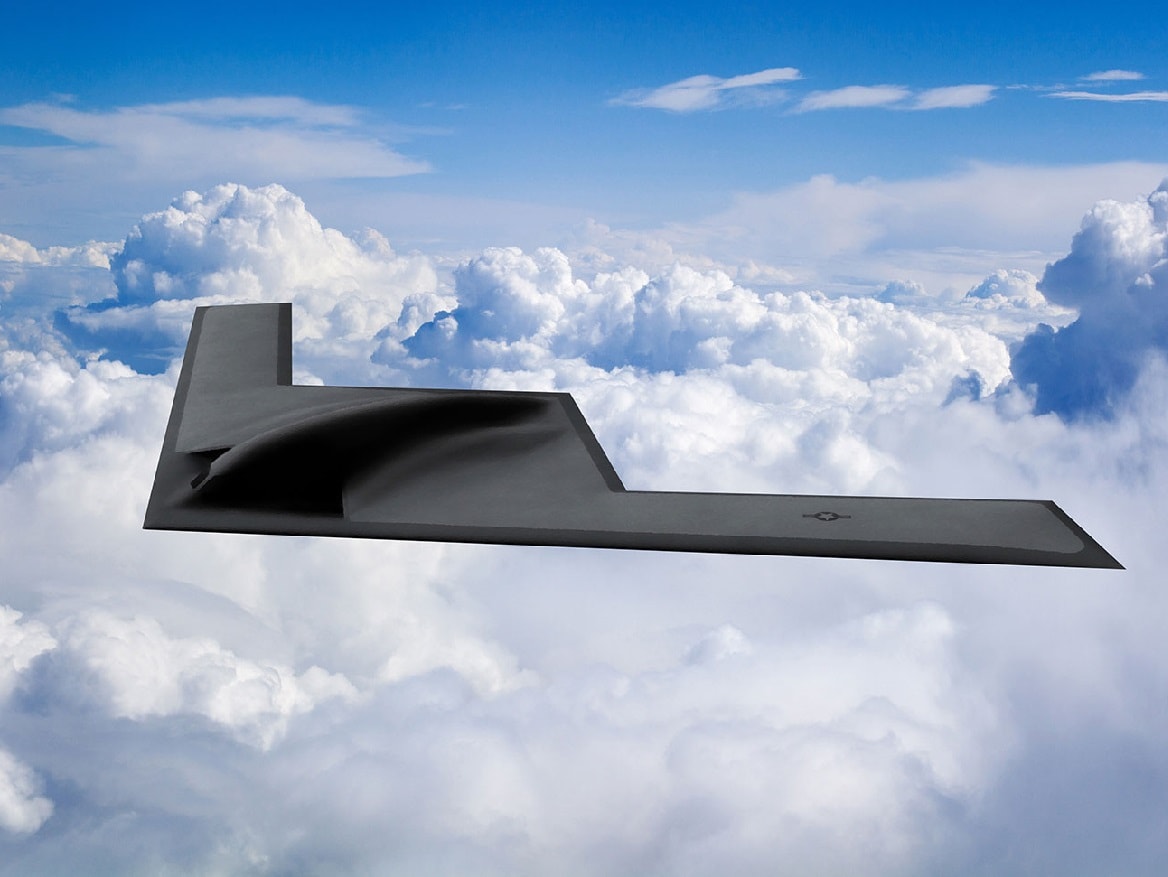 Why Nothing May Stop the B-21 Raider Stealth Bomber - 19FortyFive

The B-21 is a heavy stealth strategic bomber that has its roots in the Long Range Strike Bomber program (LRS-B), an early to mid-2010s procurement program for a long-range, nuclear-capable strike bomber.

Surprised SDB wasn't part of that list. I'd think a large payload of cheap stand off weapons would be desirable.

U.S. Air Force officials say the B-21 program was not slowed down by a need to redesign the engine inlet, with the second aircraft now entering the production system.

The program really appears to be progressing rapidly. The above article mentions that weapons integration has been reduced from "years" to "months", which is interesting. I assume this aircraft is using a lot of digital design/twinning and that is allowing for rapid changes without major schedule changes. A program being on time and on budget would be a welcome change. I can think of like two other aircraft programs in recent times that achieved that, and both were adaptations of existing airframes (F-18E/F and P-8).
T

The best comparison would be with a plane of similar type/mission set and significance. Meaning the B-2.
Winning design proposal for B-2 was chosen in October 1981.
First prototype flight was in July 1989.
Sometime in mid 1980s there was a redesign, due to sudden shift in USAF requirements. James Goodall mentioned in his 1992 book on US stealth planes that the redesign cost the team two years. Whether that is true, or it took less is hard to know. If anyone has other sources and claims on the B-2 redesign woes - that'd be great.

Anyway. B-21 had its winning design proposal chosen in October 2015.
First flight of the prototype seem to be expected around mid 2022. Guessing the exact month is, of course, impossible.

So this first part of the development, actually getting the design to the flying prototype, isn't really quicker.

But maybe the second part of development, verifying and testing the prototype, validating the design and serial standard planes and establishing the ecosystem for support so the first bomber unit can stand up - that may be quicker. We will see.

First serial standard B-2 was delivered to USAF in December 1993.
In January 1997, first B-2 unit was declared operational.

Whether that's a good timetable for comparison remains to be seen. B-2 funding may have suffered due to end of the Cold war so finishing up development and having units standing up may've not been a priority.
J

The B-2 redesign I believe was attributed to the requirement that the B-2 be able to penetrate at low level. This required the B-2 to adopt the saw tooth tail form that was strengthened from the original single tail cone - the B-2 originally had the same shape as the B-21. The low level requirement was apparently added because the USAF decided that stealth would ultimately be defeated in the B-2's service life.

totoro said:
Anyway. B-21 had its winning design proposal chosen in October 2015.
First flight of the prototype seem to be expected around mid 2022. Guessing the exact month is, of course, impossible.

The B-21 EMD program started in late Q2 of FY16. They have two aircraft already in the pipeline. An FY-22 first flight would make it roughly 6 years from when they initiated work on the EMD. But reading between the lines of some of the things that have been said/written, it appears that they've set up the program to begin delivering mature aircraft relatively soon so the focus is on shortening the second half of the development program when you are testing and maturing the systems and getting ready to hand a relatively mature system to the operators. If they can do that by FY-26-27 then that would be pretty good given the current trend in complex combat aircraft programs stretching out years. And of course, if they can do that by sticking to the APUC estimates then that would be even better. So probably more important would be to see how the program is tracking to delivering the ultimate capability and hardware/software mix/maturity that the USAF is going to declare the system operational with. Encouraging that they've been consistently stating, for the last couple of years (updates), that the program is tracking to cost and schedule with the latter being more than just first flight or roll-out and likely also factoring in other more important milestones (like IOC).
Last edited: Mar 1, 2021 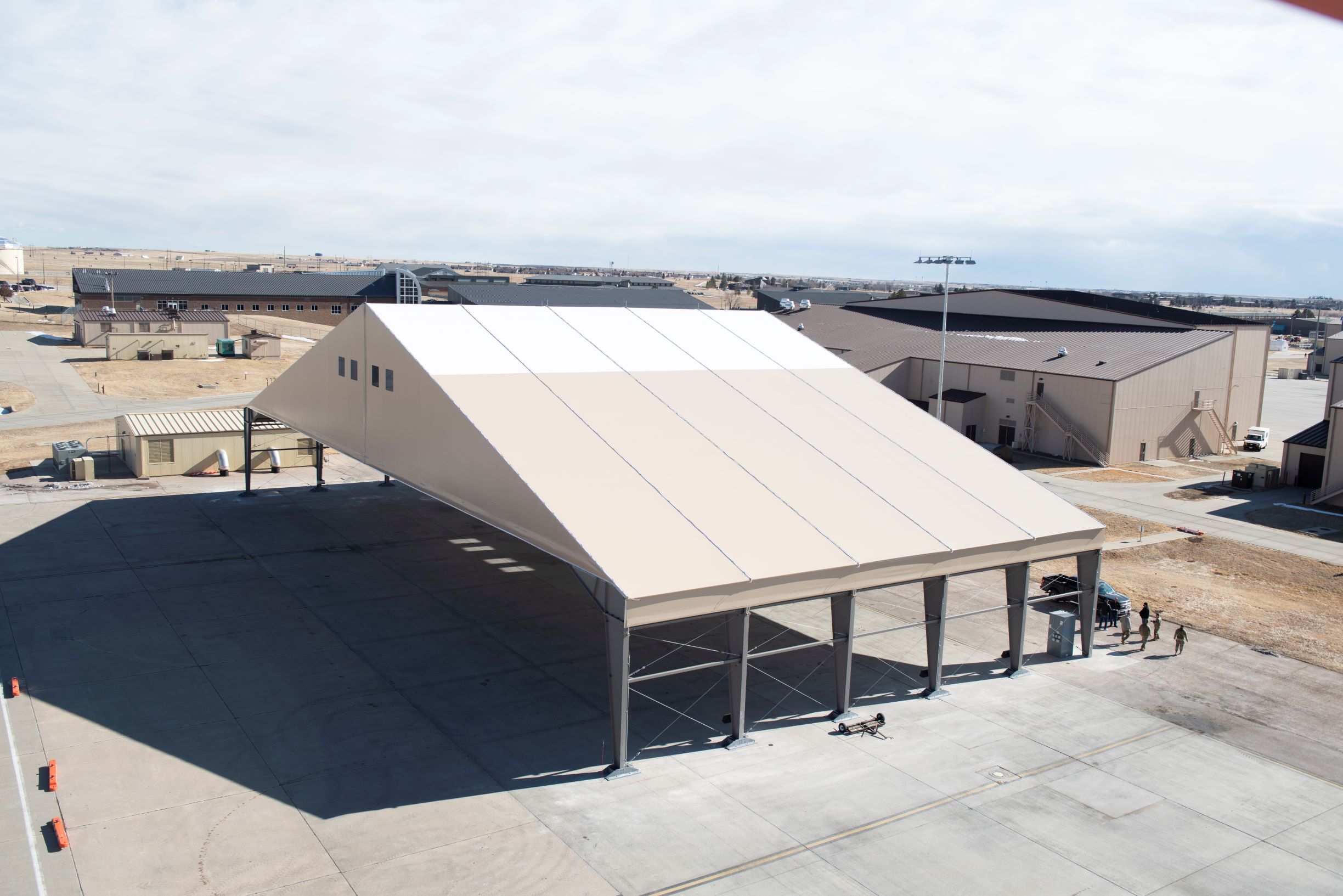 It seem to be more compact than the B-2, it could be 19 meters lenght and 40/42 meters wingspan, I don't think it could be less than 19 meters lenght with the need of a big weapon bay with the size of futur weapon like the hypersonic missile. This size is suprising it is more like a big fighter than a bomber, with two enhanced F-135 engine like, it would have a good amount of power.
T

Remember that those kind of tensioned structures (and I wonder why they didn't go for aluminum to ease deployment) are modular. This being a test article, it might only be representative of the production design and could have been restricted in size by the surface area allocated for the test.

The stand alone wings apart from the diamond mainframe will be proportionally larger since it doesnt have the saw tooth back end.
D

The stand alone wings apart from the diamond mainframe will be proportionally larger since it doesnt have the saw tooth back end.
Click to expand...

An experimental, temporary shelter for the B-21 recently erected at Ellsworth Air Force Base, S.D., which appeared in press release photos to be substantially smaller than B-2 hangars (and suggested a smaller size for the B-21), is actually 200 feet wide by 100 feet deep, the Air Force said in response to a query. That makes it large enough to accommodate the B-2, which has a wingspan of 172 feet and a length of 59 feet, and reveals nothing about the dimensions of the B-21.
Click to expand...

A temporary runway shelter being tested for the secret B-21 bomber will also be large enough to protect B-2 bombers from the elements, according to information provided by the Air Force.

Lol its pretty cold and bleak up there.

RavenOne said:
Lol its pretty cold and bleak up there.

It's still cold up there till the end of May. Back in the day I attended the first field training held at EL. The training manual was written for Lackland and Tyndall, so we showed up with only shorts and tee shirts for PT gear. Needless to say that first PT session at oh dark thirty in 30 degree weather was rather chilly...
Last edited: Mar 10, 2021

When are they going to show it to us!!! This is like pak-fa reveal all over again!

Well a years time officially but not anytime this year Even though in principle it should be flying December this year but with Covid and stuff ....nope.

Unofficially I and others think the prototype has already been flying least in last couple of years.

I could have sworn I read somewhere the public reveal next year is a production bird not prototype?

Bounce said:
I could have sworn I read somewhere the public reveal next year is a production bird not prototype?
Click to expand...

There is NO prototype.

All units, even #1, #2 which won't fly are production units. They use the same tooling and processes as upcoming active operational units will utilize.
Even though they'll mostly support OT&E.(which requires actual production aircraft rather than demonstrators) 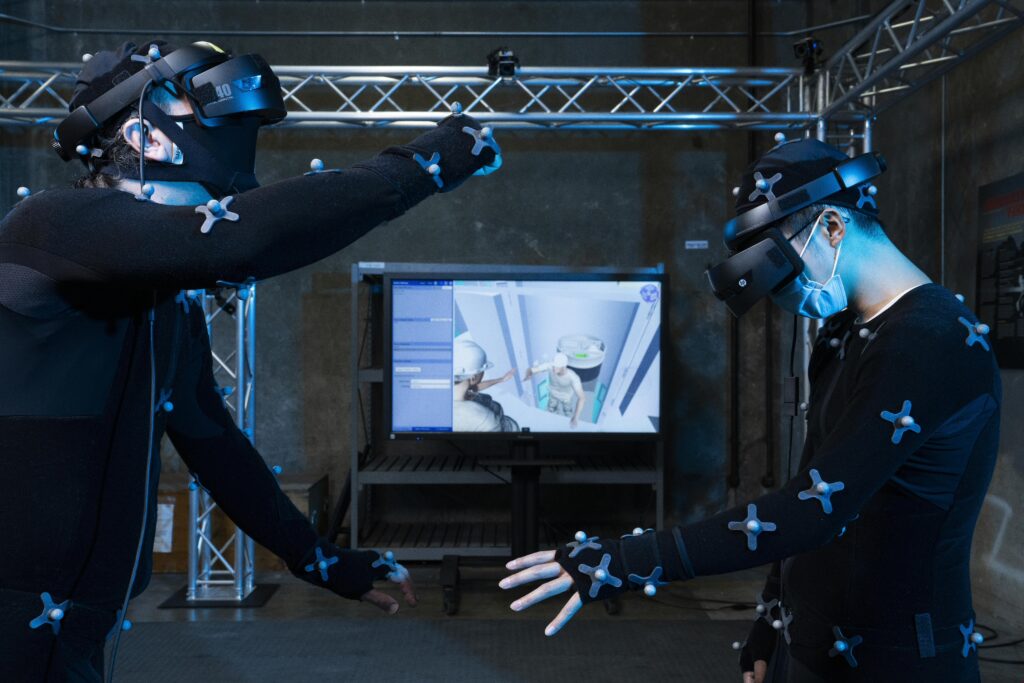 Early Risk Reduction For The Bomber Of The Future

With two B-21 test articles in production in Palmdale, Northrop Grumman will soon be flying a digital marvel of the 21st Century.

Rep. Adam Smith, who's excoriated the F-35, said the B-21 bomber is “on time, on budget, and they're making it work in a very intelligent way.”