taildragger said:
I've read that the F-82's adoption of the Allison engine was driven by the unavailability of US-built Merlins ...
Click to expand...

How did the Allison engine in the P-51H compare with earlier Allisons?
How did horsepower compare with Merlins?
I am especially curious about manifold boost pressures and performance at higher altitudes.
Click to expand...

Justo Miranda said:
Assigned to 336FS, 4FG, 8AF USAAF. This aircraft was a specially modified P-51D Mustang. It had its fuselage fuel tanks removed, a second seat fitted in the rear for the radar operator and mounted a radar antenna on the starboard wing. This aircraft was the personal mount of Colonel Everett W. Stewart.
Click to expand...

Damn, that radar looks more like a German installation than anything used by the Allies. Any information as to what radar was fitted?

It reminds me of the radar here:

To combat the German ‘Winter Blitz’ (June-December 1940) there was a proposal to equip the Spitfires, Hurricanes and Typhoons with a radar set specifically designed for operation in single-seat night fighters.

In 1941, the EMI engineering team developed the AI Mk.VI, one 10 Kw Airborne Interception radar, with 500 ft to 3 miles detection range and automatic range strobe, dispensing with the need for an operator.

In April 1942 the new radar was tested in combat by some Defiants Mk.II of the Nº 264 Sqn and the order for twelve Hurricane Mk.IIC (NF), fitted with AI Mk.VI radar, was placed.

The prototype (BN288) flew on June 1942, but early flight trials with the Mk.VI radar set showed an undesirable shortcoming: the night vision of the pilot would be quickly destroyed by the radar screen glare.

Air Military publication, written in September 1943, describes the difficult task of watching the 4-inch diameter cathode-ray tube and looking out in the darkness for the enemy.

The Germans partially solved the problem using anti-glare red filters in the radar screen, anti-glare red pilot goggles and ultra-violet illumination for the instrument panel of their single-seat night fighters.

In November 1942 six Hurricanes Mk.IIC (NF), fitted with wing-mounted transmitting dipoles type 69, Azimuth dipoles vertically polarised and elevation antennas type 29, were delivered to the Nº 245 Sqn and another six to the Nº 247 Sqn for operational trials.

The new fighter was found top-heavy and difficult to handle, the drag generated by the antennae and the long-range fuel tanks required to give extended patrol endurance, considerably reducing the top speed and the airplane was unable to catch the new German night intruders Junkers Ju 88 A-4.

On March 1943 the Typhoon Mk.IB (R7881) was modified by Hawker with the installation, into the starboard wing fuel tank housing, of the AI Mk.IV radar with automatic-range auto-strobing set.

On April 1943 the radar was evaluated at the Royal Aircraft Establishment (RAE).

In November the prototype, fitted with a four-bladed Rotol airscrew and underwing identification stripes, was operational tested over London by FIU pilots, reaching 368 mph top speed.

At the end of 1943 the pressing need for faster night fighters may have had decreased with the availability of the Mosquito NF series.

It was considered that flying at night while operating radar would have an excessive workload for the pilot and the project was discontinued.

One source says that the aircraft crashed at Kitzingen Army Airfield in Bavaria on 15 May 1946. AFAIK, only the 10th PRG operated Mustangs from Kitzingen. Perhaps to odd-ball 44-72210 became a hack for a photo-recon squadron after WW2?

But more sources say that 44-72210 was damaged on the same day at Kitzeugen. With Lt Hardy M Smith at the controls, 44-72210 suffered Cat 2 damage in a taxiing accident.

I found a 1956 newpaper mention of a Capt Hardy M. Smith who had served in the ETO before ending up at Elmendorf AFB with the 4th AACS Squadron, Mobile (a ground radio unit). But I find no 'Kitzeugen' in Germany - beyond contemporay US media reports. (Does anyone know if 'Kitzeugen' was an old, alternative spelling of Kitzingen?)

More likely it's a misspeling of Kitzingen. -ingen is a pretty common name ending (It basically means Kitz's place) , Kitz-eugen looks un-German to me. Also the only mentions of it are in articles related to 44-72210, so some report about it is presumably the source of the misspelling.
E

Justo, I wanted to thank you for those posts on radar for single-engined fighters. I definitely learned something. After looking at how they cut up a P-51D, I have to wonder if a two-seat conversion of a P-51B would have made more sense.

A few more to add:

This is a P-51D serial 44-73099 fitted with an experimental Aerojet "Superperformance" rocket engine. The 75 gallon wing tanks contain the fuel. This is a hypergolic one consisting of 65% RFNA and 35% Aniline. The tanks are permanently mounted. The engine was rated for 1300 lbs. thrust but failed to deliver the full value in testing. The installation weighed 1090 lbs., including fuel.
Test pilot Bob Chilton flew the plane several times and achieved 513 mph at 21,000 feet, about a 100 mph improvement in speed.
On at least one occasion fumes from the fuel entered the cockpit, and the whole test program was deemed too dangerous and unnecessary for operational use. 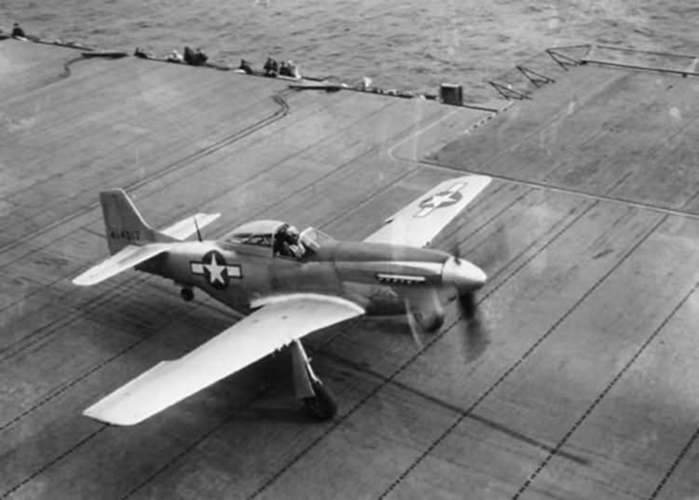 The navalized P-51 was tried with launch and landings on the USS Shangri La in late 1944 as seen here. The results were that the pilot's view was poor during most stages of launch and landing, that the plane had just an 8 mph window of speed it had to maintain on landing, and the landing gear had too much rebound. The plane was equipped with an arresting hook and catapult hook up points.

Another I don't have a photo I can post is a P-51B serial 42-10675WW (War Weary) that was converted to an ECM plane with a Perfectos set installed. Antennas several feet long were placed mid-wing with large insulators at their base, along with two similar antenna on the fuselage. The plane was with the 353th FG, 350th FS.

There were also three "lightweight" variants of the P-51, the F, G, and J. These differed in what engine was used but were otherwise similar. They had a new wing profile and smaller wheels on the landing gear. These features went into the production P-51H. They were also built to a different loading standard and had just 4 x .50 machineguns. A new low drag bubble canopy was installed (another P-51H feature).
The engines used were:
F Packard Merlin V-1650
G Merlin RM14SM
J Allison V-1710-119 (the first model with good high altitude performance but horribly unreliable in 1944-45)

Weight was shaved by about 1600 lbs. off the D model and the F proved capable of about 490 mph.

Just a few of these were made. A few F models were given to the British as the Mustang V.
Last edited: Mar 26, 2021