A couple of designs from JP4 magazine

Air Metal AM-C 111 (Germany). First flight was scheduled for 1977. Estimated production: 500 aircraft from 1977 to 1986. Turkey and Malaisya were very interested in the project.


SAAB considered that CASA 212 was no rival for its design so it had a bright future.

Similar in layout and time frame :

Pilatus launched a sales subsidiary with the munich, german based Poligrat
development in 1973, to sell a twin-engined STOL transport, called the
Master Porter PD-01, which was expected to enter the market in 1976
and would have been sold as completet aircraft or as a kit for local assembly.
(AviationWeek 4/74)

Very interesting projects, the Pilatus Master Porter is similar to the CASA C-212 Aviocar while the Air Metal AM-C 111 looks close to the Let 410/610 series. It is my personal opinion, of course
C

This aircraft has wings with 3-section slats and double-slotted flaps braced to stub wings carrying fixed levered main wheels, spoilers ahead of each aileron, nose for baggage or radar and a castoring nose-wheel.

This is a Russian-built aircraft, the Myasishchyev MM-1 which was based on the Air-Metal AM-C 111.
It was to have flown some time after SEPT 1993 (I think), but I haven't any further information.

Well done, Chuck and thanks a lot for that valuable info!

STOL transports weren't just interesting for commercial use, as can be seen by
this project, the Potez 870, which was intended as an army cooperation a/c,
with quite an impressive ground attack capability.
The drawing is , I think from "Planeurs et Avions", Christian Castello, I'm not
sure, but the copy was among other copies from that book ... :

also the Dornier DO-33 was VTOL transport aircraft project.

Interesting how all the different aircraft start to look the same - I guess the same problem often ends up with the same solution. Another to add to the list (and this one made it into service) was the GAF N-22/N-24 Nomad:

It was operated in both civilian and military roles by a couple of countries. 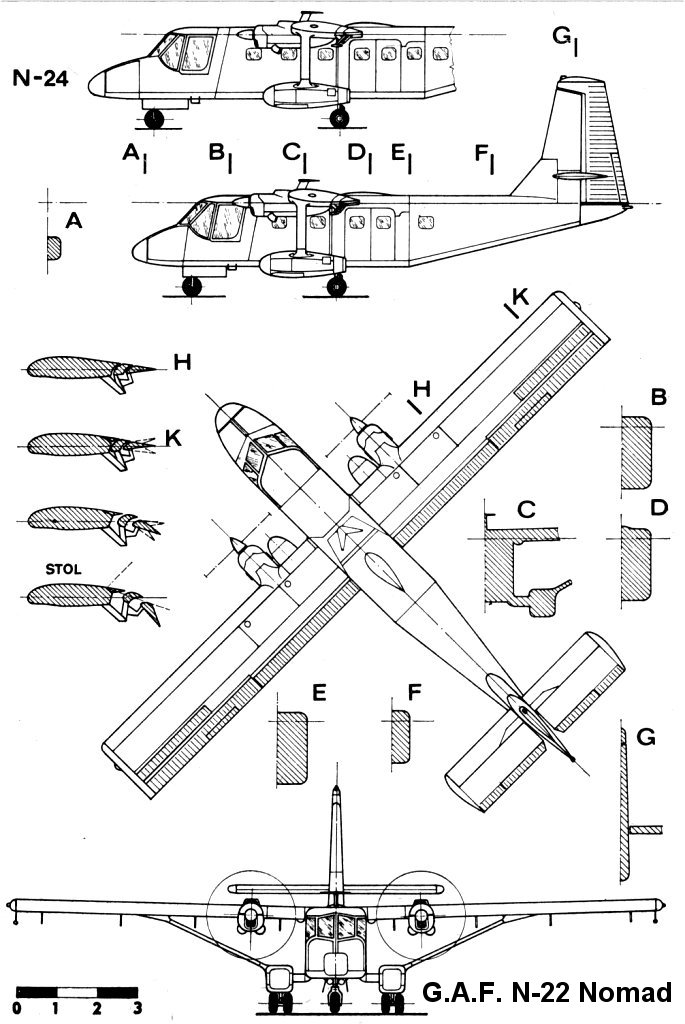 On Aviation Magazine Number 516, 15 June 1969 I have seen pics from a model of the SOCATA Sherpa. The model depicted it is a clone of the IAI Arava

Are both types related?

WHAT ? WHERE ?? WHEN ??
More infos, please, especially as SOCATA includes Morane Saulnier !
The only french Arava "clone" I know, is the SIPA 270 Présence,
the project first shown to the public in 1960, so maybe the Arava
is in fact a clone of the SIPA !

Just found : A brazilian project, the Embraer EMB-500, powered by four
PT-6A, fitted with a rear loading ramp. As a pure passenger lay-out fitted
with 30 seats.

“Turboprop DC-3 replacement is expected to be in prototype form by the end of the year. "Typhon" is up to 26-passenger third-level airliner from Aero Southwest Corp., Santa Maria, Calif. Powerplants will be P&W PT6A-27 units, producing 652-eshp each. Predicted performance calls for a cruise speed of 225-mph at 10,000-ft, payload 3,460-lbs, range 860-miles.”

A couple of Aermacchi proposals. MB-331 (piston engines) and MB-331T (turboprop). Both were intended for both passenger and cargo roles. Very simplified desgn, with fixed undercarriage. 1968. Dimension for the -T version were lenght 13,4 m, span 18,00 m. The basic version was smaller.

Would the propsed but never-built CV-10 version of the Bronco fit in this category? I'll try and post some info when I get home.
C

From Flying Review 5/65 an early layout of the famous Short Skyvan
and (especially for Tophe !) the Short PD.15.

And here a type, which, although in its basic form not renowned for STOL capabilities,
should be improved by Dart 10-1 engines, improved high lift devices, spoilers and a
new brake system to achieve better short field performance for the military version
of the Handley Page Herald 500, the HP.131 :
(from Flying Review 6/65, profile only)

Had we included the Ahrens AR-404 yet? Only two were ever built, and it was thought that it might replace the C-2 Greyhound in the Carrier On-Board Delivery role.

and there was also Ahrens AR-402 STOL transport aircraft
project with only two engines.

Slightly off-topic, I know ... but as Chuck mentioned, that the
AR 404 was proposed as a Greyhound replacement, I thought,
it might be interessting, what I found in Air & Cosmos '68 :
Did you know, that a british twin engined civil STOL aircraft
anded on and took off again from a british carrier ?
A BN-2 Islander landed on May 26th 1968 on the HMS Hermes
and was launched again, without the use of arresting gear and
catapult. Ok, compared to the Hercules carrier trials, not really
a great achievement .... ;D

IAI submission chosen in principle by Federal Express of USA against competition from Saab (Sweden) and Ayres (USA) in mid-1998 as replacement for Fokker Friendship parcel transports.
Click to expand...

And here comes a candidate from Iran - the AII (Aviation Industries of Iran) AVA-404, planned with two Walter M 601E turboprops. Is there somebody who needs the estimated dimensions, weights and performances? Next Wednesday I have to give back the borrowed JAWA 2001-2002 ...

Just found in RAF Flying Review 3/1962 : The Ryan BLC.7 , mainly intended
as a STOL executive aircraft, but also proposed for military use.
It would have been powered by two Allison T63 turboprops and have used
boundary layer control.

Jemiba said:
Just found in RAF Flying Review 3/1962 : The Ryan BLC.7 , mainly intended
as a STOL executive aircraft, but also proposed for military use.
It would have been powered by two Allison T63 turboprops and have used
boundary layer control.
Click to expand...

Within the "harvest" of my visit to the States Library :
The Wagner W-18, designed around 1963, with the maiden
flight expected for 1965, was intended as a DC-3 replacement.
A new kind of boundary layer control was envisaged, with span-
wise ducts in the very small high-aspect-ratio wings. These
ducts would have been fed with air from an APU in the tail and
fuel should be burned in it, to accelerate the airflow.

Drawing from Flight International, May 1964

The design of such aircraft hasn't changed for about 50 years !
Here's a project that's older than 50 years, the Chase 3/4, htat
was shown in Flieger 1953. Looks, as it could be competitive still
today ...