I am looking for information on the Mars spacecraft that would have carried men to mars as planned for the post Apollo period. The MEM was to have been the Aeronuetronic lifting body from a 1964 paper presented at the AIAA/NASA 3rd Manned Spaceflight Meeting at Houston. The author was Temple W. Newman of Philco Ford.

This design of MEM was to be used on the Orion Nuclear Pulse spacecraft as well as other designs. The Mission Module/spacecraft I am interested in was, I believe, a North American Aviation proposal.

If anyone could help furnish me with illustrations I would be very grateful.

I have attached the only diagram that I have, along with the MEM diagram

Is this what you are looking for?

the MMM is from NAA

Thank you Michel Van and Flateric for your replies, especially the RCS layout for the MEM. It is the NAA mission module that I really need information on. The trouble is with the passing years, archives are destroyed or are not available electronically. Thanks again.

I'll try to dig some stuff.

Many thanks for this interesting stuff, Darklord!!

back to that NAA Mission Module (see picture MMM.jpg)
the Mission module is almost same of a Flyby Mission proposal by NAA

after launch to Mars flyby the empty S-IIB stage is separate
crew dock the CSM to MM and move in it
then the CSM is move reeled out by (tethers) to a distance of approximately 150 feet.
The flyby craft and CSM revolve about their center of mass four times per minute to produce one terrestrial gravity.
note that in MMM they use centrifuge like MORL instat

after fly by they start rotate the spacecraft again
At expedition's end the crew reels in and enters the CSM, and separates the flyby craft.
They then cast off the CSM's drum-shaped Service Module
and enter Earth's atmosphere in the conical Command Module.

This may be of interest.
Mars Symposium - NEW DATE

You have some top people speaking 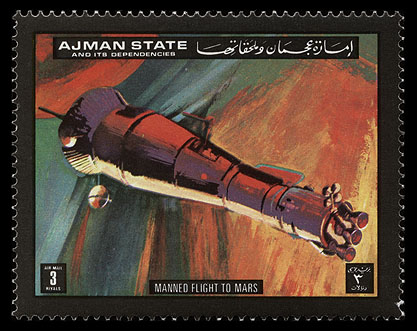 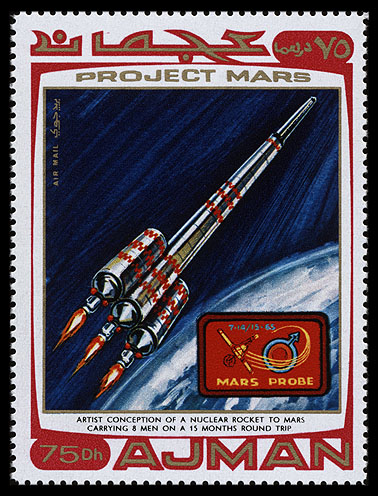 the Ship launch mass is around 400 tons
the biggest mass are the three S-IIN (point 7&8 on picture) they launch the Ship to Mars
after that the S-IIN are dropped
at Mars the bi-conical Space ship (point 6) made a Aerodynamic braking into Mars Orbit
with around 7-10 G for Crew of 6 men (sorry this 1960's no woman on board : )

the MEM (point 1) are several Proposals
like the Philco MEM or NAA PEM on basis of a Lifting body.
PEM = Planetary Excursion Module
3-4 men land on Mars while 2-3 remain on board
on end of Mars mission PEM ascent stage dock on Mars ship
after the PEM crew and Mars sample transfer, PEM is dropped

they got 2 men centrifuge on board for artificial gravity, around Solar stormshelter

near Earth the Crew goes in 6 men Apollo capsule (point 4)
they separate with Earthbreaking stage ( point 5) from Space ship
with use Lh2/lox Engine to reduce reentry speed on that of a Apollo mission.

...Reminding me more and more of MPC's "Pilgrim/Observer" for some reason.

OM said:
...Reminding me more and more of MPC's "Pilgrim/Observer" for some reason.
Click to expand... 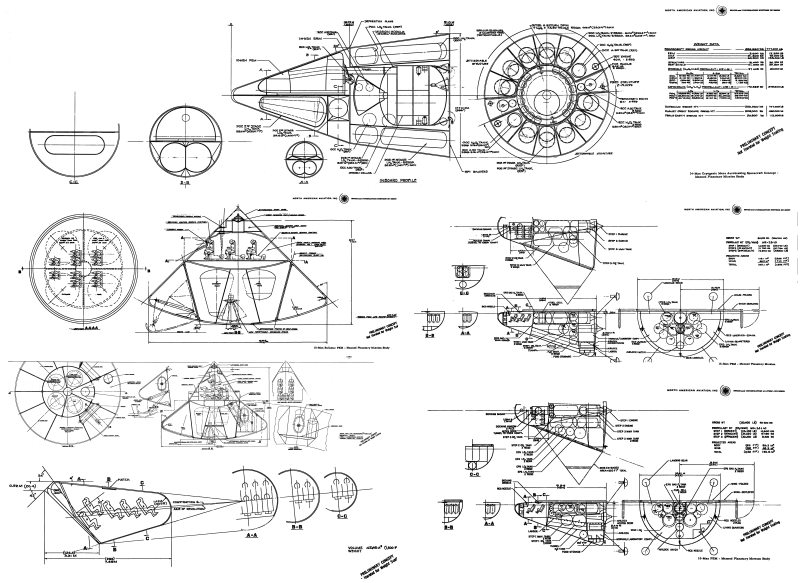 while first design is 10 meter ø for Saturn V launch
need this 17 meter ø Spaceship NOVA launcher
an i don't have Idea why the need 14 Astronauts for Mission
of 10 men land on Mars, is this for Mars Surface base personnel ?

and had NAA even a Nova Launcher proposal ?

an i don't have Idea why the need 14 Astronauts for Mission
of 10 men land on Mars, is this for Mars Surface base personnel ?
Click to expand...

...This one's pretty simple. Most, if not all of the big Mars landing proposals called for nearly 24/7 surface activities, with crews divided into anywhere from four to eight-hour shifts. The lower the number of crew, the longer the EVAs. IIRC, with a 4-man crew on one of the uprated Apollo to Mars concepts, a four-man crew would be doing 8-9 hour shifts that were staggered so that there were three crew awake - one or two on EVA - while one slept, Note that these small-crew rotations were intended to be heavily choreographed, with practically every minute of their stay planned in advance with very little initial leeway for the unexpected and/or crew fatigue causing slowdowns and delays. These plans also were, IIRC, worked out in theory before the Skylab 4 "mutiny", which changed the way NASA looks at mission planning.

I think this is the place for this...

I was just perusing through the San Diego Air & Space Museum (SDASM) archives on Flickr, and came across this illustration of a Convair / General Dynamics eight-man capsule, which was posed a few years ago.

The caption for the image describes it as "Title:GD/Astronautics Art Details: Empire Study; Earth Re-Entry Vehicle - 8 Man Date: 02/19/1964." As the caption states, this apparently came about from the Early Manned Planetary-Interplanetary Roundtrip Expeditions (EMPIRE) project/studies.
https://flic.kr/p/NuXSBA