The late Marcel Jurca was one of France's most prolific homebuilt aircraft designers, responsible for a series of mostly high-performance and often aerobatic designs generally of wooden construction. He also designed a series of replica warbirds from a 2/3 scale P51 Mustang up to full-scale Bf109 and Spitfire. Plans for many of these designs are still available from http://www.marcel-jurca.com. Here are four somewhat unusual designs that never became available to homebuilders. The source of this info and these images is the web site above--I have paper and electronic files of other French homebuilts to share, but I thought I'd get this thread started.

MJ-14 Fourtouna: The prototype of this racy, single-place, retractable-gear, single-engine (100-160 horsepower) was started in the 1970s but is still incomplete. Plans were complete but never made available in the absence of a flying prototype to work out the kinks.

MJ-22 Bi-Tempête: The MJ-22 is a twin-fuselage (hey, Tophe!), twin-engine development of Jurca's iconic aerobatic MJ-02 Tempête, his most popular single-place design with well over 50 completed and flown. The MJ-22 was an initial design study only, plans were never completed and none were built, the photo below is an artist's impression only. Note the signature MJ-02 rudder profile reputedly inspired by the Douglas AD-1 Skyraider.

MJ-23 Orage: This high-performance racer and aerobat was intended for a 200-300 horsepower engine with the option of flaps and retractable gear. The low-powered version reused the wing from the MJ-02, the high-powered version the wings from the two-seat MJ-55 Biso. Plans were never completed, so none built.

MJ-6 Crivats twin: Here's something you don't see every day: a tandem two-seat light twin, 2 x 115-150 horsepower engines, retractable tricycle gear. Plans were completed but the prototype was not so plans were never made available to amateur builders.

Here is Marcel Jurca's extraordinary MJ.54 Silas amateur-built cargo plane. This was apparently Jurca's solution to the neverending quest for a flying car--a plane that could carry an Aixam microcar as cargo! From the attached clippings, I gather that the first flight was on 30 April 1997 and the prototype was powered with an unspecified 250 hp engine. The photo with the red carped is quite recent--from last year's annual fly-in at La Ferte-Alais (LFFQ), France on May 26, 2012. I don't have exact specs or the full story behind this one (it is not even mentioned on the Marcel Jurca site) and would love some help tracking down more information.

The MJ 7
I don't remenber the English magazine Sorry

I have always liked Marcel Jurca's little MJ-2 Tempête single-seater more than his big two-seaters usually built with big Lycoming or Continental engines of 180 hp or more. That inspired me to dig a little more and it turns out that his tandem-seat MJ-5 Sirocco actually first flew with a C-90 and still lists engines as small as a 115 hp O-235. There also appears to have been an effort to built an MJ-5 "Light" as the MJ-52 Zéphyr. The Jurca site has only this info:

Wikipedia says this (not altogether consistent with the site info) on the MJ-5 Sirocco page:

I am curious what changes were made to the MJ-5 to make the MJ-52. It appears that the gear was fixed and there were no flaps (retractable gear and flaps being optional on the MJ-5). Obviously a smaller engine was used and perhaps a smaller fuel tank, lighter construction, maybe extended wings? If anyone has any info tucked away on this one, especially photos, I'd love to learn more.

Responding to myself, I found this over at http://1000aircraftphotos.com/Contributions/VanTilborg/11907.htm

MJ-52 Zéphyr: The MJ-52 had a much lighter structure allowing engines in the 40-70hp range, such as VW, Continental A65, etc. A prototype was reportedly under construction in France in 1989-1990, but was almost certainly not completed.
Click to expand... 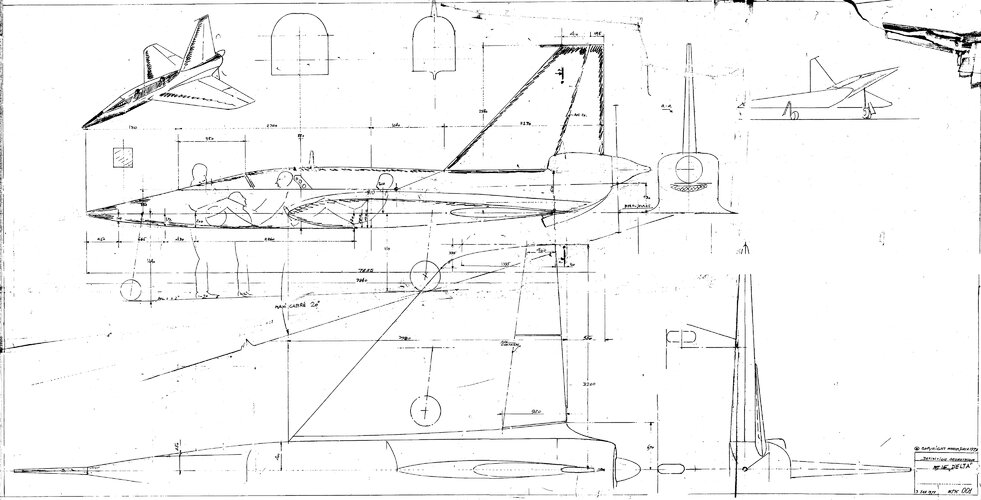 The MJ-51 Sperocco first flew on 2 June 2019 and won an award at Oshkosh 2021. It uses the same wing as Jurca's P-51 replica, but with a longer fuselage containing two seats in tandem. One long, bubble canopy provides access to both seats. The grey, American-built prototype is powered by a 260 horsepower Lycoming IO-540, flat 6 engine.
Last edited: Oct 27, 2021
F

The following chatty text may perhaps be of some interest... https://ingeniumcanada.org/channel/...opher-barnard-falconar-and-another-giant-leap

The source please my dear Sienar ?.
Click to expand...

The long, pointy noses on the MJ-6 twin and MJ-15 Delta seem to be primarily mounts for nose wheels. The pointy nose contribute to the Mirage aesthetic on the Delta.
W

WIlli-Bill said:
From the looks of the pictures & my memory I suspect this is from the Old Air Progress Homebuilt magazine
Click to expand...