PW1120 was probably less fuel efficient than the F100 as the fan was cut down and it was a lower bypass ratio.
Click to expand...

That's what I vaguely remember, too, from my Fana de l'aviation readings... the PW1120 was a heavier, more rugged, less efficient variant of F110. Kind of big brute of engine, not very refined. At the beginning Israel probably wanted a F404 and some kind of Grippen LWF, but the Lavi soon took a different path. By contrast a big and powerful engine make sense with Zen suggestion

Really big drop tanks.....and lots of them.
The minus was the drag increases and pylons taken up....along with the hidden G-Limits.
But come the need to could jettison that lot and return to a clean fighter.
Click to expand...

Either you're nimble & lightweight with a small engine (F404) or you go powerful to drag a lot of external tanks and drop that to go into air defence mode.
Just ask the Swedes - Viggen to Grippen.

In this context the Lavi is closer from the Viggen, another massive aircraft with a powerful engine. And just like it, it can go J- (air defence) or AJ (ground attack with a boatload of A2G ordonance and drop tanks).
Last edited: Mar 29, 2020
Z

PW1120 is a cut down fan stage turbofan . Just enough to keep the casing cool and just small enough diameter to fit in place of J79.
Engine was intended for both Lavi and F4 upgrade.
A

This is the best video I've run across on the Lavi and it's design. It summarizes the design section of the book Lavi, the United States, Israel, and a Controversial Fighter Jet. If you're interested in the Lavi it's a good read. The section on engine choice starts at 14:34 (of 23:47).

Would it also not make sense for the F-15A/B to have a fully funded Air to Ground suite? I never quite understood how the USAF could replace a multirole F-4 with a single mission F-15 and got Congress to approve it. How about a two-seat F-15 to directly replace the F-4 on a one for one basis, with the A-7X/F and F-5G as more "attritable" airframes; A surviving AH-56 could also help plug any remaining CAS holes in the Fulda Gap.

The F-16 was the Phantom replacement. And later the A-7 replacement. It was also supposed to replace the A-10, but that didn't work out. Heck, if the F-16xl had won over the F-15E it would have replaced the F-111 too.

The F-15 was to meet a new requirement for an uncompromized air superiority fighter, hence "not a pound for air to ground". It replaced the F-4 in the fighter role, but the multi-role mission of the F-4 went to the F-16. Congress approved it because the Century series and the F-4 proved to be less effective in air combat than anticipated. The F-15 (and F-14) were meant to correct that shortcoming of the F-4.

isayyo2 said:
Would it also not make sense for the F-15A/B to have a fully funded Air to Ground suite? I never quite understood how the USAF could replace a multirole F-4 with a single mission F-15 and got Congress to approve it. How about a two-seat F-15 to directly replace the F-4 on a one for one basis, with the A-7X/F and F-5G as more "attritable" airframes; A surviving AH-56 could also help plug any remaining CAS holes in the Fulda Gap.

That's more or less the idea I had in mind regarding this thread, the F-15 becoming a true Phantom replacement. And things are a lot more interesting without the boring F-16 replaces everything that happened OTL.

To be a bit of a spoilsport/pedantic HOW do you get LWF cancelled in the first place? Do we have a plausible set of events for a point of divergence?
A

Colonel Boyd is shot down in Korea - maybe ? https://en.wikipedia.org/wiki/John_Boyd_(military_strategist)

Alternatively, the Air Force got "mani pulite" on the Fighter Mafia and erase them from the face of Earth

Alternatively, the Air Force got "mani pulite" on the Fighter Mafia and erase them from the face of Earth

I think better success over Vietnam would take most of the wind out the Fighter Mafia. Whether that success stems from increased training or a less restrictive ROE, I'm not sure. Does anyone know how many F-4 squadrons transitioned to F-16's?

Without the LWF comp is their any chance of the F-16 coming into being as a private venture like the F-20 would later?

It's possible but with different circumstances it would likely fade away like the OTL F-20, unless there's a foreign nation that's willing to buy and finance it.
A

On the Navy side the Convair 200 and 218 would pull out a miniature F-35, only missing USAF. Depends from Rockwell XFV-12, too. The 218 would fill the F-18 vacuum - and perhaps allow the 200 to return even after CNO Zumwalt departure in 1974 when Rockwell screws up.
In turn this could screw the AV-8B and give the British Big wing Harrier a chance - for both RAF Mk.3s and SHAR.
Last edited: Mar 11, 2021

If you want to get a flavour of the world into which F14, F15 and F16 burst this old board wargame from the early 70s is a good starting point 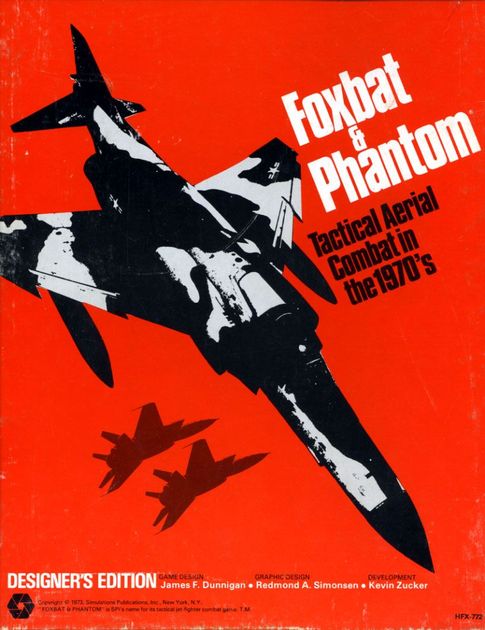 "Foxbat & Phantom" is a wargame simulation of tactical aerial combat in the 1970's. The game is basically a two player game but it can be modified to accommodate any number of players. Each player manipulates his aircraft on a grid which simulates air space. 255 counters. This game places two...

boardgamegeek.com
The title says it all

Both Vought and McDonnell Douglas were hoping that the F16/F18 LWF would be cancelled. They were waiting with updated air superiority versions of the F8 Crusader and the F4 Phantom.
From the NATO perspective as RAF and Bundesluftwaffe squadrons used F4s having the USAF and Belgium, Denmark and Netherlands introduce an F4F version would have been very welcome.
Israel the other big F16 user would have been happy to take more F4s.
The US Navy and Marines quite liked the F8 so that might have helped Vought but even here the F4 would have had the edge.
Such was the poor performance of early F14s that a fighter upgraded F4 might have done what the F18 later did.
You can forget the Convair 200.
Share:
Facebook Twitter Reddit Pinterest Tumblr WhatsApp Email Share Link