I don't know much about the competition between this and the Tomahawk - what were the reasons behind the selection of GD's design over Vought?

Andreas offers the following:
"The first attempt in February 1976 to launch a YBGM-110A prototype from a torpedo tube failed because of a tube malfunction, and on the second attempt, the missile's wing failed to deploy. Because the YBGM-109A had performed flawlessly on two launches, and was the less risky overall design, the U.S. Navy declared the BGM-109 the winner of the SLCM competition in March 1976, thus ending the BGM-110 development."

Hopefully this quote does not break the rules.

overscan said:
Erm, why is everyone so worried about breaking rules all of a sudden? ???

I always worry, as I want to be respectful of others work.
Not part of a conspiracy. More like scan-a-holics anonymous
with the Scan master Mark.

According to the Vought Heritage web site, in addition to the malfunctions, the latter attributed to a programming error, there were differences between the LVT and General Dynamics designs:

There were two engine companies that had products of the correct small size to fit the cruise missiles (Teledyne Engines in Toledo, Ohio, and Williams Engine in Michigan). The Williams company was very small but its engine was in a more mature state of development due to work on very small turbine engines used for the Army's man maneuver unit. LTV and General Dynamics (GD) both selected the Williams engine but the Navy wanted both engine companies involved in the fly-off competition. The Navy therefore assigned the Teledyne engine to the LTV Cruise Missile, despite unofficial protests by the company.

Another difference between the LTV and GD cruise missiles was the design approaches used to survive the harsh underwater submarine launch. LTV elected to design the missile structure to be rugged enough to withstand the pressures and shocks with no protective covers. GD elected to design a conventional light missile structure and to use a protective dispensable shell for the underwater launch. The GD design approach turned out to be a real advantage during the latter days of the program when air-launched cruise missile versions became popular. For air launch, the protective shell could be eliminated, making a lighter payload than the LTV version.
Click to expand...

The capsule-less nature certainly helps explain the choice to go for the characteristic rounded fins.
H

On topic: truly fascinating. But there is one thing I don't understand... Why was the Tomahawk considered the technologically less challenging option?
Click to expand...

If nothing else, the no-capsule torpedo-tube launch would be less well understood from the perspective of an air-breathing cruise missile than the encapsulated setup, which was quasi-developed at the time due to Harpoon development.

Test flight #1: torpedo tube failed, responsibility for that failure was deemed to be the Navy and not Vought

Test flight #2: 24 February-wings failed to deploy after the missile broached, Vought owned that one

Program cancelled on 8 March in favor of GD design, which was awarded the contract on 17 March. Vought had cost overruns and no successful tests during the flyoff to GDs two successful flights on 13 and 15 February. The flyoff goal was to demonstrate a successful transition from submerged launch to inflight cruise. Vought also used the Teledyne CAE 471-11DX turbofan engine, the loser of the engine competition. Tomahawk was the CNO-approved name for the succesful missile as far back as September 1975, it didn't belong solely to the GD missile. Had the Vought missile won, it would've been called Tomahawk.

Lots of info and images of many AGM-86, Tomahawk, SLCM, etc in the Air University book Evolution of the Cruise Missile, by Kenneth P. Werrell (1985). A bit dated, and it only deals with US weapons (except for a bit of WWII-era history of the concept and German weapons), but really great for historical info on pretty much everything that's not SENIOR PROM or the fielded AGM-129. Does get into the ASALM, ACM, and ATCM programs very briefly, and there are flight test logs for Tomahawk, AGM-86, X-10, Navajo, and Snark. I've got a PDF copy as well, it can be downloaded free here: http://www.au.af.mil/au/aul/aupress/Indexes/title_ndx_bks.htm#E If anyone can't access a .mil site and wants the PDF, let me know.

Here is another drawing I forgot to post the first time around,
also from the Vought Archives

A crude line drawing from

Wrap around fins were the rage during the 80's. I remember reading an article about them in Aerospace America. Has anybody ever got them to work?
T

They're a fairly popular solution on low-cost tube-launched munitions (artillery rockets, unguided A/G rockets, ATGMs), although most of these happen to be spin-stabilised, so that might have something to do with it as well.
S

Anyone know where the engine intake is? Could it be the the slot just behind the wing in the camo/trolley pic?

From AvWeek August 13, 1973
These are the other contenders. Sorry if these constitute OT!

The McD-D design looks more like TomaGlobalHawk with that bulged nose.

That bulged nose was probably like a bullet to the head for its chances of winning.

Probably didn't help torpedo tube clearance that much, unless the rest of the body is that much narrower than the other designs.

SOC said:
Probably didn't help torpedo tube clearance that much, unless the rest of the body is that much narrower than the other designs.
Click to expand...

Presuming the nose is 21" diameter it would have a lot less volume for things like fuel, avionics, warhead, etc. Unless you made it longer anyway but then that brings its own set of issues.

Ah, the caption says its encapsulated for launch. I assume that takes care of the clearance issues. Helps to read ;D

I'm guessing what we see are not actually fore and aft bulges as much as middle 'dent' to make room for the folding wing
One could argue that the folding wings on all these concepts rob the airframe of internal volume to a certain extent.
H

AeroFranz said:
I'm guessing what we see are not actually fore and aft bulges as much as middle 'dent' to make room for the folding wing
One could argue that the folding wings on all these concepts rob the airframe of internal volume to a certain extent.
Click to expand...

Yep - it's quite clear that the tail section begins to 'swell' back to the full diameter. Presumably the center section is noncircular in cross section, so the volume loss would not be as bad as our eyes say.

Hard to argue that the USN didn't go with the most attractive option, though.

Anyway, later on in the 80's McDonnell Douglas won a contract to build complete Tomahawk missiles.

McDonnell Douglas received a U.S. Navy contract to develop the guidance system for the Tomahawk cruise missile in 1975. Flight tests of the guidance system in 1976 required only 13 of 27 planned development flights to accomplish all its test goals. In 1982 the company won a contract to build complete missile bodies, joining General Dynamics as a dual source cruise missile producer. More than 1,000 Tomahawk missiles were produced by McDonnell Douglas between 1983 and 1995.
Click to expand...

From the San Diego Air & Space Museum (SDASM) photostream on Flickr, here's a promotional illustration of the Teledyne CAE Model 471 turbofan that was to be used for the LTV BGM-110. 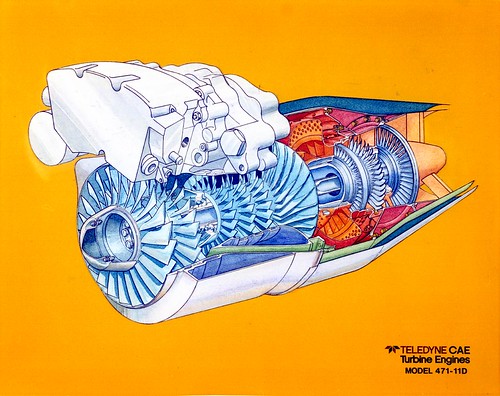 Here are a couple of more images to add to the knowledge base in this topic.
VAHF images, my scans.

Ditto! Thanks a lot Bill for your contribution in keeping the Vought legacy alive.

Thanks for the kind comments.
I have some interesting material
that does not fit on this great forum!


The first image shows the small charge blowing the covers off the engine inlet (bottom)
and fins.


The second image shows the fins deployed and the wing starting to swing into position.


The third image shows the wings and tail fins deployed ready for flight.


The fourth image confirms the Tomahawk name as you can see the the "Tomahawk Test Center" sign on
the wall in the background.


Nice colour pictures showing a ZBGM-110 mounted on a A-7 Corsair II.

Here are some publicity images of the YBGM-110 mounted on a factory fresh A-7E possibly 159301.
VAHF Archives.

They work on Viper Strike

Some more images for your files and viewing pleasure
VAHF archives

Images of a cut away mockup.

Finally a few images of the birds in manufacturing.
VAHF archives.


That's it for this go round.

Here is the structural drawing for the BGM-110 Tactical version.