Thanks heaps Bill, they look great!!

Courtesy of our very own Scott​
http://www.aerospaceprojectsreview.com/blog/?p=569
​

A deck spotting model photographed during the trip to Vought last week. 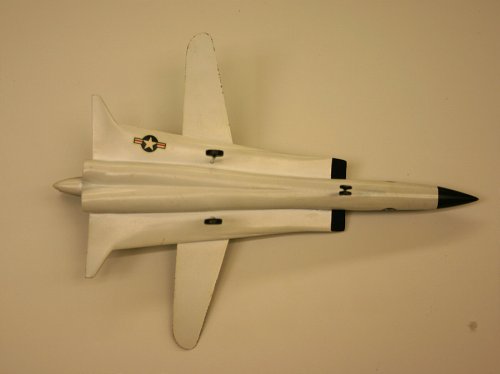 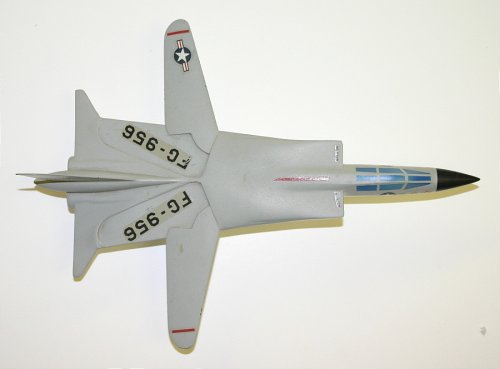 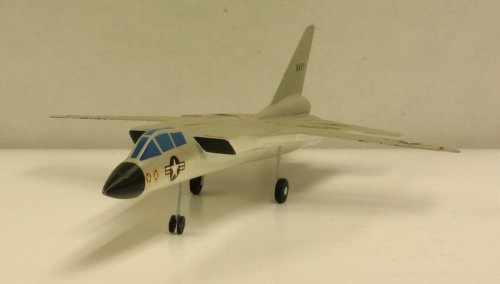 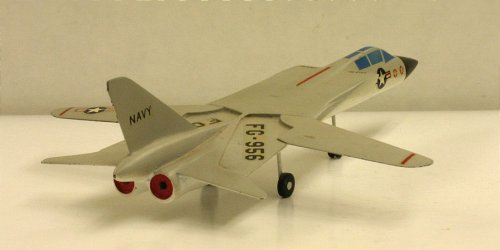 Skybolt said:
A hint (probably very definitive) on the company of origin of the four unattributed configuration tested at Langley and pictured above (they are unknown 1 to 4). A table included in one of documents pointed to by Gregory ( Working Paper, Summary of NACA/NASA variable sweep research and development leading to the F-111 (TFX)) lists the usage of Langley's tunnels and test facilities by company from 1958 to 1962. Apart form the three engine-makers (GE, P&W and Allison) involved, the airframe builders included are Republic, GD, NAA and McDonnel. So, since Republic and GD configuration are known, this leaves NAA and McD. BUT, NAA is explicitly listed for work on the A3J, which we know that was the configuration of choice for the early (1959) CAP exploratory work for the Navy. So, I may be wrong but I m 80 per cent sre that the 4 configurations are from McDonnel.
Comments ?
Click to expand...

Here is the direct link to the PDF. Definitely worth the read:

I think I was right,it seemed to be Model-193,a V/STOL fighter of 4/64 as Mr.Tony
Butler spoke about it in his book American Secret Projects : Fighters & Interceptors,
please see that report from NASA in May 1964; 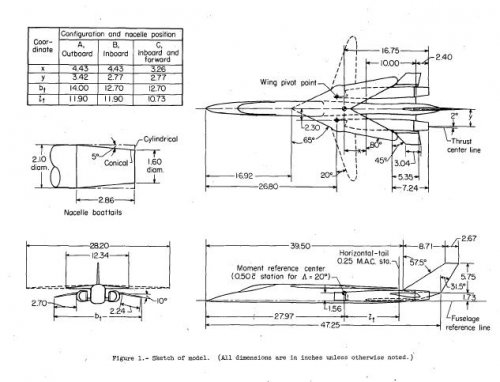 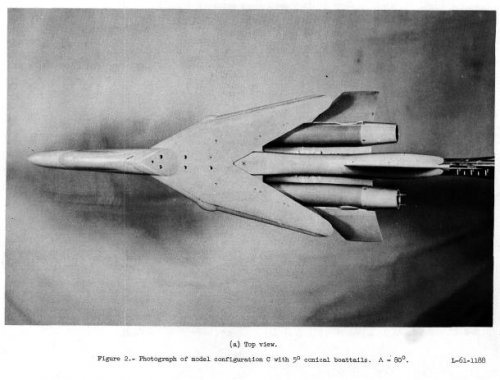 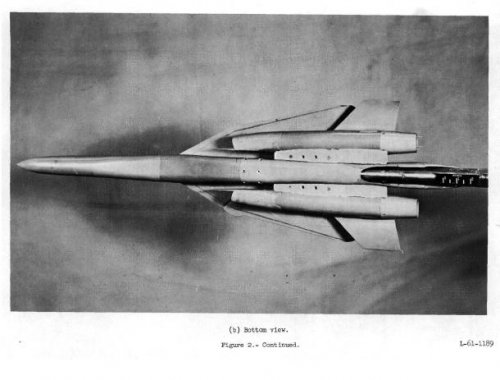 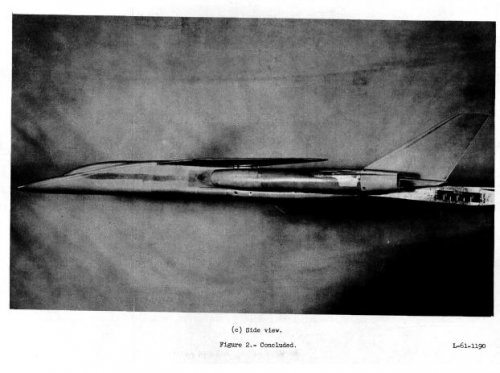 Looking at the Republic USAF variant mock-up it seems the main undercarriage retracted forwards into the wing roots, below the wing root intakes are what look like blister bays for a single AIM-9 with a retractable launcher (I assume one each side) which suggests there must be a main weapons bay (sized for a pair of B43s?) in that long fuselage somewhere- possibly in the area between the two sidewinder blisters, the forward undercarriage and the front of the external fuel tank shown in the diagram in reply #216...?

sferrin said:
Page 135 of American Secret Projects: Bombers, Attack etc. talks about Boeing's 818 entry and mentions that mockup "which may have represented the 1961 submission).
Click to expand...

If you mean December 1961 I am inclined to agree; the nose looks appropriate for the required 36 inch radar dish and it looks like it is within the 73ft length requirement. In addition, the length seems shorter and the frontal area larger than the 82.5ft and 24 sq ft respectively anticipated for the original USAF only SOR.183. The Republic entry is an interesting contrast. What we could be looking at with the Boeing tandem seat shoulder-intake mock-up is the first (joint) "winner" for the TFX saga..? I just wish there were more images and details of it! 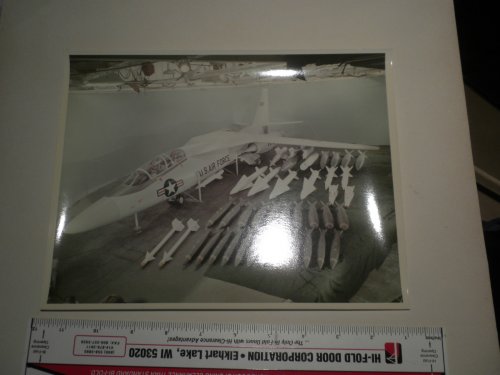 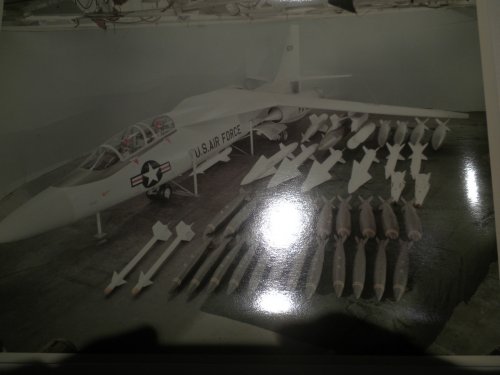 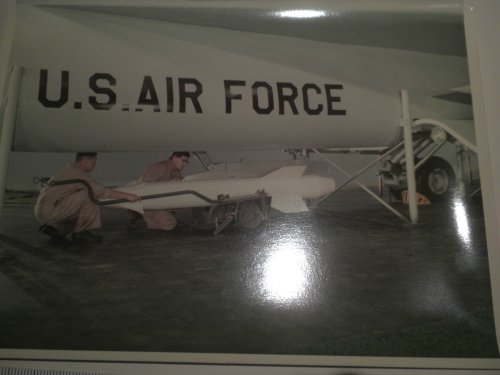 Did you take these pics?
Thanks for sharing with us!!

Will we see more?

P.S.If you did take these pics, is there any chance of more minus the camera flash :-[

Pics are from Ebay.


Sold, but buyer not confirmed. Hopefully one of us 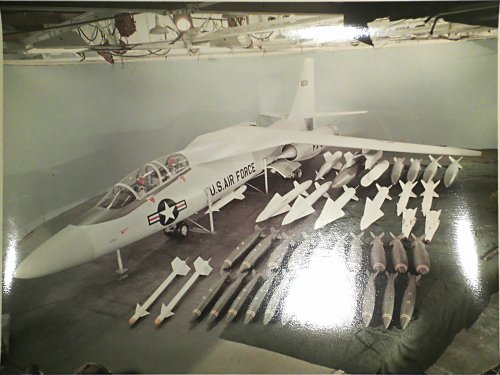 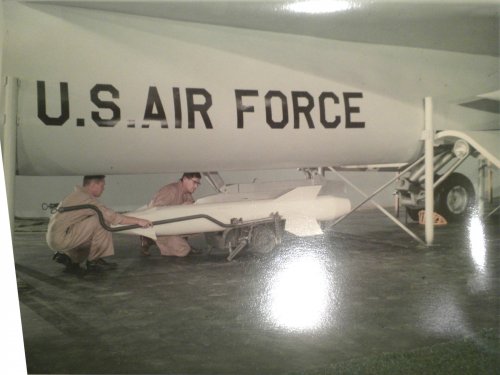 P.S.If you did take these pics, is there any chance of more minus the camera flash :-[

Thanks to an SPF member - scans of the Lockheed CL-590 mockup.

The original photos are faded in the centre, I made a quick attempt to colour correct. 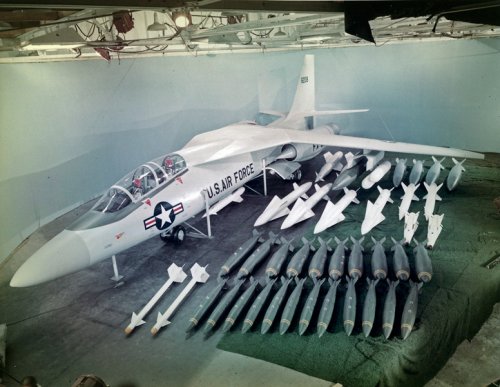 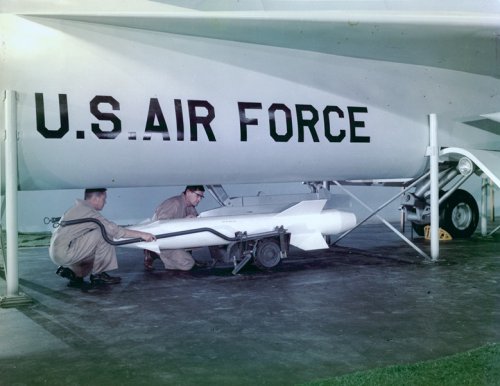 PaulMM (Overscan) said:
Thanks to an SPF member - scans.

The original photos are faded in the centre, I made a quick attempt to colour correct, will try again later with more effort.
Click to expand...

Excellent work Overscan! Hats off to that SPF member too!! RegardsPioneer

Rare footage of the Fokker/Republic Aviation D-24 Alliance mock-up from 1963.

Splendid! Shame it was mislabeled on the YouTube page, though. :-\

This seems to be stitched together from screencaps of the Republic TFX:

And lastly a Grumman TFX looking a bit old and dusty, but classic none the less. 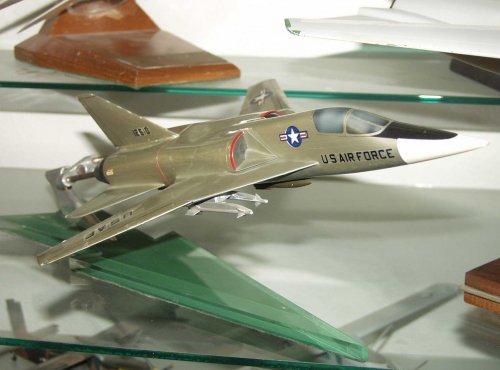 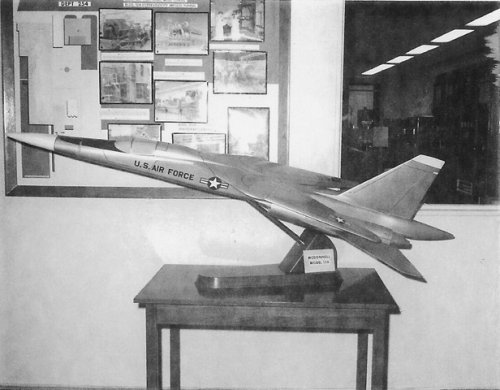 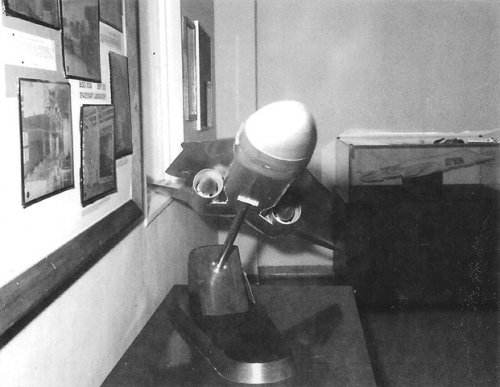 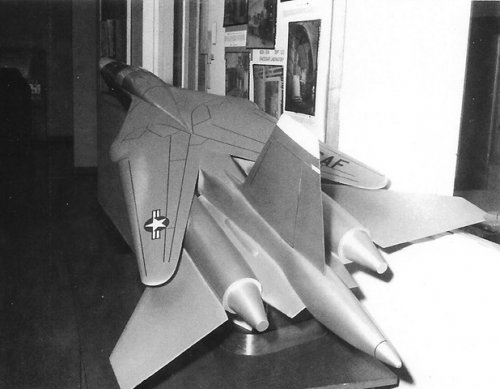 With these new photos you can see clear resemblance to well-known 1961 McDonnell NASA "TFX-1" model posted earlier in topic:


and even the later Model 199-VS100C "preliminary FX" design

Mere resemblance? To me it looks as if it's the same design. The overlapping wingtip and empennage are somewhat characteristic and very unusual.

Stumbled across this and found it very interesting re the Boeing vs General Dynamics TFX design selection:

The multibillion dollar TFX warplane contract was the most coveted prize the Pentagon ever dangled before bidders. Government spending, it was estimated, would exceed $6.5 billion – the largest contract for military planes in the nation’s history. The program was planned to include more than 1,700 planes for the Navy and Air Force. Such a contract could mean prosperity for an entire state, and the competition was intense.

Early in 1962, the rivalry for the TFX contract narrowed down to two major firms. The Boeing Company with headquarters in Seatle, Washington, proposed to build the plane at its plant in Wichita, Kansas. The General Dynamics Corporation’s Convair Division, in Fort Worth, Texas, cooperating with the Grumman Engineering Company of Bethpage, New York, planned to build the Air Force version in Texas and the Navy version in New York…Politically the Texas-New York combination backing General Dynamics and Grumman had a distinct advantage. Texas electoral votes (24) and New York electoral votes (45) went to Kennedy in 1960, while Washington’s nine electoral votes and the eight Kansas votes had gone to Republican candidate, Richard Nixon.

Late in the summer of 1962, persistent rumors of Texas political pressure on the TFX contract came to Senator Jackson. Calling Deputy Defense Secretary Roswell Gilpatrick, he told him he had heard General Dynamics was certain to receive the contract. Gilpatrick assured him there was nothing to it and that the decision would be made “strictly on the merits.”
…On November 24, 1962, the blow fell with the Pentagon’s announcement that the TFX contract would be awarded to General Dynamics…Scoop Jackson rejected the report that cost-conscious McNamara would take the second-best plane and pay more for it. He asked Sen. John L. McClellan, chairman of the Permanent Subcommittee on Investigations, to examine the TFX contract.

The McClellan subcommittee investigators questioned witnesses, examined documents and established: 1) The four service evaluation did favour to Boeing, 2) The Boeing price was $100 million lower on the first phase of the contract, and it might be $415 million lower on the total job, 3) The Pentagon Source Selection Board, composed of top generals and admirals, was unanimous in its finding that the Boeing plane would be cheaper and better, 4)The only document at the Pentagon that supported the General Dynamics plane was a five-page memorandum of justification, dated November 21, 1062. It was signed by McNamara; Eugene Zuckert, Secretary of the Air Force; and Fred Korth, Secretary of the Navy. (Gilpatrick also agreed with the award, but his signature was not necessary because McNamara had signed.)

This document was loaded with errors, according to the investigators from the McClellan subcommittee…It was appalling to learn that McNamara’s decision to award the contract to General Dynamics could result in wasting $100 million to $415 million on a second-best plane. Republicans derisively dubbed the plane the “LBJ” sine it appeared to have been peremptorily awarded to Texas….

General Curtis E. LeMay, the Air Force Chief of Staff, testified that he was not consulted prior to McNamara’s decision to overrule the Source Selection Board.
“I thought we had such a clear cut and unanimous opinion all up and down the line that I was completely surprised at the decision,” the Air Force Chief declared.
“Did any group, any authority at any level from you down to the evaluation group ever recommend the General Dynamics plane?” McClellan asked.
“No, sir,” LeMay answered. In all his experience he was unable to recall a single instance where the decision of the service selection board had been rejected by a civilian secretary….

In the Pentagon, Deputy Secretary of Defense Roswell Gilpatrick was given the job of implementing the new, tough code of ethics….Ironically, Deputy Defense Secretary Gilpatrick was the first high-ranking Administration official to come under sharp congressional criticism in connetion with the new code of ethics. The TFX warplane contract investigation raised questions of the “conflicts of interest” problem against Gilpatrick and also against Navy Secretary Fred Korth…

The difficulty of Gilpatrick’s personal role in the TFX affair certainly made it unlikely that he would be enforcing the new code of ethics on such others as Navy Secretary Fred Korth, who had a similar problem.

Korth, a Fort Worth attorney and bank president , became Navy Secretary in January, 1962. He succeeded John Connally, another Fort Worth lawyer who resigned to seek the Democratic gubernatorial nomination in Texas. Fred Korth was an enthusiastic booster of his home town and of the General Dynamics firm, which had the huge Convair plant in Fort Worth….and the General Dynamics Corporation was one of the best customers of Kroth’s Continental National Bank of Fort Worth.
Only three months before Koth became Navy secretary, he had given his personal approval to a $400,000 loan from the Continental National Bank to the General Dynamics Corportation….When it came time for Korth to make a decision on the TFX contract, the Navy Secretary overruled the recommendations of the top admirals and suggested the Defense Secretary aware the contact to General Dynamics….
Click to expand...

It may be that McNamara was following orders from Lyndon Johnson and/or rubber stamped recommendations from Gilpatrick and Korth when he awarded the TFX contract to General Dynamics but I doubt it. See The TFX Decision by Robert J. Art and my F-111B monograph. Basically, McNamara took the time to review the recommendation and supporting documentation himself. His conclusion was that the Boeing proposal contained design features that were risky and the estimates, overly optimistic. He also noted that the Boeing Air Force and Navy airplanes were less common (60%) than General Dynamics versions (84%), which is essentially why the services preferred Boeing: they each got an airplane more to their liking, although they didn't particularly like it. McNamara had insisted from the get-go on maximum commonality to minimize operating and support costs, which would more than offset development and procurement cost savings, even if they proved to be accurate. Naturally the service chiefs were outraged at being reversed by a civilian, Boeing disappointed at losing the contract, and the Republicans looking to embarrass Democrats. For a blow-by-blow summary of the hearings,see http://library.cqpress.com/cqalmanac/document.php?id=cqal63-1315404
P

Out of curiosity does anyone have any good photos of General Dynamics TFX / F-111 mock-ups??

Considering McNamara's vision of the F-111 doing everything, did he ever pitch it to the USAF as their primary air-superiority fighter as they started to think beyond the F-4E for the job? I know he tried to sell them it as an interceptor instead of the F-12 they wanted.
P

Just came across this article in Flight International 18 April 1963
Reference - McNamara on TFX – U.S Secretary of Defense defends himself

-LIGHT International, 18 April 1963 567 | ANY of the readers of this journal sometimes feel a trifle lost in the mighty ramifications of the aero space scene which we describe week by week, and h
www.flightglobal.com

Some interesting facts on the Boeing Model 818!

(My apologies if this has already been posted :-\)

From my dear Scott's site; 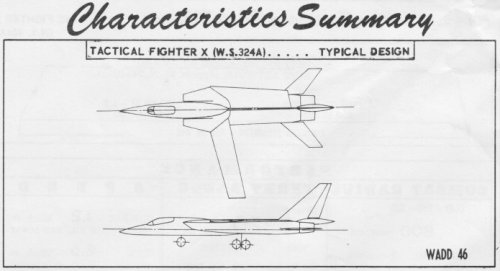 One of an extremely large large number of designs put forward for Weapons System 324A, Tactical Fighter X, which eventually became the F-111. This particular design, circa 1962, is the WADD 46 from the Wright Air Development Center and is pretty typical… a twin engine supersonic design with sizable variable-sweep wings.
Click to expand...