WLFSTD (While Looking For Something Totally Different) I found this art of a TFX concept. Wings seem folding over the fuselage, so I think it is based on some study from very early in the program, probably still in the SOR-183 phase. You can order a large reproduction here http://www.afapo.hq.af.mil/Presentation/Common/artcollection.cfm?MAIN_ID=2&CAT_ID=355&GROUP_ID=380&IMAGE_ID=5991

Excellent case study, in the same series as the B-2 study I posted before.

have some WT model photos as well

Elecronic Version of APR n.2 has an article describing a number of TFX-like configurtions tested in the Langley tunnels. Some are NASA's, some from contractors (unidentified). The list is not complete (e.g. it lacks the A3J-VG-like published here in a previous post) but includes a never seen before pivoting-wing one . BTW, note that the original NASA VG studies were done using a Navy requirement (Fleet Defense). By that time, the USAF requirement was for a VTOL supersonic long-range strike (kind of super_NMBR-3). Only later SOR-183 turned on STOL.

That's because it does not seem to be TFX-related. There were three or more VG models of the A3J tested, all, seemingly, aimed at producing a VG A3J for its own ends, not for TFX ends.

Just found this picture on my HD: As it is already designated F-111 and GD already had
won the competition, it could be based on one of the earlier designs, posted by Matej
last year, I think.
(from Flugwelt 1/1963)

It is a report (better a series of report from NASA. The design and different variations (inboard and outboard wing pivot, for example) was studied by Langley and NAA in 1959 answering a request by the Navy for a supersonic Combat Air Patrol aircraft with long loiter time at great range from the carrier group. Actually it was a supersonic version of the Missileer concept, prompted by VG research early results. See my next post for details. See here for an earlier different (and wrong) interpetation http://www.secretprojects.co.uk/forum/index.php/topic,526.msg11116.html#msg11116

Uh, the wrong interpretation was by myself, Scott got it right.

It was the last Langley proposal for the QOR-183 (Qualitative pre-GOR document) for a low-level supersonic dash (for 600 Kms !) tactical aircraft. See my new post for details.

I could have posted the single findings in the already exstant relevant topics, but I think this deserves a thread on its own. Two recently made available online NASA documents (although cleared for distribution since a LOOOONG time, but no-one seemed notice, except Scott, in part) http://ntrs.nasa.gov/search.jsp?R=645380&id=5&qs=Ntt%3Dvareiable%252Bsweep%252Bfighter%252Bairplanes%26Ntk%3Dall%26Ntx%3 Dmode%2520matchall%26N%3D0%26Ns%3DPublicationYear%257c0
and http://ntrs.nasa.gov/search.jsp?R=850457&id=6&qs=Ntt%3Dresearch%252Brelated%252Bto%252Bvariable%252Bsweep%26Ntk%3Dall%26Ntx%3Dmode%2520matchall%26N%3D0%26Ns%3DPublicationYear%257c0

provide much needed context information on the early stages of variable-sweep research and application. I'll start here with some probable GOR-183 (and early concepts later re-utilized for TFX). The first reference says that the following designs were provided by the US Air Force (the first) and by three companies for testing in Langley in the 1960 time frame. All dimensions are in inches except for the USAF concept, where they are in feet. The second and third are obviously variations of what later became the Republic's TFX submission (82 and 83.5 refer to he leading edge angle of the fixed delta wing on which the swinging sections folded). You'll notice that all configuration are tandem seated, except the last one which is side-by-side (an hallmark of full TFX, I think). I tried to identify the two Unknown companies but to no avail. The UnknownB-1 has some similitudes with the already published early GD TFX submission model, but not so decisive in my opinion. Hope you'll enjoy.
And keep in mind that during the GOR-183 phase, the competing companies were on their own (no coupling). so they could well be Grumman's or Douglas'...

Last design, already full TFX I think, but perhaps not "coupling time" yet...

I recently came across these wind tunnel models. I fairly confident that the two models in the background are fairly late GD TFX. The two in front, I *think* might be McAir, based on the forebody shaping. Note that the boxy aft fuselage shape is not representative of the design - it's for the wind tunnel sting mount. Sorry for the photo quality - it was almost pitch dark (without the flash). 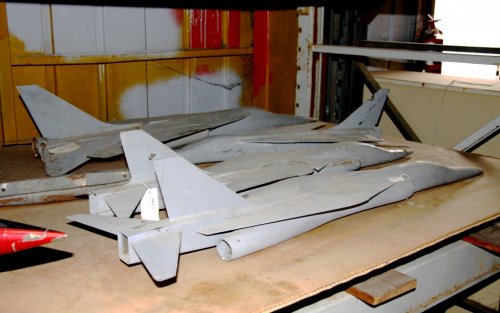 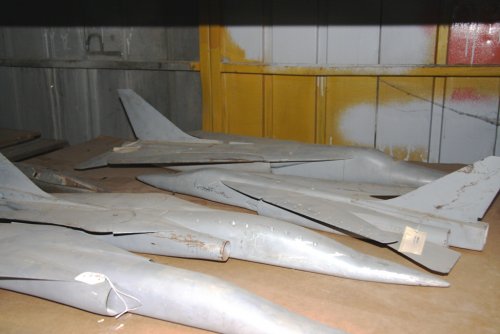 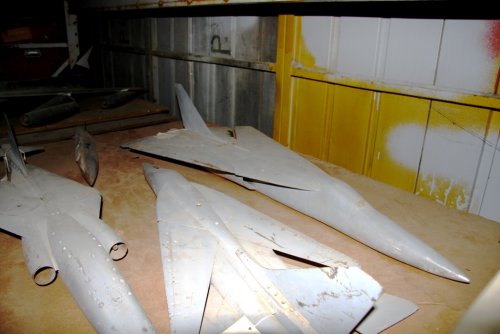 Interesting. But why are the Republic designs labelled "Vought"?

Because it was late at night..
Click to expand...

Sundog said:
The version of the F-111 that looks very "Fencer" like is the pre-production version of the F-111B. That shouldn't be confused with the prototype F-111B. Of ocurse, I guess I should say, the Fencer looks very much like the pre-production F-111B, since one preceded the other. The place I have ever seen photo's is in the F-111 Naval Fighters series. In fact, I never knew so many pre-production F-111B's had flown until I bought that book. I had only known about the short nosed prototype until then.
Click to expand...

There were a total of seven F-111Bs built. I have personally seen three of them, and they all looked pretty much the same except that not all of them had an IRST pod under the nose. All the noses I saw were "short", in the sense that the other versions had a "long" nose. The reasons for the different length of the Navy version was first, footprint on the carrier and second, to provide the necessary visibility over the nose on carrier. The F-111B did prove that pigs could fly, just not very well.

This purely hypothetical study illustrates features which might be expected in the eventual TFX aeroplane. The wings are depicted in the folded, intermediate and spread positions. Virtually every m
www.flightglobal.com

in the text I read "purely hypothetical study"...

The four strut landing gear is interesting, if not a weight penalty. The conceptual artist must have been a fan of the B-52's landing gear.

It's a cool looking design, though.
K

Does anybody have any data on the Republic design, dimensions, weights, capabilities, etc?

Were they going for a higher-speed than the other TFX-designs? What engine was the Republic design to use?

Another result of my trip. A not-uncommonly reproduced photo of a display of GD wind tunnel and display models... but this time with sufficient resolution to actually see the things.

End 1959, Langley researchers stressed the importance of the development of a new turbofan engine to match the new aircraft versatility offered by the variable sweep wing.
P&W, counting on Navy support in the multi-service competition, was proposing the TF30, an engine developed under a $30 million USN program.
Allison had reached a technical agreement with R-R and was proposing a version of the R-R Spey engine.
After originally submitting the J79 and not having it selected by any of the competing airframe companies. GE promptly came up with an entirely new design: the MF295, a dual rotor, front fan powerplant. The MF295 was several hundred pounds lighter than the Allson or P&W engine, and was smaller both in length and in diameter. This promised relief from the crushing limitation on weight, and also permitted the narrow fuselage so critical to the USAF requirements.
Boeing, which had been designing the TFX around the heavier P&W for two and an half years deided to switch the the MF295.
Other contractors apparently shared Boeing's views for North American, MCDonnell, Douglas, Lockheed, and indeed every one except Republic, Chance Vought and GD/Grumman, switched to the MF295. Five airframe companies had speified the MF295 as their engine of choice.
The TFX competition narrowed to two:
Boeing design/ GE MF295
GD/Grumman design/P&W TF30
C

John Stack, who had been the chief NASA sponsor of he renewed variable'sweep research program, approached General F.K.Everest, TAC Commander, with the proposition that the crucial aspects of the partially formed requirement could be satisfied by a carefully deigned aircraft emodying the fruits of NASA's recent discoveries.
Concurrently, NASA informed the Navy of its latest findings and that service issued study contracts to two major aircraft firms, North American and Douglas.
Independently advised of the apparent breakthrough, the Boeing company began to study possible applications of the variable sweep techniques and late in 1959 submitted to General Everest an informal proposal for the development of a variable sweep aircraft generally conforming to his conception of a post 1965 TAC fighter.
Boeing airplane configuration with a 65° delta wing having auxiliary variable sweep wing panels.
With two J79 engines, general dimensions would be:
Span (swept): 33ft9in
Span (unswept):56ft3in
Fuselage length: 60ft9in
Total length: 63ft9in

Two versions of the Republic TFX. Neither quite matches the mockup.

Last week while spending time in the Vought Archives, I came across a number of black & white and color photos of the Republic-Vought TFX proposal model. Here's the color photos to add to what Scott's posted.

Note the model has a "windowed" section of the fuselage bottom to show the internal carriage of the missiles. 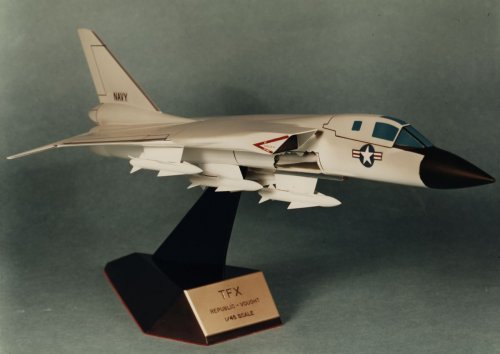 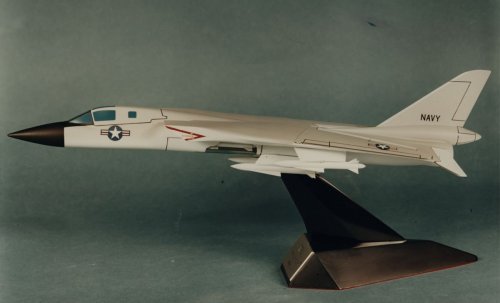 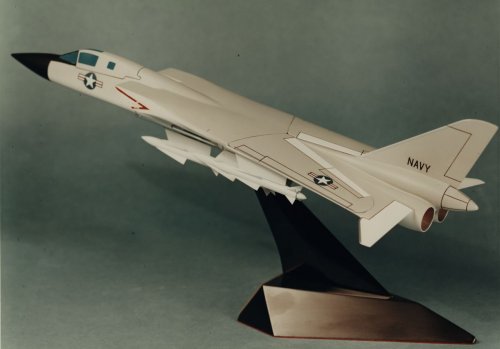 THAT'S A SMASH, Mark ! We need a smiley waving flags and firing fireworks. Gentlemen, this is the FIRST document EVER PUBLISHED on the Navy version of the Republic TFX submission ! BTW, it is dated before the side-by-side arrangement became mandatory.