A US Navy programme, at present in the Concept Formulation stage, is aimed at developing a Light Airborne Multi-Purpose System (LAMPS), to utilise helicopters for a variety of missions while operating from, and extending the capabilities of, destroyers and escort vessels. The main tasks of such helicopters would be anti-submarine warfare (ASW) and cruise missile defence (CMD) but they could be deployed also for general utility operations.
Sealite has been proposed by Kaman to meet the Navy's LAMPS requirement and is intended for deployment on naval destroyers and escort vessels at present in service, which have helicopter deck loading limits of about 6,000 lb (2,720 kg). To overcome this weight limitation Kaman intend to utilise the dynamic system of the basic UH-2 helicopter, relying upon a small, lighter fuselage, new skid landing gear, two Pratt & Whitney (UACL) PT6(T400-CP-400) turboshaft engines and a three-blade folding rotor with a new rotor hub to keep the maximum gross weight down to 7,900 lb (3,583 kg).
For ASW missions, Sealite would carry one Mk 46 torpedo, MAD equipment, eight sono-buoys, data link, radar, avionics, data processing, missile defence provision and a crew of two. For CMD operation, equipment would be changed to one Sparrow missile, illuminator, electronic countermeasures, data link, radar, avionics, ASW provisions, sensors and a crew of two.
Click to expand...

Seasprite did carry-trials with a Sparrow for definite, and I think they also conducted radar lock-on trials. But no launches or even unpowered releases to the best of my knowledge.

Here's a photo of the Seasprite trial fit of the Sparrow: 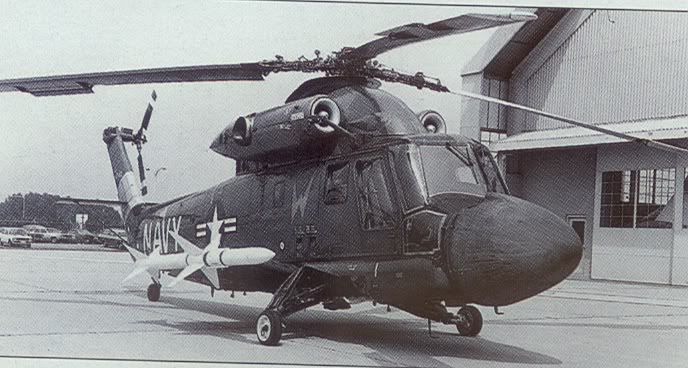 Gregg, could you consider attaching images through the forum rather than photobucket? External links sometimes die..

Jackpot Triton!!!!
Great find this pic! Can I ask were you found it?

Pioneer said:
Jackpot Triton!!!!
Great find this pic! Can I ask were you found it?

Searching Google Books in the issue of Popular Science cited above.

So this was intended to fit in a DASH hanger?
Wow.

ASMD....is that anti-surface missle defense?
Were they intending to shoot down a TERMIT/STYX with the Seasparow?
S

Here's the set of three photographs of the full-size mock-up in higher resolution/definition, taken from Air Progress:

Hi all,
Wikipedia (I know, I know) mentions the Sealite was to feature "new skid landing gear". Are there any drawings, concepts etc showing the skids?

I searched for you about this drawing,but I couldn't find it,maybe tomorrow
I can make anther search.

Thank you, hesham. A "Sealite" would be an interesting scale model project.

unfortunately nothing in my files,even JAWA books,also I searched in many books about
helicopters,no way.
P

I looks as if the Kaman designation for its Sealite was K-820.

OK, I just stumbled across this picture and exciting info at another website


OK, got very excited, and done some enquiries, and sadly this was posted:

"Well, sadly, it doesn't exist any more. The Museum had been hit by a tornado in 1979 and they were able to build a new building, which is where I took this photo. In the late 80's, there was a sever need more indoor display space. Even though it was not a real aircraft, and made of wood, the decision was made to place it outside with tarps over it. Within two years the wood had delaminated and it was going down hill rapidly. It was given to the Airport Fire Department and burned as an exercise. There were some actual aircraft parts, hard points, racks etc, that were removed as they had other uses."