I'm trying to find information and pictures on the German "R" planes, in particular the Junkers R eindecker. I only have one picture. I hope this isn't too big. If anyone has more, I'd be grateful. My thanks in advance.

To be brutally frank, fockewulf261, you really do need to get hold of 'The German Giants: The German R-Planes 1914-1918' by G W Haddow and Peter M Grosz. It is the definitive book on the subject, and carries hundreds of photographs (including, for example, a photo of the wind tunnel model of the Junkers R.I) and hundreds of scale drawings (including a three way of the alernative Junkers R.I layout, with twin tail and radically different fuselage), so not only is it a superb bit of historical research, it is great for modelmakers too!

Although a first edition can be obtained for £25 ($50), excluding shipping, I recommend you get the second revised edition (1969), as it has an extra 30 or so pages. This will set you back around £40 ($80), but is well worth it. There was also a third edition (1988), which is the one I have, but I don't know if it had any further revisions. Alternatively, order it through interlibrary loan.

Anyway, attached are the windtunnel model and Version 2 (the long thin nose carries a machine-gun position at its tip) which I believe to be small enough under fair-use condtions.

This is said to be the first aircraft to be designed it the wind tunnel.

The first four images shown in hesham's post depict the Junkers R bomber. The last image shows the Junkers R flying boat project, but that was a four-engined aircraft as opposed to the twin-engined bomber. R-projects were produced by various German companies of the time, the 'R' standing for 'Riesen' which is German for giant.

I suggest a change of title for this topic.

Posted originally by Hesham, here's the flying boat with a thread on it's own:

I am currently reading an East German book (source details below) which gives details of three Junkers R series aeroplanes from 1918. The information differs from the earlier posts and the Hugo Junkers website http://hugojunkers.pytalhost.com/ju_ri_a1.htm .

I detail the information below for consideration, extracted from the book. It could be that the R.II is the R.II 58/18 mentioned elsewhere, evolved from the 1915 R.I twin engine bomber.

The Junkers R. series was a multi-engine bomber exercise covering three different types of configuration. All design work was undertaken in 1918. None were completed.

The thickness of the wings of this versions was about 1.6 m, allowing maintenance by crew during flight. The wings also contained two main fuel tanks with a 1,000 litre total capacity.The tail rudder was operated by a power boosting auxiliary engine, meaning the pilot needed no extra force to control the rudder.

Trial construction on a small number of the parts was underway when the project ceased in 1918, even befor the war had ended.

This project was mentioned in the Patent Spec 31 36 92 dated 23 April 1918 and was described as a monoplane with internal construction wings. Main difference compared to the R.I was double fins and bigger ailerons.

These R.2 details were estimates from contemporary literature but the aeroplane was believed to offer better performance than conventional biplanes.

This design was started in June 1918 and was a large sesquiplane flying boat. The engines were never built. The machines hull was between 10 and 12 metres wide. The wing centre section was around 45 metres long and 2.4 metres thick and 12 metres broad. Like the R.I, it allowed engineers access to the engines in flight.

I never saw your respond my dear Cy-27,great info,many thanks.

Dear experts, I'm not one, but that airfoil does looks very modern for 1918...
And does anybody have a link that describes the evolution of airfoils during WW1?

It looks quite similar to a Willy Messerschmitt airfoil of, I believe 1917, just before he went to war.

Not too advanced for the time I think.

Gildasd said:
Dear experts, I'm not one, but that airfoil does looks very modern for 1918...
And does anybody have a link that describes the evolution of airfoils during WW1?
Click to expand...


the article speaks about Junkers aircraft and projects of 1918.

Just to prevent misunderstandings, as the pictured article is a bit difficult to read:
The shown aircraft in Swedish markings is a Junkers K 37, which is described as
"a modernised version of the proposal, whic was made 10 years ago". So, no direct
connection to the design from 1917, I think.
T

The article states clearly that the Swedish aircraft is indeed a K37. But the article itself speaks of a K37 "precusor" project of 1918.


and for my dear Jemiba,please see the reply # 3.

Thanks for the article, I'll give it a thorough read after exam season

Gildasd said:
Thanks for the article, I'll give it a thorough read after exam season
Click to expand...


here is the page two.

Are you trying to make me fail my exams?

Johnbr said:
This is said to be the first aircraft to be designed it the wind tunnel.
Click to expand...

Nah that was the Flugan in sweden, and other wind tunnels were built before ww1
A

Matthew Sellers, a USA pioneer, built a wind tunnel and used it for testing prior to constructing his first aircraft in 1908. I am certain there were other contemporary wind tunnels, but the interesting part of this story is that his workshop survived almost untouched for 50 years until identified during the 1960s, complete with much of the original test instrumentation. I believe the shop was moved to the aviation museum in Hartford, Connecticut.
Additionally, one of the Holy Grails of aviation technical historians is the disposition of contents from the Junkers technical library. There is some thought that it came to the USA following WW II. At least one archivist believes it might be buried in the great collections of the US Library of Congress.

Larger image.
Junkers put work underway on their R I in January 1917, the design being finalised in March of that year. What Junkers were proposing was a fully cantilevered monoplane with a 5-man crew and powered by four unspecified engines housed transversely within the thick wing's inboard sections. These paired engines supplied power through a combining gearbox to drive the bomber's two propellers. Performance estimates for the R I included a top level speed of 112mph, an operational ceiling of 17,060 feet and a maximum bomb load of 3,305lbs. Where the R I really came into its own was over its ability to carry a 2,200lb load of bombs over a radius of action of 380 miles. With wind tunnel testing complete and work underway on R 57/17, the first of the two machines ordered, the R I would have given the Allies pause for thought had it gone into service, particularly as even the first generation of lumbering biplane R-planes had proved exceptionally difficult to combat in operational service. 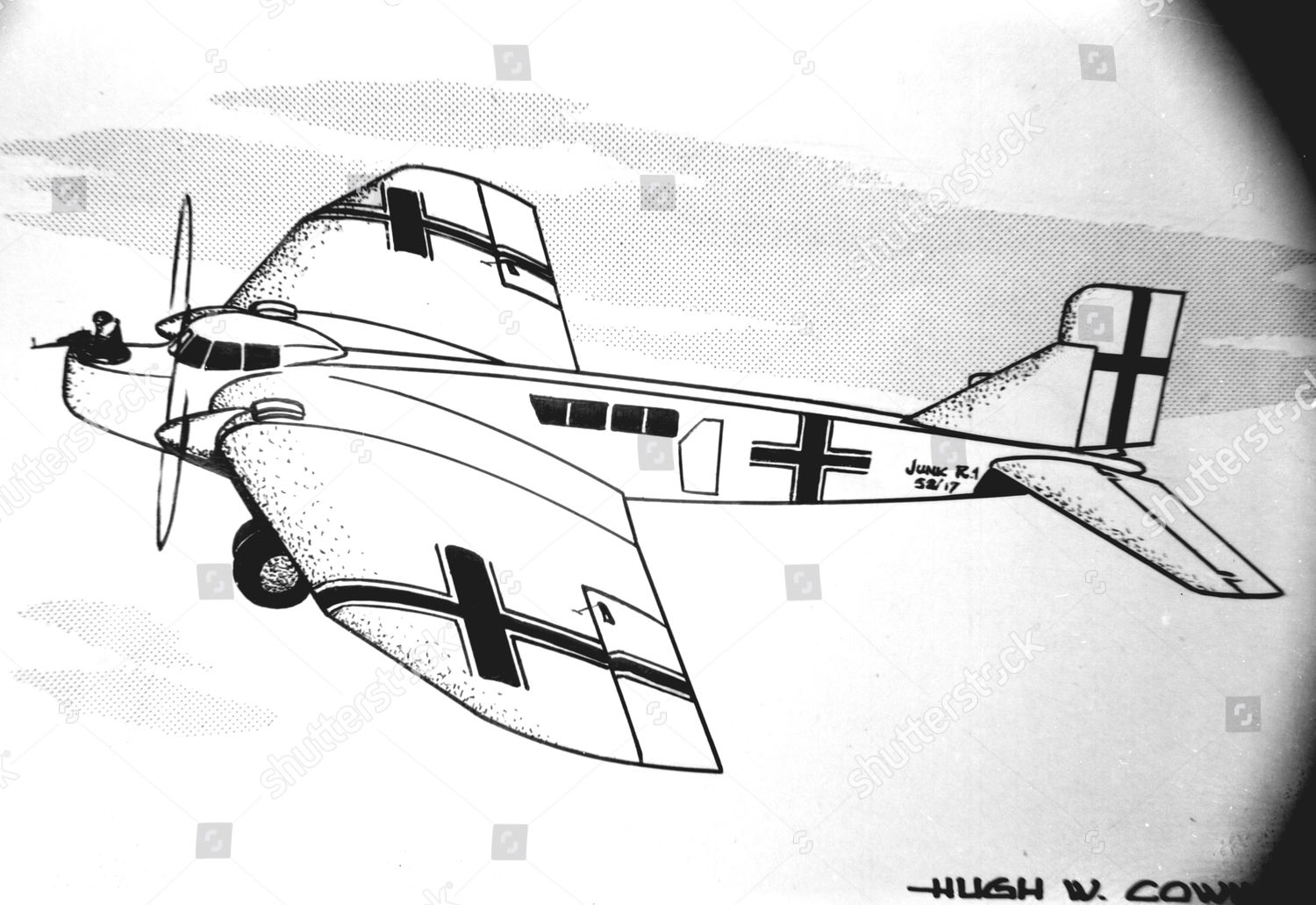 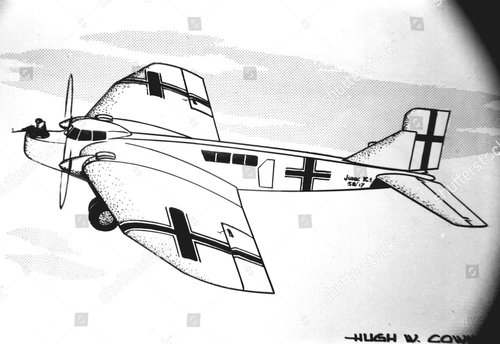 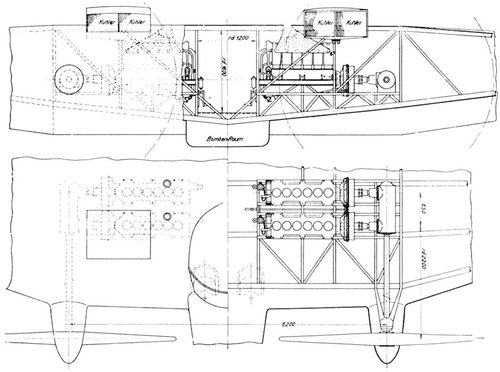