Ikarus S 49 was the first Yugoslav aircraft built after the ww2, on the legacy of it's predecessor, Rogozharski IK-3. Two out of three designers worked on the IK-3, and these aircraft shared around 75% of all parts. The main difference was the engine, soviet VK-105 PF from Yak 3.
After the war, JRV had Spitfires, Hurricanes, Migs, Yaks and Me-109s. The problem was, after the Tito-Stalin split, Yugoslavia could no longer purchase aircraft from Soviet Union, but had a lot of spare engines for Yak fighters. Because the designers had all the technical data and personal experience from previous fighter, the first S 49 flew in June 1949, just eleven months after the start of the project.
A total of 45 planes were built, but not parallel y but in succession. Inputs about deficiencies from test pilots were corrected in subsequent planes. Interestingly, landing gears came from Italy (probably as war reparations, similarly like Me-109's came from Bulgaria).
The letter A meant it was the first production series (45 planes). The second series (S 49S), had French Hispano-suiza HS 12z engine. Around 200 were built.
There were projects for S 49B (with Daimler Benz DB 605), S 49D (with unguided rockets) and S 49E (with tip tanks).
Aircraft number 18 survived until today and is pending restoration at Belgrade's Museum of Aviation as part of old planes squadron (the project was started on the 100th birthday of aviation in Serbia).

Wow! Very interesting. Ikarus had a lot of interesting designs and I hope you post them here soon.
J

As an aside, what caused the Tito-Stalin split?

Here is the S-49B project with a DB-605. (Credit to EpicBlitzkrieg87 on the War Thunder forums for posting the image): 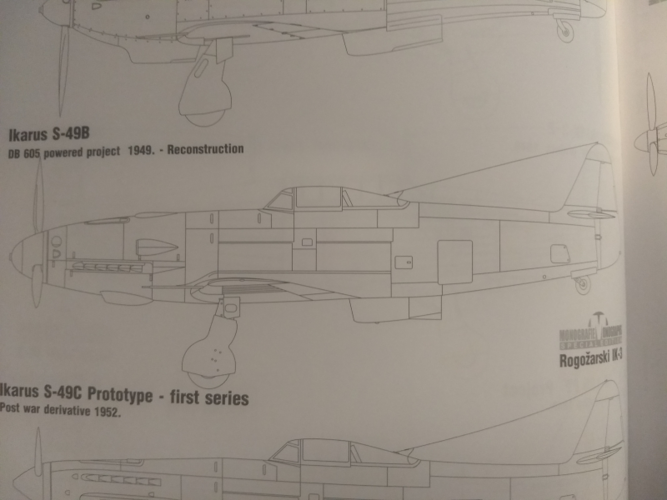