Heinkel He 162 projects and variants

Jemiba said:
That's what I wanted to express. Back then, people, who made fakes often were
ordered to do so by higher authorities, but the results in most cases are easier to tell,
then today, I think.
Click to expand...

As I expressed, I have some doubts about this single-seat glider, too ! Would have been an easy
conversion, of course, but what for ? At least as an actually built variant, I only know the one,
you've posted.
As a variant with a Jumo 004 engine, I've found the A8, not the A9, but it seems to be actually
planned.
Click to expand...

Assuming for a moment that the photo was retouched to illustrate a genuine proposal for the Luftwaffe, perhaps it was intended for the so-called 'Leonidas Squadron'?

Grey Havoc said:
Assuming for a moment that the photo was retouched to illustrate a genuine proposal for the Luftwaffe, perhaps it was intended for the so-called 'Leonidas Squadron'?
Click to expand...

Although designed for easy and fast construction, I think for a one-way mission, the He 162 still was too expensive, especially,
as there were other types, designed from the start for that purpose. And as far as I know, all "Selbstopfer" (self-sacrifice) types
were powered types, that could be released well before the target.

Thanks Justo for those Heinkel types, I think, we should strat a new thread for those, not related to the "Volksjäger" program.

Excellent my dear Justo,thank you very much.
S

A slightly better resolution of the He 162 versions chart (albeit in Russian), and detailed plans of variants 1, 2 and 13 (all from the Russian magazine Polygon).

A few profiles of the above.
P

In Volker Koos book "Heinkel Raketen- und Strahlflugzeuge" I've found a drawing of the He 162 twin
seater, showing the "emergency exit" for the instructor. Another drawing shows the seating arrangement
of the He 162S.

Thanks to all. Amazimg!

Triggered by the thread about Gerys He 162 pictures ( http://www.secretprojects.co.uk/forum/index.php/topic,19310.msg187102.html#new )
I had a look into the Luftfahrt International articles about the He 162 (issue 24 and 25).
In a drawing of the P.1073 (drawing number 1073 01-18) quite clearly an armoured windscreen
is shown. Weight for armour for this variant was (estimated) 77 kg. For the He 162 (as built) it was 70 kg.
The lack of an armoured windscreen actually amazes me. as this protecting measure was even provided
for the Bachem Natter, which, due to its kind of armament may have stayed at longer distance to its target.
So, my question is: Was an armoured windscreen planned for later marks of the He 162 ? If not, why ?
Ease of production ? Not very likely, I think, as it was used even on more primitive designs. Maybe the
He 162 was planned to be used mainly against fighters ? Not very likely, too, as it was envisaged to be
flown by hastily trained pilots. And pilots, even if only poorly trained were in short supply and not redundant.

Jemiba said:
A good photo and even a coloured one, but what does it have to do with the He 162
canopy ?
Click to expand...

Both canopies still are different ! Not sure, that the He 100 had an armoured windscreen, or just
an optical flat panel, but the He 162 had neither. A rounded windscreen was tried on other aircraft
and in most cases proved to be problematical, because of optical distortions, often preventing precise
gun laying via the gun sight. The He 280, maybe more comparable to the He 162 had such a flat panel,
too.
The most plausible explanation for me is the urge, the program was driven with. About 180 to 185 He 162
were actually finished, many of them still suffereing from leaking tanks and other flaws, nevertheless, they
were given to squadrons. Changing a part would have meant a delay in the production, so maybe, no changes
at all were incorporated. But that's just a guess, haven't still yet found a real evidence.

While searching for some clues, I've just found in Volker Koos book "Heinkel - Raketen- und Strahlflugzeuge"
(Rocket and jet aircraft) a listing from a soviet report about the development of the He 162, showing the
variants of the P.1073 1 to 20. The complete page from this report is shown as a picture of about 8cm x
20cm, so the single drawings are less than stamp sized, but maybe the basic layout is recognisable nevertheless.


and also from the same source;


a book about He.280,here is a drawing to He.162,but with different cockpit
configuration.

The original posts in this thread mention the two seat variant of the He 162.

There is an article by Peter Petrick in a 1994 issue of Jet & Prop about the He 162 (He 162S) Schulflugzeug variant which had couple of interesting images of the training documents (in German) and original an factory drawing which are attached below.

From Flugzeug Profile No.35

hesham said:
From Flugzeug Profile No.35
Click to expand...

Jemiba said:
Here are drawings of the E (from FlugRevue 1978) and the C and D (from
Flugzeug 5/1995). It should be noted, that at least at the time those articles
were written, it wasn't clear, if construction of the C/D/E-variants was ever
started. Even vectorsite just mentiones, that "interchangeable wings" were dis-
covered, not actual prototypes. In the drawings the "C" and "D" are just described
a windtunnel studies and for those interchangeable wings would make sense.
Click to expand...

He 162E — He 162A fitted with the BMW 003R mixed power plant, a BMW 003A turbojet with an integrated BMW 718
liquid-fuel rocket engine,mounted just above the exhaust orifice of the turbojet — for boost power. At least one prototype
was built and flight-tested for a short time. 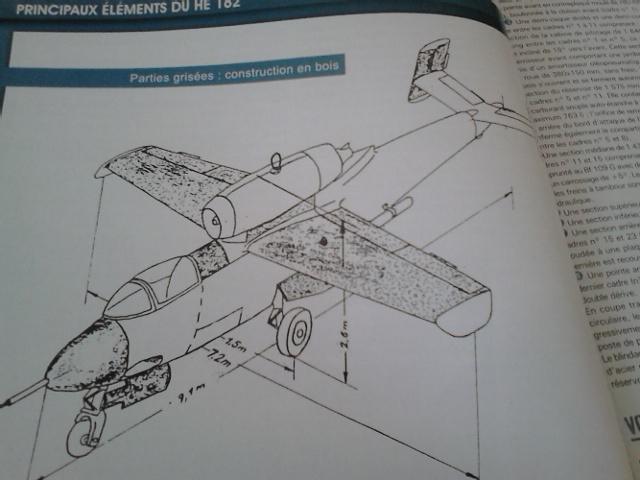 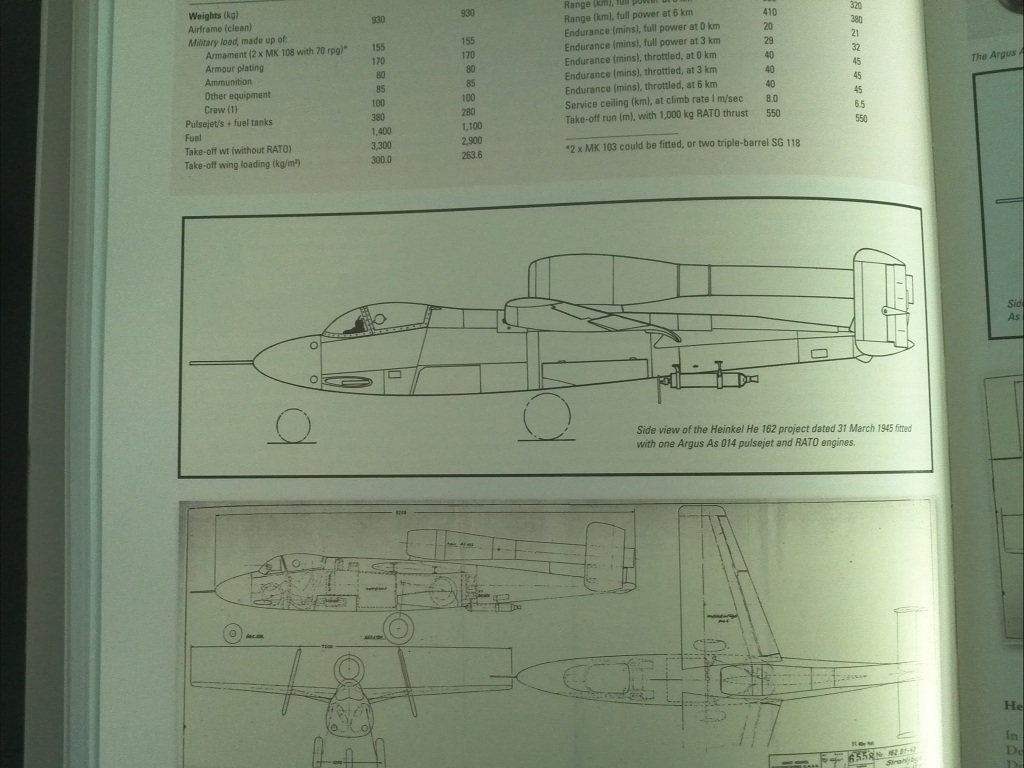 Question on He 162 version with Argus pulse engine

How they start, Katapult, Solid rocket motor or drop from Aircraft ?

How they start, Katapult, Solid rocket motor or drop from Aircraft ?
Click to expand...

According to a Heinkel report dated March 30, 1945, 'He 162 with Argus tube': "Take-off must be effected by having recourse to auxiliary starting aid. If the take-off position is not to be betrayed by the smoke of the starting rockets it will be necessary to employ a catapulting device."
S

somebody who have that report?
S

any drawing or picture regarding the heinkel 162 M8 with a V-Tail?
S

sgeorges4 said:
any drawing or picture regarding the heinkel 162 M8 with a V-Tail?
Click to expand...

My dear Sgeorges,I will search in my files.
S

any original document regarding the heinkel 162 with R4M?
S 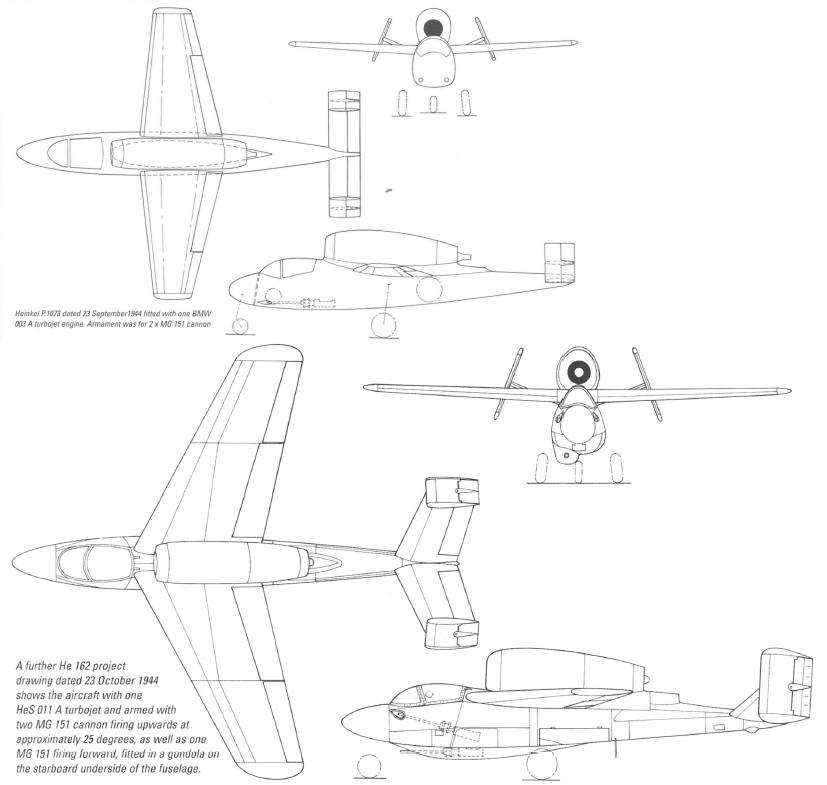 source: heinkel he 162 Spätz: from Drawing board to destruction: The Volksjäger Robert forsyth and Eddie J.creek
S 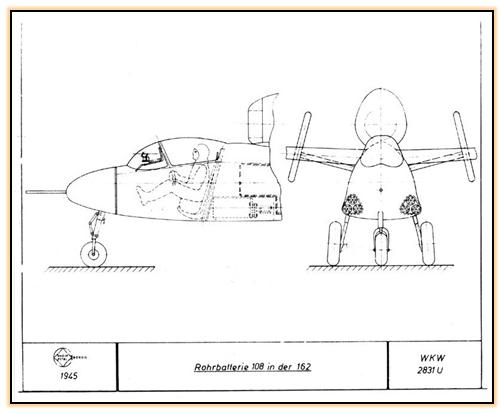