unfortunately we don't know more about this company,except a small Info from Flightglobal,an older or newer Project
for it is a mystery ?.

Ah, another Hesham 'mystery' that is not a mystery . Most of the answers can be found on Wikipedia.
During the war the majority of flying boats in Royal Navy service were developed at Felixstowe naval station by Lt John Porte, based on, and extrapolated from the Curtiss America twin-engine flying boat. As Felixstowe only had limited production facilities most were built under licence by a large number of boat yards and aircraft companies. One yard undertaking this work was Camper and Nicholson and they amalgamated with White, Allom and Company, another boat builder, to form Gosport Aircraft Company early in the war. In 1919 they acquired the services of Lt John Porte as chief designer and the designs you have posted are his work, several straight developments of his work at Felixstowe. Unfortunately he died the same year and the company was dissolved shortly after.

For more on the Felixstowe 'boats, see

Thank you for solving this mystery (for me).

the Company also planned to G.9,it was a post-war civil flying boat,designed by Porte
on basis of Fury,but abandoned in 1921.

hesham said:
the Company also planned to G.9,it was a post-war civil flying boat,designed by Porte
on basis of Fury,but abandoned in 1921.
Click to expand...

G9 advertisement - note that it could be either a three-engine or four-engine aircraft. 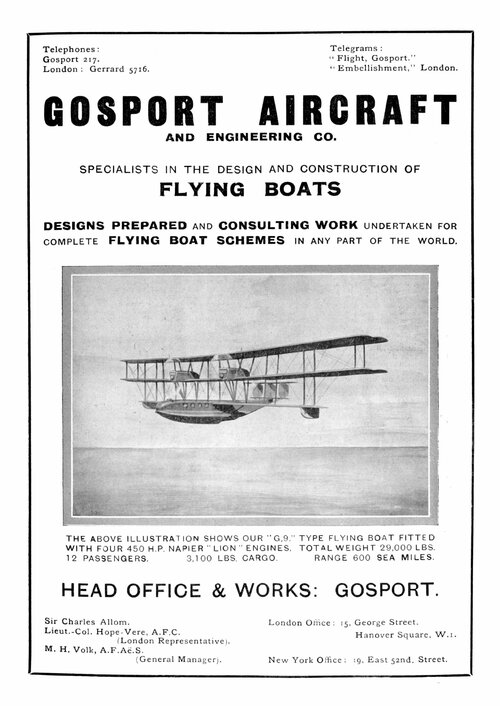 Incidentally, one of the flying boats proposed by Gosport Aircraft in 1919 was a ten-seat machine designed to carry men and equipment to the site of a forest fire, in Canada for example, or some other disaster site. Quite possibly the very first aircraft of this type put forward, the Gosport Fire Fighter is arguably the un-built ancestor of today's water bombers.

Returning to the advertisement posted by Schneiderman on 1 January, does anyone know whether M.H.Volk, listed as the General Manager of Gosport Aircraft & Engineering, was Magnus Herman Volk, the eldest son of Magnus Volk of Brighton and electric railway fame? I know that Volk's second son, George Herbert Volk, was associated with seaplane construction and operation at Brighton (apparently he worked with Porte) but I wasn't aware that (if it be the case) his elder brother also had interests in seaplanes. Online sources suggest that it is the same man but I've failed to find evidence to corroborate this.

I had a quick search on Ancestry for which census data is available up to 1911 (hopefully 1921 will be added this year). The only M.H.Volks that appears in the listings is Magnus Herman, son of Magnus, brother of George, so there is no chance of confusion and hence it is almost certain that he was the GM at Gosport. In 1911 both sons were still living in Brighton, separate addresses, and Magnus H is an electrical engineer like his father. George is an architect. I wonder if the references in Flight etc. to Volk's shed at Brighton, used for seaplanes, was a joint venture and both sons were involved.
Share:
Facebook Twitter Reddit Pinterest Tumblr WhatsApp Email Share Link