"In early 1938 ... the Westland Company, which had produced the Westland-Hill Pterodactyl, collaborated with a Mr. W.P.H. Goodsir in the design of a cranked swept-wing tailless design of front-engined propeller powerplant configuration. Known as the Goodsir Tractor Pterodactyl, the design had a 47° wing-sweep outboard of an unswept inboard wing section and a trailing edge sweepback of 27°. A 4½° wing twist, or washout, was employed at the wingtips, which featured small vertical surfaces of elliptical form. Flight tests of the model achieved 49 seconds duration and the design showed excellent stability and a flat glide angle. Although only built as a model, the excellence of the design can only have persuaded Westland to assist the designer..."

Does anybody know any more about this project?

I doubt that Westland involvement amounted to much, just advice on wing area it would seem. Petter was quick to drop Hill when he had the chance in the mid-30s, so no great fan of tailless, apparently.
The quote from Cole implies that the intent was a full-size aircraft tested by a model, but the article in Flight puts it firmly in the modelling enthusiast category. 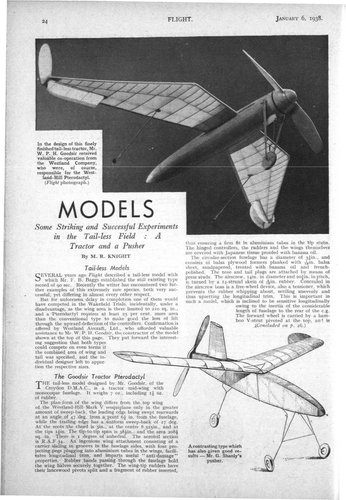 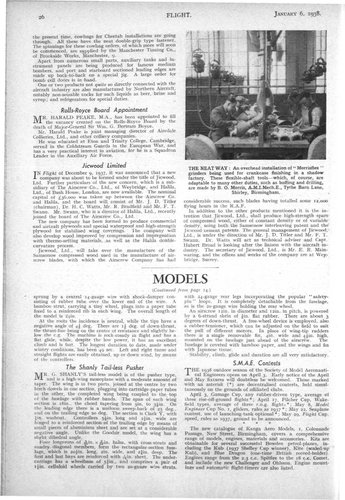 Short answer is no. But perhaps a very tenuous link ( see image )

Interestingly the Westland Pterodactyl V had a straight inboard section with 47 degree sweep-back on the outer panels.

Thank you both, mystery solved. Yes, a close copy of the Mk V's upper wing, although the endplate fins are mounted a little higher to reflect the lower wing position.

The link must be more than just tenuous; the Frog kit appears identical to the Goodsir prototype in every detail.
Goodsir must have either worked for Frog or sold his design to them.

As for Petter, he was indeed the murderer of the Pterodactyl programme. When he took over as Chief Designer he killed off all his predecessors' projects to make room for his own ideas. When he received the highly promising RAF flight test results of the Pterodactyl V, he wrote a letter to the Air Ministry damning it with faint praise, as the saying goes, so that they saw no point in pursuing it alongside more conventional designs. Ten years later, the Tailless Aircraft Advisory Committee was bemoaning Germany's ten-year lead in tailless aircraft technology. Had Petter had a little more insight and a little less self-interest, we could well have had a Pterodactyl monoplane fighter in place of the Defiant and its ilk.
Last edited: Jul 29, 2020

I thought I'd have a quick look to see if I could find a link between Goodsir and Model Aircraft Ltd (Frog). Early Frog models were based loosely on actual aircraft, as you can see from this early catalogue. Their factory was in Merton, no great distance from Croydon where Goodsir was a member of the Croydon and District Model Aircraft Club (DMAC). Then I found this in the 3rd Feb edition of Flight.

"Following the publication of a photograph in last month's Models page of Flight, together with a, description, considerable interest has been expressed in the beautiful tail-less mid-wing monoplane with monocoque fuselage, designed by Mr. W. P. H. Goodsir. I hear that International Model Aircraft, Ltd., of Merton, London, have decided to market a kit of materials for the construction of this model. Mr. Goodsir is now designing a petrol-engined model of the Westland-Hill Mark V. Pterodactyl sesquiplane."

There are no further references to him.

So Cole's comments are indeed misleading, the Goodsir design was just a flying model based on Westland-Hill layout nothing more. 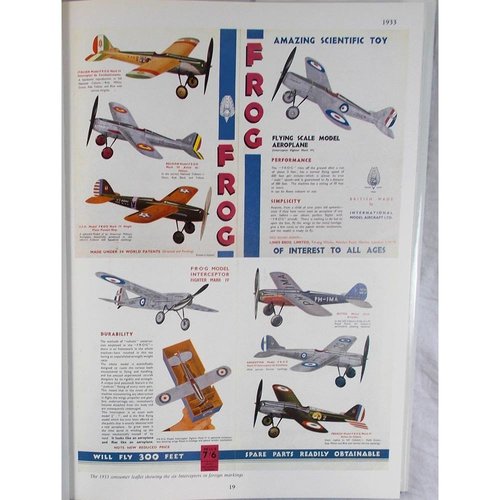