I'm trying to find out information on the Matra JK200 rocket/fuel/bomb system that was associated with the Dassault Mirage III/5/50 series of fighter-bombers.

As far as I can ascertain Matra promoted three combinations of the system:

Although I have been able to find information/photos of both the Matra JL100 and TK500 systems, Im struggling to find any information/pictures of the Matra JK200 system!

Can anyone afford me the time to ascertain whether the Matra JK200 system was actually manufactured and purchased by what air forces?

Was it only able to be used on the Mirage III/5/50 series?

And if possible could you post photographs with the JK200 system fitted to aircraft?

As theorised over on BTS, I suspect the JK200 is a fake designation/design. Yes the JL100 and the TK500 are definitely real items but I am increasingly doubtful about the JK200.

The photo shown there is actually a JL100

When I was a kid (elementary school) I had a 1/32 scale model of the Mirage III. You could build it with either type of bomb-carrying drop tank. I built the one that had the rockets in the nose of the tanks. The model even had a removable Atar jet engine.
L 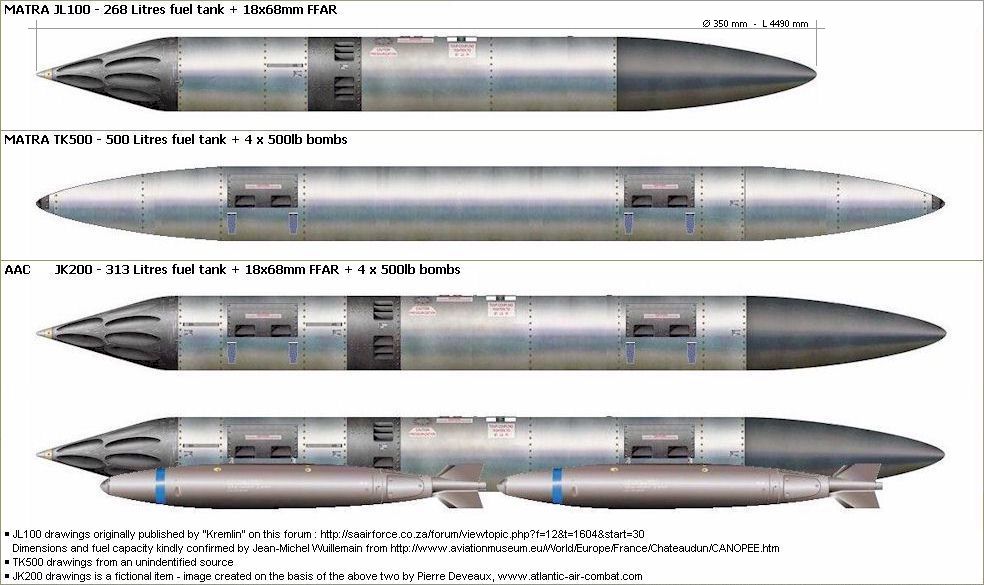 There's someone to ask whether "fictional" described the whole thing or merely the drawing.
S

The photo shown there is actually a JL100
Click to expand...

Good point, I should have reread Pioneer's post before replying!

Were they ever built or tested?

There's someone to ask whether "fictional" described the whole thing or merely the drawing.
Click to expand...

That's the only image I can seem to find as well - I took the words to imply that the item was a fictional creation.
L

There's a possible reason for why a triple combination would not work if it looks like that:

The launching rockets need vents for their propellant gasses, JL-100 has those.
The JK-200 drawing shows the vents in the same places, but some would direct the gasses towards the bombs. I strongly doubt this is how it would be done by the engineers.

The clamp/mounting of the bombs also appears to be where two or more SNEB rockets are supposed to be.
L

Good news: It's NOT really some recent fanart.

It's only drawn there with no photo, and called "RPK".

The diameter is vastly greater than with the JL-100, so rocket calibre may have been different and designation is different ... a combination of drop tank, rocket launcher and bomb pylon has existed apparently, but "JK200" in description and known drawing may be utterly inaccurate.

Although there could have been scaling issues or simplifications in the original drawing (even if it isn't recent fanart).

Hello to all: As the author of the "JK200" bomb carryiong fuel/rocket launcher illustration I may confirm this to be pure fantasy.

The JL100 is presumably well known and while making some research on the subject I bounced on the TK500 bomb carrying fuel tanks carried by Mirage-5 (or like) of the Peruvian Air Force (if I remember well,,,) Within the context of the fiction/fantasy I am working on, I thought why not trying a combination of these two ?

From time to time I see this image being commented here and there, probably borrowed from another source than my own website where its fantasy nature is clearly mentioned. Sorry not to mention it as it's not functional at this moment, and won't before next December or even January (2020 !)

Being here only by "accident", any further question may be sent to me more directly, Best regards to all

Post scriptum : born in another century, I have no reluctance to identifly myself - Honni soit qui mal y pense
Last edited by a moderator: Sep 11, 2019
A

Bombs and rockets on fuel tanks, what could possibly go wrong ?
R

Archibald said:
Bombs and rockets on fuel tanks, what could possibly go wrong ?
Click to expand...