The French AN 52 tactical nuclear weapon and what-ifs

The French Air Force and Navy employed the AN 52 tactical nuclear
bomb on its Mirage III, Jaguar and Etendard aircraft in the 70s and
80s. It was also planned to equip the Mirage IIIV vstol, the AFVG
and the Jaguar M with the weapon.

I have been unable to find any really good drawings or photos showing
how the AN 52 was fitted or would have been fitted. It seems to have
been a larger and more ungainly weapon than the British or US equivalents.

In particular it is hard to see how the Mirage vstol fighter bomber could have carried AN 52 and a fuel load.

Thanks for the interesting links on the French nuclear programme.
It ties in with a rough drawing someone did of a Jaguar carrying an
AN52 under the fuselage. In the absence of any further info I imagine
that all aircraft would have carried the weapon under the fuselage except the Mirage vstol, as I am not sure all the hot jet gases from the fuselage mounted
engines would have done the weapon much good.

When one sees it - just drawing - he says - 'Whoa! It's nuke! And look at the tailfins - it's definitely French one!'

flateric said:
When one sees it - just drawing - he says - 'Whoa! It's nuke! And look at the tailfins - it's definitely French one!'
Click to expand...

...Oh, that could be taken in oh so many ways
J

Mike Belcher of Belcher Bits is now offering a resin 1/48th scale AN-52, actually a pair of AN-52 shapes and three stores pylons: 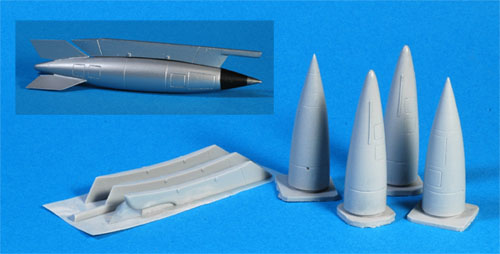 (Image courtesy of Belcher Bits)
This set provides two AN-52 tactical nuclear weapons as carried by Mirage IIIEs and Jaguar As of the French Air Force, and Super Etendards of the French Navy. The AN-52 was a medium-yield tactical weapon, used until 1991 when replaced by the ASMP missile. This set also includes the special pylons used by the three aircraft listed.
Product No. BB30: $16.99
Click to expand...