This model came from the personal estate of the renown Dutch model-maker, Matthijs Verkuyl, and appears to represent a Fokker jet-fighter proposal. It’s configuration is very similar to the Douglas D-558-1 Skystreak but I think it’s a fighter rather than research aircraft because of the clear bubble cockpit-canopy. There’s some writing on the wing that I can’t read/interpret, other than ‘Fokker’.

The model has 14cm span and 15cm length, which assuming 1:72 scale (the standard for most Verkuyl models) would have given the actual aircraft a span of 10m and a length of 10.8m.

Verkuyl didn’t spend time on ‘what ifs’ so I can only assume it was a Fokker fighter proposal.

I’d be most grateful if anyone could shed any light on it.
Click to expand...

This looks like a version of the S-14 Machtrainer: 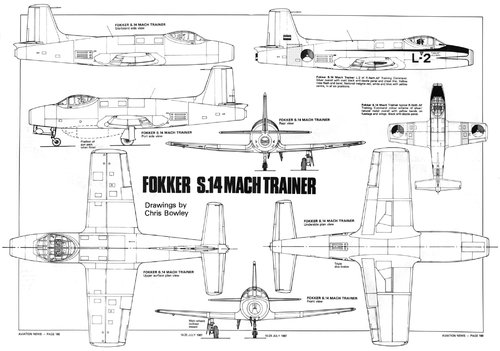 Under Ontwerp (=design) 240, the Fokker team came up with various design alternatives .Final design selected was Ontwerp 240K and work on a prototype was soon started. Although in the final design a side-by-side layout for the pilots was selected, Fokker also studied an alternative (Ontwerp 204J) with the pilot seats in tandem.
Click to expand...

When Germany capitulated in May 1945 and German troops left the Netherlands, there was not much left of the national aircraft industry. The Fokker works at Amsterdam-Noord were practically destroyed ...
www.letletlet-warplanes.com

Did my best to recover the lower line of text.

Only found one article so far, in Air Enthusiast 103 (Jan/Feb 2003) but nothing to positively identify the model.

This artist's impression of the S-14 from Flight from the mockup stage in 1948 would seem to be pretty close to the model with higher tailplane position. 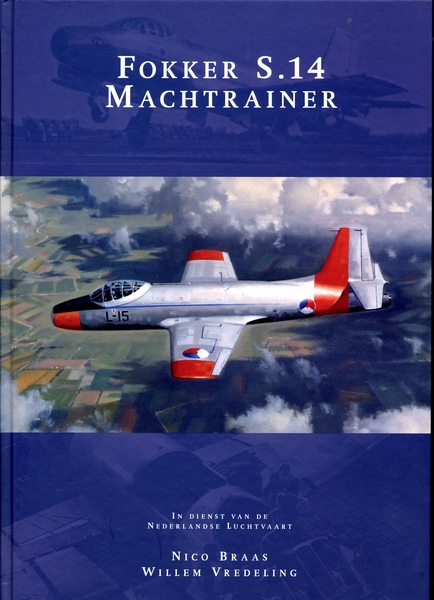 The Fokker S-14 Machtrainer was the first Dutch jet. It was also the first designed jet trainer in the world. All jet trainers from that time period were in fact two-seat versions of existing jets Language: Dutch & English

Nico Braas (member of http://www.letletlet-warplanes.com) has co-authored a book on the Machtrainer which will almost certainly be of interest, and which includes early design drawings etc.

I've emailed him with this topic URL and asked for his opinion.
Last edited: Aug 1, 2020
L

A question i always had with the S-14, why not a fighter.

maybe the answer is here,Ontwerp 265;

Agreed that Nico Braas might know more.
I glance at his Aviation Historian article on the S.14 and some of the early studies does not shed any light, all of the studies shown have low-set tailplanes.
Saying that, I would be very surprised if its not linked to the S.14 in some way.
L

I compared the sideview of the model shown by Paul MM with the 3-views in the ' Fokker S-14 Machtrainer' book by Nico Braas and Willem Vredeling.
I found no matches. The closest I came was with the 3-view on page 23 showing drawing nr 0020-7675 of ontwerp 340
mentioned as the first instigation of the final S-14.
Last edited: Aug 5, 2020

The text of the caption I cited (page 23) is wrong....
Drawing does not compare with the text.

An unexpected twist in the saga from Sir George Cox:

I think that with the help of a Dutch friend I’ve solved the mystery of my model.

The second line of writing on the wing says: STRAAL+T, which means that the complete text would be: Fokker Straaltrainer, which means Fokker jet trainer. However, with its narrow fuselage and single cockpit, the one thing that the model certainly does not represent is a trainer.

My friend’s suggestion is that it is actually a Verkuyl NATO recognition model of the Yak-19. The latter is certainly very similar in profile and has an identical tailplane/fin arrangement. The wings on the Yak are set a bit higher and the span is greater but since the aircraft only ever flew as a secrecy-enshrouded prototype, it is likely that Verkuyl was working from provisional drawings. Subsequently, someone has looked at the model and because of its similar configuration, wrongly labelled it as the S-14.

We’ve still got ex-Fokker contacts thinking about it, but I think we’ve probably got our answer.
Click to expand...

I've added a Western artist's impression of the 'Type 7' from 1948 which was wrongly thought to be Yak-17 but was actually the Yak-19.

Close, but why should the name of Fokker be written on a model of a Soviet fighter...?

Because someone later on looked at it, didn't recognise it as a Yak-19 model and thought it looked like the S-14 so wrote "Fokker Trainer" on it.
L