Maybe someone can help me with these strange and very unknown projects !
I am searching for pictures, drawings and informations about these projects

The flying E-boat project "KRABBE".
What is it ?
A helicopter with torpedoes or it is a helicopter to transport an E-Boat ?

Here the Fl.339 is a large transport helicopter
project powered by a BMW 132A engine
http://www.aviastar.org/helicopters_eng/flettner_kolibri.php

Now I am very confused ! What is right !
Maybe here is a specialist who knows more about these projects

Thanks for the pictures !
The Fa 223 Drache
http://en.wikipedia.org/wiki/Focke_Achgelis_Fa_223
Fa 223 Dackel and Fl.339 for the flying E-boat project "Krabbe" ?
http://www.helikitnews.com/issues/thirdreich.htm
Maybe someone own this book and can show us something about these projects ?
Especially about the Project Krabbe.

Maybe someone own this book and can show us something about these projects ?
Click to expand...

I ordered a copy two weeks ago and delivery date is scheduled by mid August. I'll post more details by then.

I don`t have an operating scanner*, but this is a summary of what Steve tells on the "Krabbe":

It was felt that an helicopter would fare better as a torpedo carrier than airplanes. The helicopter could complement and eventually replace S(E)-boats ( making four equivalent to that kind of boat ), as well as supporting commando operations. Operations would be carried by 8 "Krabben", one leader equiped with radar ( range 10Kms ), two "Flak Krabben" each equipped with at least one 20mm quad, and 5 torpedo carriers sporting a single torpedo. Apparently the "twinning" of 2 Fa223 would be just an initial step towards a novel airframe.

Kyrill Von Gersdorff`s book on german helicopters adds other data, just refering a transport role: span 12m, 1500kg load, 2 seats, but states there was a project for a torpedo carrier, much on the line of the "Krabbe". They could be the same, only with different missions.

* Steve`s book does not include a sketch of this project. For that our guys in the forum could post a scan from Kyrill v. Gersdorff or Manfred Griehl`s books.
M

To pometablava: THANKS FOR YOUR HELP !
To Wurger : WOW! Interesting concept!
Thanks a lot for the great informations about the "Krabbe".

Thanks a lot
M

I have a few questions about the Fa 223 / Krabbe.
Why is a helicopter a better torpedo carrier than an airplane ?
Where is this quad flak located ?
Why only one torpedo ? For such a big helicopter !

Where is the Cockpit located ? In the first fuselage or the second ?

Maybe someone can draw such a flying S-Boot with one torpedo or the flak ?

Many greetings and many Thanks in advance

I have no idea why a helicopter would be preferred to an airplane. Most torpedoes were big (there were tests with up to four torpedoes being dropped by one bomber but most twin engined medium bombers only carried a single torpedo). More importantly I should think that one would keep the weapons load close to the minimum acceptable level in order to carry as much fuel as possible (to compensate for the helicopter's dismal range).

I am pretty sceptical about how this would work. I could see a single fixed 20mm cannon being mounted on such an airframe. Any suggestion of multiple cannons or flexible mounts is likely either the result of a delusional designer or a post war forgery. Still, it is interesting that the Fl282 had a bomb carrying variant planned and that this Fa-223 was planned to carry an MG15...
M

Focke Achgelis 283
http://www.geocities.com/CapeCanaveral/Launchpad/5249/fa283.htm
This source says that this was a jet powered autogyro cargo carrier !
Where does the drawing come from ? Book etc. ?

Other sources says that this was a project for an attack helicopter powered by a 1800hp BMW 801D.
The reactive torque from the rotor was to be countered by a system of two tail rotors in a "V" arrangement !

To Avimimus: THANKS for your reply !

But where is the Cockpit located ? In the first fuselage or the second ?
http://www.lautecmedien.de/heinkel_he_111_z_&_junkers_ju_635_-_aus_zwei_mach_eins-_die_geschichte_der_zwillingsflugzeuge.php

more information on the 'Krabbe' in 'Helicopters of the Third Reich', Steves Coates, with our own J C Carbonel, pp 152-3

But where is the Cockpit located ?
In the first fuselage or the second ?
Click to expand...

“ Fa 325 Krabbe
The Fa 325 Krabbe (Crab) helicopter-crane. Focke commenced work on
it in 1943, and the Kriegsmarine was interested in the design, considering it for the torpedo-carrying role. This was going to be a four-rotor machine, resembling a doubled Fa 223 Drache. It would be powered by two 1,000 hp (735 kW) BMW 301 R-3 (Bramo 323 Fafnir) engines.
Empty weight was calculated at 9,250 kg, and maximum take-off weight at 12,268 kg. Eventually, in 1943 the Kriegsmarine HQ withdrew their support and the Fa 325 Krabbe remained a paper project.”
Click to expand...

"Rotorcraft of the Third Reich"

here is a Flightglobal twin boom helicopter of 1941,designed by Focke.

Wonderful discovery once again, Hesham.
Alas (for my 1939-45 twin-boom collection) the text says this is a Focke Patent 1938, so... too early, while... the journalist imagine this is a near future in 1941 as flying machine, so, as a dream, this is a 1941-project, kind of. I may draw it and include it as such. I will try to find the source patent, maybe. Thanks again, I had never seen such a twin-rotor twin-fuselage craft! ;D
T

I've found the source patent:
http://v3.espacenet.com/textdoc?DB=EPODOC&IDX=GB495176&F=0
(published in Great Britain, that's why it was easy to find for British journalists)

Thanks for this finding !I don't saw it !
T

I’ve added it as “true mistake” on my page
http://cmeunier.chez-alice.fr/update_FG.htm
Thanks again. 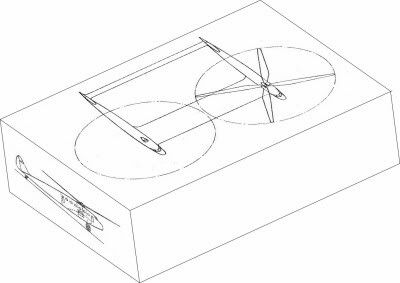 Was the Fa 325 depicted in the previous page a REAL project? Nowarra doesn't mention it, which makes it kind of dubious in my eyes.

Stargazer2006 said:
Was the Fa 325 depicted in the previous page a REAL project? Nowarra doesn't mention it, which makes it kind of dubious in my eyes.
Click to expand...

No image? No text? No specs? Just a link? Come on...
This is most likely a typo that was repeated. I have never seen an "Fa 236" ever mentioned in other sources before...

From http://www.designation-systems.net/non-us/germany.html:
8-236 was allocated to Focke-Achgelis, but no details are available; possibly not used.
S

Thanks redstar72 for this piece of information. I had somehow overlooked it in the RLM listing.


here is the Henrich Focke twin rotor model of 1934 and a prototype
of Focke-Achgelis Fa.330.

A three-view of the Focke Achgelis Fa 224 project, from Air Magazine 43:

1938 Patent application from Prof.Dipl.-Ing Heinrich Focke for German use of helicopter as transport aircraft for airborne troops or paratroopers.
Anyone care to translate the complete article?

kiradog said:
1938 Patent application from Prof.Dipl.-Ing Heinrich Focke for German use of helicopter as transport aircraft for airborne troops or paratroopers.
Anyone care to translate the complete article?
Click to expand...


we discussed it here;


the Fa.223Z was proposed by Focke with two bodies joined inline to form a four-rotor
heavy lift helicopter project.


Who heard about this beast before ?,and who can imagine its configuration ?.

Maybe this one, found on http://paralympic-ph.com/germanvtol/fockeachgiles/284folder/233z.jpg ?
Not a "Zwilling in the sense of, say, the He 111Z, but more logical. And it's designated Fa 223Da
on that site (http://paralympic-ph.com/germanvtol/fockeachgiles/284folder/fa284.html, sorry, had
a typo in the file name), not sure what it meant, maybe "Doppel Antrieb", because it used two
complete dynamic systems, but it could as well have had no special meaning at all. At least, this
designation is mentioned in several sources, whereas "Fa 223Z" is unconfirmed, as Skyblazer correctly
pointed out.