"Firms Prepare for $35B Canadian Naval Boom"
by David Pugliese

VICTORIA, British Columbia — Domestic and foreign defense firms are gearing up for a multibillion-dollar boom in naval contracts as Canada enters a two-decade cycle of constructing 28 major warships and 116 smaller vessels.

The Canadian government has announced plans to build the vessels as part of its National Shipbuilding Procurement Strategy (NSPS) and expects to spend about 35 billion Canadian dollars ($35.1 billion) over the next 20 years on NSPS construction.

But other companies from Canada, the U.S. and Europe are positioning themselves to supply everything from missiles to radars to propulsion systems for the new vessels.

The construction of 116 smaller federal government and Royal Canadian Navy vessels will be set aside for competitive procurement among the Canadian shipyards that were not selected under NSPS. Those contracts are expected to be worth around 2 billion Canadian dollars.

On Oct. 19, Seaspan announced a 200 million Canadian dollar expansion of its Vancouver facilities in preparation for NSPS work. Public Works Minister Rona Ambrose said the NSPS is designed to make sure the country’s shipbuilding industry is supported over the long term.

“Seaspan’s $200 million investment in Vancouver Shipyards to make it a world-class shipbuilding center of excellence is proof that the shipbuilding industry is back to stay in Canada,” Ambrose said.

Irving Shipbuilding has also announced it will spend around 300 million Canadian dollars upgrading its shipyard facilities for NSPS. The upgrade work will take place over the next year.

But industry representatives said much of the high-tech work on NSPS will focus on the systems to be installed and integrated on the ships, not the actual construction of the vessels. That work has prompted Atlas Elektronik, jointly owned by EADS and Germany’s ThyssenKrupp, to set up a Canadian subsidiary. The establishment of Atlas Elektronik Canada was announced Sept. 24 and will operate from both Victoria, British Columbia, and Ottawa.

“We are positioned to deliver proven and leading solutions in areas such as mine detection and disposal, sonar, command and control in support of the Royal Canadian Navy and the national shipbuilding, as well as procurement strategy effort,” Rick Gerbrecht, head of Atlas Elektronik Canada, said in a statement.

The Royal Canadian Navy has selected ThyssenKrupp Marine’s Berlin-class design as a potential design for its new joint support ships to be built under the NSPS. But ThyssenKrupp is also interested in work on the new Canadian surface combatant (CSC), which will eventually replace the Navy’s destroyers and frigates, industry representatives say. Of the 21 combat vessels Irving will build under the NSPS, 15 to 17 are expected to be in the CSC class.

Some U.S. firms, which already have had a long presence in Canada, are also lining up for potential NSPS work.

Lockheed Martin Canada, which has the contract to upgrade command-and-control systems on Canada’s 12 Halifax-class frigates, is looking for similar work on the CSC to be built under NSPS.

L-3 MAPPS of Montreal, an L-3 subsidiary, is integrating its battle damage control system and platform management systems on the upgraded Halifax-class frigates. The company sees potential for those systems to be installed on the joint support ships, Arctic patrol ships and the CSC to be built under NSPS.

Raytheon Canada has also made a presentation to Canadian Defence Department officials about outfitting the CSC vessels with the most up-to-date generation of Tomahawk cruise missiles. Such weapons could be used for defending against sea-skimming missiles or for providing support for troops on shore, according to Raytheon officials.

Raytheon Canada Vice President Denny Roberts said the company has also been told by the Navy that the joint supply ships would be outfitted with the firm’s Phalanx Close-In Weapon System (CIWS).

“We expect there will be two CIWS per vessel,” Roberts said.
Click to expand...

As a Canadian, I can assure you that these statements are just as true as anything else a Canadian politician says.
B

Bill Walker said:
As a Canadian, I can assure you that these statements are just as true as anything else a Canadian politician says.
Click to expand...

Dammit! And I was hoping so hard too!

Some of the scraps that remain, so to speak: 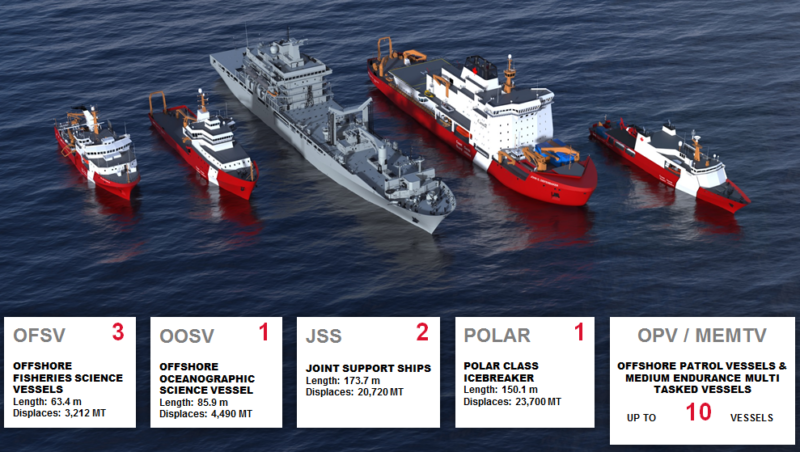 Under the National Shipbuilding Strategy (NSS), Seaspan Shipyards will build 17 ships for the Canadian Coast Guard and Royal Canadian Navy in our initial inventory of work. This package of non-combat ships includes the three OFSV-type vessels currently under construction. The vessels we are...

Information about large vessel shipbuilding projects including both combat and non-combat vessels.