He wants the travel pod to provide levitation (lift) inside the tube via air cushion to cut costs.
Loss of lift at 700mph in an enclosed space could get ugly....

An interesting idea but certainly I wouldn't fancy riding it. Having done the SF-LA trip he talks a few times, I'd stick to m'car, thank you very much... Trapped in a semi-evacuated tube, travelling at 17R? Hmmmm....

This rather reminds me of a book I read as a child - [IIRC] 'Tas and the Postal Rocket'. A tale about a couple of Australian kids who stowed away on (suprise, surprise... ) a rocket being used to speed up the postal service. OK, what we ended up with (the internet) is maybe less spectacular but a lot more useful. All this is a long-winded way of questioning the [long-term] need for such things. Maybe in the future, long distance travel will be a purely leisure activity? Maybe this system will have use in cargo transport?
M

A huge tube on pillars with earthquakes? great idea, sure!

Some thoughts on the BBC story:

The costs given for the California High Speed Rail (CAHSR) are not to be trusted. Originally promised to cost $35-37 billion, the cost estimates s had ballooned to over $110 billion with no end in sight. When Gov. Brown stepped into the fray, the cost magically shrank to $68 billion. A few weeks later, after the press died down, it was discovered how that price was reached: The average speed of the trains was lowered, 220mph is now only a peak speed that doesn't have to be sustained for any time to meet their new claims. There is no schedule now for when if ever the promised SF to LA trip time will be achieved. There is no plan for where the power to run the trains is going to come from. In fact, the train segment for which they're hoping to start construction next month does not have any power to electrify the trains. That's OK, there's no provision for actual trains, either. The promise to build profitable segments during the construction has been abandoned. The land acquisition price has been artificially lowered, etc. Even the new price claims are being widely questioned. The fare estimate is not based on the costs of the system or cost recovery, but rather simply as a percentage of whatever the airlines happen to be charging,

So, for a more accurate comparison the Hyperloop should be compared against a $110 billion system.

That said, CAHSR proposes 11-12 stations on the SF-LA route (got to spread the tax money around among the local politicos, you know), while Hyperloop has only two. Also, I must look with a jaundiced eye on Musk's assumption of an average 120 W/sq. meter from the solar panels. When you allow for the times when the panels aren't getting the absolute maximum solar radiation, the times the panels aren't clean, the conversion efficiency, storage for low solar activity (e.g. night) and assuming zero transmission loss (i.e. the solar panel energizes only the area directly under it), etc. that seems a really high figure. Of course, he does say he'll tap the power grid when solar power snit available.


This could be interesting to watch.
R

Websites for the "Hyperloop-Alpha Study" at SpaceX and Tesla:
http://www.spacex.com/hyperloop

Has more detailed information and discussion of the overall concept and how it works.

(Edit) I also meant to point out a similar lower speed system for feeder routes and inter-city type transit:
The "Aeroduct" sytems:
http://web.archive.org/web/20080706012716/http://www.aeromobile.com/aeromobile_vers2/aeroduct1/aeroduct1.htm

I am pretty sure Elon Musk is a magician ("Any sufficiently advanced technology is indistinguishable from magic.") so i wish him all the luck.

That's actually quite an old idea that existed decades before Elon Musk took an interest in it.
When i was in my teens there was an article in the French magazine Science & Vie that proposed building an hypersonic maglev train that would travel at Mach 20 under the North American continent. I believe they were talking about having a tube crossing the Atlantic as well. So imagine, the Elon Musk plan looks like cake walk in comparison.

The main obstacles to the Mach 20 train project would have been the tectonic plates and earthquakes, keeping a total or near perfect vaccuum in the tubes (imagine the friction on the nose of the trains at Mach 20 !), avoiding possible technical failure of vaccuum pumps and other systems, human errors and terrorism risks.

However, even though it would be a tough challenge to realize such a plan on Earth, it would be the PERFECT transportation system on the Moon. Total vaccuum is already available, you can totally ignore the requirements for thermal management (at least for the friction, heat from the sun and extreme cold temperatures still will need to be addressed, evidently, but with the hypersonic thermal management out out of the way, the project would be much less complicated, all you have to do is build the tubes, bring the materials there or build what you can with what's available on the Moon itself to lower costs. Obviously working in space suits and having to travel and bring equipment to the Moon would make the project much more expensive than on Earth, but i am just curious how much more it might cost compared to say burying tubes and infrastructure at the bottom of the ocean.. I am starting to have ideas on how they might build the lunar tubes out of local materials. Plenty of solar energy is also available, or just with one nuclear reactor plant they could power it. One day if we have serious colonies and cities on the Moon, this would be the perfect inter-city transportation network.

Desert Dawn said:
The main obstacles to the Mach 20 train project would have been the tectonic plates and earthquakes, keeping a total or near perfect vaccuum in the tubes ...
Click to expand...

Even if the vaccuum is kept, bends and kinks probably would be catastrophic, I think. And the moon isn't free from quakes, too.

Its cheap by high speed rail standards too - that tends to cost at least $60 million per mile, and usually a lot more.


I would like to get that for the so-called "Kanzler U-Bahn" (chancellors subway) in Berlin ! That's a
connection between two existing subway línes, of about 2 km, so no new technology and is expected
to cost 433 million € (!) in the end. It's underground, of course, but the trains don't eceed a speed of
about 60 km/h ...
http://www.welt.de/wirtschaft/article122206456/Kanzler-U-Bahn-wird-fast-100-Millionen-Euro-teurer.html 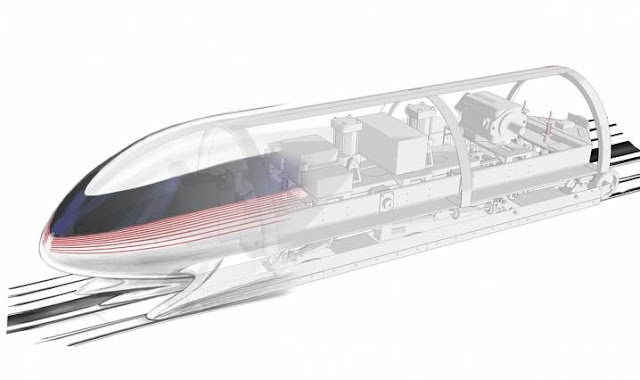 A few recent stories from Gizmodo:

What happens when two people want to look out of the same "window"?

It is interesting that most pod competition entrants have moved away from using the forward air compressor and air levitation system of the original design, the majority seemingly moving to a streamlined pod using maglev provided that that "hover engine" startup Ar Pax

Giant underground traffic tunnels. Like to see this for a underground rail mobile ICBM as well. ;D

Giant underground traffic tunnels. Like to see this for a underground rail mobile ICBM as well. ;D
Click to expand...

Or a tunnel under a busy street in front of SpaceX to prevent pedestrian injuries.

Meh. Stepping through the video at random, the first (fairly basic) point he makes is incorrect. Doesn't instill confidence that he knows what he's talking about.

Hobbes said:
Meh. Stepping through the video at random, the first (fairly basic) point he makes is incorrect.
Click to expand...

His first point was that there had been "wall to wall" coverage of the hyperloop competition that week. That may be a bit hyperbolic, but hardly "incorrect" as such.

Doesn't instill confidence that he knows what he's talking about.
Click to expand...

Fine, then watch it with the audio off. Watch the video of absolutely *none* of the competitors achieving *anything.* Their hyperloop vehicles are accelerated down the tube by a simple electric car "pusher," and then once released.... they promptly grind to a halt. They fail *embarrassingly* badly.

Must be nice to be some middle aged guy, sitting in an ivory tower full of knowledge and shit on some engineering students that surely must be idiots. : Does this kind of attitude come with age or were you always like this? Same thing about murmuring how "everything was better before" while not attempting anything new because reasons. And god forbid anyone trying!
Share:
Facebook Twitter Reddit Pinterest Tumblr WhatsApp Email Share Link
Top