The XB-42 as it looks today, at NASM Silver Hill.

Thanks for the pics!I didn't realize it was still in existence. It took me years just to find a couple of photos of the cockpit.
J

Manufacturer models of the XB-42A and XB-43 bombers. Note taller vertical stab on gear-equipped model. I'm not sure if this came before or after the shorter fin. Perhaps somebody has the answer?

Speaking of the XB-42/43 Mixmaster/Jetmaster, here's an unmarked pic I found through the Life Magazine photo archive on Google. Unfortunately, Google/Life haven't "opened" the tagging on these photos (as they have on "The Commons" on Flickr). There are hundreds of historically significant aircraft captured by Time/Life's photographers, but very few of them are adequately or accurately labeled or tagged.

Go to the Google Life photo archive here:
http://images.google.com/hosted/life
Type in "Muroc" in the search field and look at what comes up. 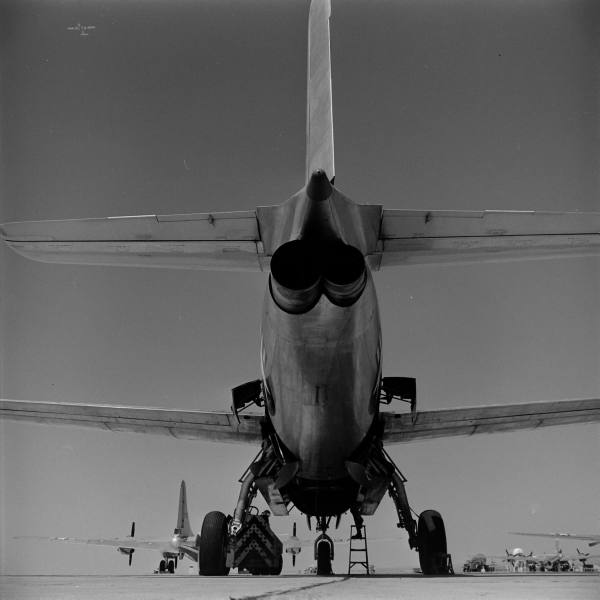 This time typing in "mixmaster"

Wow. That LIFE archive sure is amazing!

...And a newsreel featuring the "Mixmaster":

Assuredly a vintage item, not a modern rebuild! Here is one picture from the set:

Hickam? I don't know, especially looking at the architecture on the horizon. Perhaps more like Clover Field.

The XB-43 spent some time at Norton AFB in San Bernardino, CA parked next to the street. The "Hickam" picture background doesn't look a whole lot like NAFB, but it might be.
S

hermankeil said:
The XB-43 spent some time at Norton AFB in San Bernardino, CA parked next to the street. The "Hickam" picture background doesn't look a whole lot like NAFB, but it might be.
Click to expand...

Careful! We're not discussing the XB-43 Jetmaster here, but it's forerunner the piston-powered XB-42 Mixmaster!

With a REGULAR cockpit à la Skyknight??? I think (no, in fact I'm positive) that I've NEVER seen this aircraft in all my life! Wow.

Here is one from the back I think.

If you look close at the canape it looks like it is one not two.

Just realized that pictures MM1 and MM3 in Page 1 of this thread also depicted the second XB-42.

A bigger version of MM3 is attached below.

That cockpit's shape makes a lot more sense when put in perspective with the projected "DC-8" Skybus and Sky King Jr. projects.

Many differences are visible: the early design featured a third blister for the gunner, three rear-firing cannons (two on wing trailing edges and one though the counter-rotating prop hub), a higher-mounted wing, longer nose, smaller tail fins, a 7-deg. dihedral on the horizontal stab., a raised prop thrust line, no tail skid and more.

I think the trailing-edge guns could be aimed -- at least in elevation -- while the tail gun was, of course, fixed.

circle-5 said:
Pictured here is a very early design of the Douglas B-42,
Click to expand...

There's quite a collection of exterior shots here, but does anyone have interior shots? The only pics I have of the panel and interior are from AAHS and they aren't many.
C

circle-5 said:
Pictured here is a very early design of the Douglas B-42,
Click to expand...

Totally awesome indeed. What can still be found of the Mixmaster never ceases to surprise me.
B

Hmm interesting Swedish connection there in that sideview drawing you posted!
P

For all the years I have liked the XB-42 & XB-43, I was never aware of the defensive 'trailing-edge guns'

Thanks for sharing this info and pics