Although Dornier never actually built a racer, there were several designs, as for
example the S.4, which was designed for the italian Societa die Construzioni Mecchaniche
di PISA (SCMP) in 1923, or another design for the Coupe Schneider in 1927, already with
the wellknown push-pull engine configuration. Additionally I've attached an artits's impression
of the aircraft shown by Hesham, Dorniers last design for the Schneider Trophy, the flying
boat from 1931 with a shaft driven prop .
(from Jet & Prop 1/1993)

and in Flightglobal site,the aircraft had two propellers;

It makes no sense to me why Dornier would even consider a flying boat design for the 1931 race. Considering their design evolution from 1924 through 1929 were twin floatplane designs and last time a flying boat design won was in the 1921 race the Macchi M.7. The power loading had to be lower than the 1929 contenders such as Supermarine S.6 with a Rolls-Royce R 1900 hp and Macchi M.67 with an Isotta-Fraschini 1800 hp.

Maybe it was disinformation being let out in 1929

"It makes no sense to me why Dornier would even consider a flying boat design for the 1931 race."

Just a guess: Because of the lower frontal area ? The hull of a flying boat would have had about
the same frontal area, than the fuselage of a floatplane, the auxiliary floats less, than the main
floats. In the design from Flight, of course (Good find again, Hesham !), there would have been
additionally the drag of the engines. But at least the design with the z-shaft driven prop, should
have been competitive with regards to the frontal area, I think .

"Dornier S.4 Greif (Griffon)
in 1924 the dornier company at Pisa Marina in Italy revealed some brief details and illustrations of the wind tunnel model of a twin-float project for that year's contest.
Designated S.4 and powered by an undisclosed water cooled vee engine of about 500hp, it was a mid-wing cantilever monoplane with cantilever tailplane...
each of the single step floats was carried on a pair of slim struts with spreader bars between them... presumably ...wire braced an d some illustrations appear to indicate...Forlannini type floats...span 8.8m; length 7.7m, no other information has survived."

for the 1929 contest, dornier again produced designs and models of an unconventional project. similar to the italian [savoia] S.65...no dimensions, weights or performance details are available for this design..."

From Jemiba "Just a guess: Because of the lower frontal area ? The hull of a flying boat would have had about the same frontal area, than the fuselage of a floatplane, the auxiliary floats less, than the main floats."

The article in flight (on page 409) indicated that there was penalty in weight and parasitic drag. It is my opinion that parasitic drag which is critical in pylon type racing would have been alot higher with this design considering it has a wing area sized for the heavier weight, draggy flying boat hull, and separate nacelle not embedded in the streamline fuselage which was typical of the twin floatplanes at that time.

I read the benefits they were claiming for this approach in this article, but it seems to me they do not offset the penalties.

I guess we will never know what was going through designer's head.

It makes no sense to me why Dornier would even consider a flying boat design for the 1931 race
Click to expand...

it's NOT a dornier flying boat!

Edit.. don't think i made myself quite clear here, i meant the image posted by hesham, the one posted at the top of the thread _is_ a dornier project.
S

A better scan of the unbuilt Dornier racer for the 1931 Schneider trophy, from Air Enthusiast, Dec. 72:

Correct me if I'm wrong (I'm no expert on the optima for floatplanes vs. seaplanes), but: Wouldn't reduced interference and skin friction begin to be larger issues at 650 km/h?

The switch to a single body rather than three interconnected bodies will improve these areas (Even if structural weight ends up being higher).

Another sketch, from Flight


here is a complete 3-view drawing to Dornier 1928 racer project.

Haven't checked the outlines, but careful at least with the dimensions. It's a plan
for a model !

From a TSAGI book, notable for showing the location of the surface radiators

This is moving into speculative territory... but if this project had gone ahead - how do you think the floats would've been enlarged (given the thinking of Dornier in 1931?)

Would it have been lengthened to increase the maximum size of the retractable floats?

Would conventional floats be placed under the outer wings?

Would sponsons be preferred?

I think, the retractable auxiliary floats were an important feature of this design, so lengthening/
enlarging them would have been the solution of choice. To add fixed ones or sponsons would have
brought this design back into the class of the floatplanes, with regards to frontal area.

I don't think that Dornier had put much detail thought into this design, there are too many dubious features. Probably just a quick speculative sketch.
The separate planing bottom is a poor design, typical mid-1920s rather than 1931, and crude by Dornier standards. The balance floats look to be far too small and mounted too high on the fuselage to be effective. The braced tailplane is odd . The sketch of the two right-angle gearboxes look highly optimistic to handle 4000hp. The pilot's view is as close to zero as makes no difference.

I agree. This reminds me a bit of the Junkers J.1000 (from a few years earlier):

It was also a project with no chance of construction given the conditions of the day, designed around 'future' engines with much more power than any engine of the period, and probably intended mainly for press consumption.

It also shows signs of not being fully validated (in the J.1000 case it would have likely suffered from the 'Tarrant Tabor syndrome' during takeoff and had dubious controllability if one of the outer engines failed).

That said - they are both very interesting designs. It is interesting to try to figure out what they would have lead to if pursued.

Nowadays we probably would call it a "concept", not a project, drawn more to show those features like prop driven
via a Z-drive and retractable floats, than to be realised in itself.

Yes indeed, like a large percentage of designs shown on this site it is best called a concept rather than a project. I've moaned about the misuse of the word 'project' several times on threads, just something that winds me up

Supermarine proposed a flying boat with a similar layout to the Dornier concept in 1924 and soon ran into all kinds of problems with gearbox development, cooling requirements, and structural design. It was abandoned.

I thought I would post another pic with associated text referring to the 1929 Dornier Schneider project. Source Aero Digest 1929, https://archive.org/details/aerodigest1415unse/page/120/mode/2up 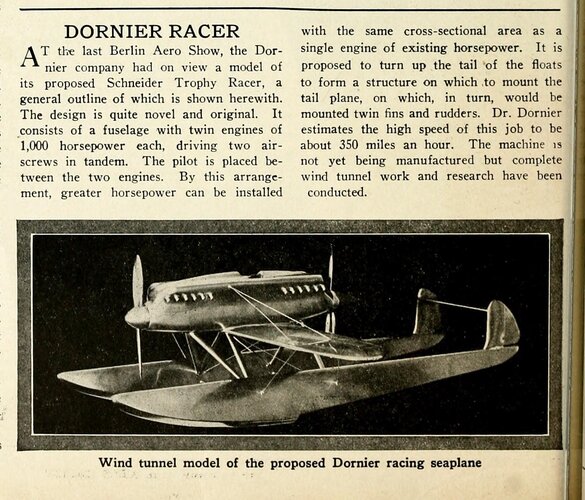 I'm pretty sure I saw that one during a documentary about the Spitfire.
T

Foo Fighter said:
I'm pretty sure I saw that one during a documentary about the Spitfire.
Click to expand...

More likely to have been the Savoia-Marchetti S.65, which has the same basic push-pull configuration. The SM.65 was actually built and attended the Schneider race in Calshot in 1929, but was not flown in the race. It was featured in the press. Crashed during later development, so never made it to the races to compete.

Thanks for the pointer, not the one I was sure I saw but the program I saw it in might be wrong. Head like a bleepin' sieve honestly wonder sometimes how I get out of bed in the morning. Actually after the trials I had with amazon today I wonder why I bother. Duvet day? New balls please.