Is anybody familiar with the designs of Gliddon S Doman? This larger one was shown in "Der Flieger" magazine issue 9/1954 (page 206), but nothing about a D-... designation ...

boxkite said:
Is anybody familiar with the designs of Gliddon S Doman? This larger one was shown in "Der Flieger" magazine issue 9/1954 (page 206), but nothing about a D-... designation ...
Click to expand...

Only vaguely. Glid Doman's company built about a dozen helicopters. You probably can find information from the AHS website: http://www.vtol.org/ and the New England Air Museum: http://www.neam.org/articles/a_doman1.asp

Doman, temporarily, made Connecticut the undisputed center of the helicopter universe, with Sikorsky, Kaman (both still exists, and both still make new helicopters) and Doman.
B

Another photo of the Doman Fleet ASW helicopter :
(from InterAVia Bulletin 1956)

After receiving a layoff from Sikorsky Aircraft, I had the opportunity to work for Glidden Doman in 1959 - 1962.

He had originally worked as an engineer for Sikorsky Helicopter and had proposed a new transmission/rotorhead design which was not readily accepted by the engineering department of Sikorsky Aircraft. He had faith in the theory of his new design and soon left Sikorsky to find his own company. All of the dozen or so of us working at Doman Helicopters had faith in the design which was remarkable. Most helicopters of the time had a massive gear reduction at the reciprocating engine and power was transmitted to the transmission/rotorhead as low speed/high torque via a hollow shaft of 5 to 6 inches in diameter.

The Doman design had engine gearing that sped up the output RPM to transmit power via a solid shaft of about 1 and a half inches diameter at a high revolution. The force being transmitted was low torque/high speed.

The rotorhead transmission was completely enclosed. All mechanical linkages were housed within the transmission body which gave the appearance of having the rotor blades project from the large transmission "can" which sat above the fuselage. The efficiency of the design allowed the Doman helicopter to carry a much higher payload and it was much more efficient at altitude. It was the only helicopter of the period which had the ability to cross the Andes Mountains carrying a payload. Many of the records then set remain unbroken.

Test pilots reported the absence of high vibration and ease of control. Due to it's stability, the craft could be flown without having a death grip on both yoke and cyclic sticks.

War is the father of all great developments, and if Doman could have survived into the Vietnam War era we would see the Doman design as the standard of today's helicopter.

The system was patented and information may be attained through the U. S. Patent Office. As these patents have now expired it may be time for someone to resurrect the design.
D

Some web URLs about Doman.

Very enlightening thank you for posting that

I wonder if Boxkite's first post shows the Berlin-Doman BD-19?
It seems that this new firm was created after the demise of Doman Helicopters Inc. maybe around the same time as the Puerto Rico based Caribe Doman company was formed. I know nothing about the BD-19 other than the designation.
S

Hood said:
I wonder if Boxkite's first post shows the Berlin-Doman BD-19?
It seems that this new firm was created after the demise of Doman Helicopters Inc. maybe around the same time as the Puerto Rico based Caribe Doman company was formed. I know nothing about the BD-19 other than the designation.
Click to expand...

No it's not. I do not have a picture of the BD-19 but I know it was to be an 8-seat transport helicopter powered by two Allison turbines.

Thanks a lot for the BD-19 photograph... but it can't be the same as the one in the first pic. Check the length of it, the number of windows, the shape of the fuselage...

No one thought about asking Glidden Doman, or the New England Air Museum?

Gosh! Thanks for the pointer. I didn't even suspect Glidden Doman was still alive!

He may be the last of the original helicopter pioneers left.

I recently came across this very lousy picture of a 1958 helicopter refered to only as the Doman D-12.

Has anyone heard of this one before? It could be a small R/C model of course, but it could also be a genuine prototype. Hard to tell given the poor quality here...


but I know only the D-11,obviously this is a new one,and may be
it was RPH or R/C model,I will check about it.

Skyblazer said:
I recently came across this very lousy picture of a 1958 helicopter refered to only as the Doman D-12.

Has anyone heard of this one before? It could be a small R/C model of course, but it could also be a genuine prototype. Hard to tell given the poor quality here...
Click to expand...

does any one hear about Doman BD-68 design ?.

hesham said:
does any one hear about Doman BD-68 design ?.
Click to expand...

The Berlin Doman BD-68 was to be a three-engined development of the Doman D-10B.

Many thanks to you my dear Apophenia.
S

Thanks, hesham. Since my initial question, I'd found some more on the D-12, which was called the Whippet:

Yep. This was the Doman LZ-4, a research and development helicopter. More about it here:

In 1945, Glidden S. Doman formed Doman Helicopters Inc. in order to develop various helicopter engineering concepts. These included a new hub system which was essentially similar to the mechanism used on a variable pitch propeller. The rotor system also incorporated a gimbal mounting to provide the necessary tilting of the rotor disc. Doman's theories were tested initially by installing an experimental system on a USAF Sikorsky R-6. This helicopter was known as the Doman LZ-1A and it started flight tests in early 1950 with remarkably good results. It was followed by the larger LZ-2A Pelican.

Doman's system was then designed into a larger helicopter that was seen as a viable commercial production machine. The LZ-4A had a capacious fuselage with three rows of double seats in the main cabin and a two-crew flight deck in front. Large folding doors provided access for loading bulky cargo into the main compartment. The tail boom was conventional with a cranked-up rear section mounting a tail rotor, and the LZ-4A sat on a four-leg undercarriage with trailing link dampers. A 400hp Lycoming SO-590-B engine was positioned in the lower nose, driving the four-blade rotor via a flexible transmission. Following its first flight in November 1950, and subsequent testing, Doman moved on to the improved LZ-5 and transferred the LZ-4A (N74147) to Curtiss Wright as a test vehicle.
Click to expand...

The LZ-4 is the engineer-produced and hand-built prototype of the LZ-5. Built specifically for research purposes, it was taken over by Curtiss Wright, where it was given the designation of CW-40. The LZ-4's maiden flight took place in November 1950.
Click to expand...

P.Lambermont "Helicopters and Autogyros of the World", 1958

boxkite said:
Is anybody familiar with the designs of Gliddon S Doman? This larger one was shown in "Der Flieger" magazine issue 9/1954 (page 206), but nothing about a D-... designation ...
Click to expand...

here is a three Projects to Doman,one displayed by my dear Boxkite before as an ASW
Helicopter Project for Canada,second was Fuel Tank Helicopter (FHT) for USAF and the
third was an All-Weather Instrumentation Helicopter.

Another picture of the Doman ASW helicopter.

The second picture helicopter was called HC-1,and the HC-2 was developed from it and had
more powerful engines fore and aft the cabin.

hesham said:
does any one hear about Doman BD-68 design ?.
Click to expand...

The Berlin Doman BD-68 was to be a three-engined development of the Doman D-10B.
Click to expand...

Here is an cut-out from the '1968 United States Aircraft, Missiles and Spacecraft' with data of the BD-68. The publication is available free on Google Books (https://books.google.pl/books?id=NThKAQAAIAAJ).
Piotr 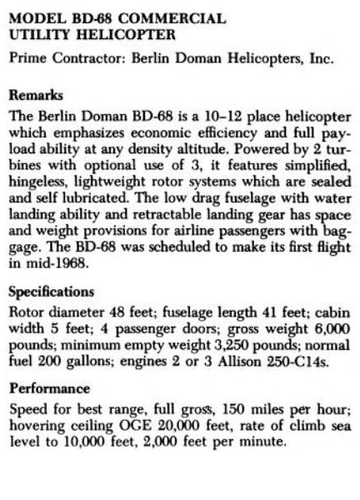 and in JAWA 1969 as I displayed before,the mentioned the DB-68,which let to develop the smaller
one version,the BD-19.

"The driving force behind Doman engineering was sharp focus on understanding what the helicopter and especially its blades and rotor hub were doing,” said Susan Orred in a 2013 profile of Doman. “The resulting insights produced the firm’s hallmark trait - aeronautic design with elegant simplicity.”


In the 1950s, the company produced three LZ-5 helicopters, which employed his rotor designs and other innovations. They could carry six passengers plus a pilot and copilot, and received both military and commercial certification.

He hoped to gain military contracts, and two LZ-5s were sold to the Army. However, the military never bought any more. Lack of government contracts spelled doom for the company, which had as many as 130 employees. It moved to Pennsylvania in 1965 and closed in 1969, The only remaining LZ-5 is at the New England Air Museum at Bradley Airport in Windsor Locks, along with a smaller Doman R-6 helicopter.

Doman spent several years with Boeing, designing rotors for giant heavy-lift helicopters. He then turned to a new career as chief systems engineer of the wind energy program at Hamilton Standard, developing huge wind turbines, which share some blade technology with helicopters. In 2003, he formed Gamma Ventures Inc. to market production rights for the turbines he helped design in Italy.

hesham said:
From University of Illinois at Urbana–Champaign project hummingbird 1961,

The following brief and chatty texts might be of interest: 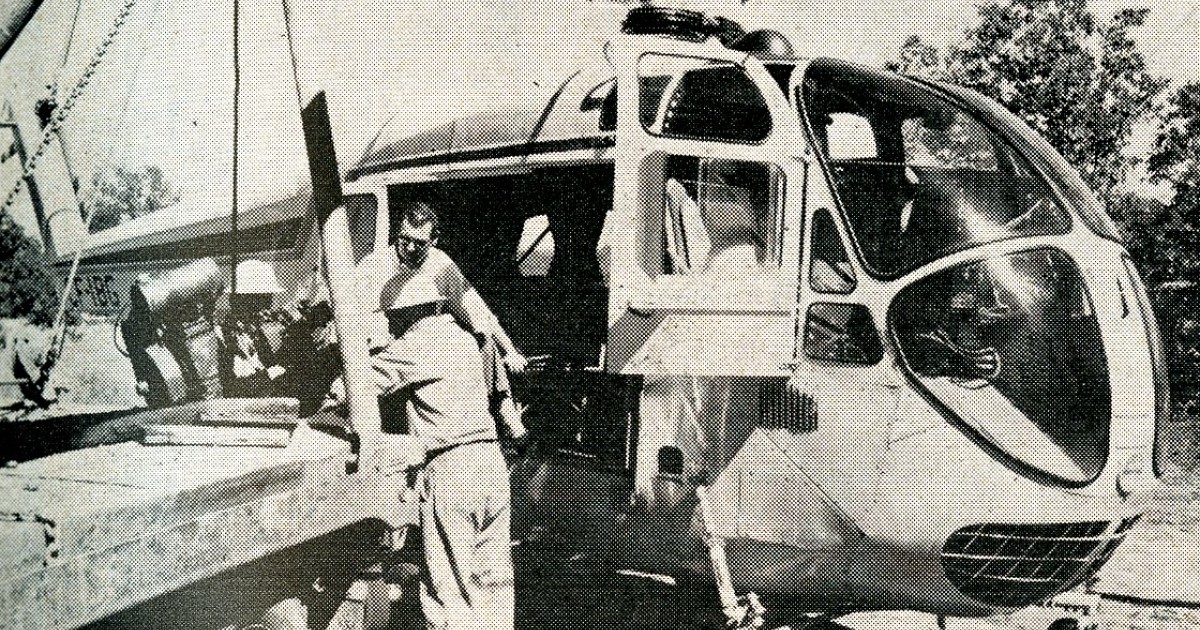 To dream the impossible dream, Part 1 | The Channel

An interesting helicopter production project in Canada began in 1953. 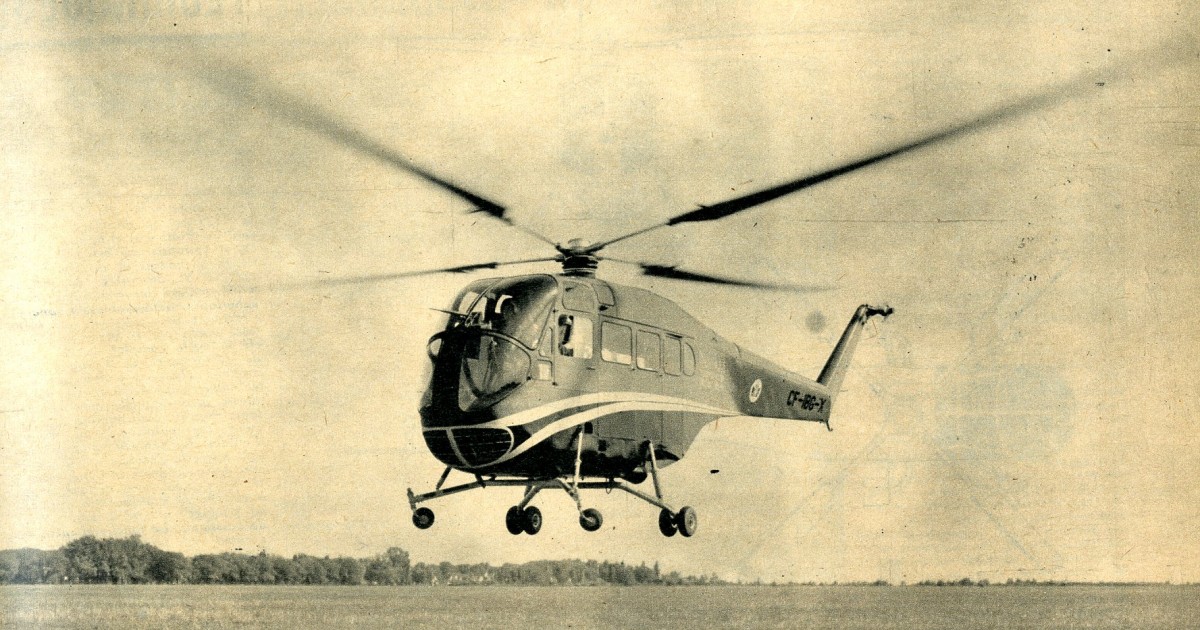 To dream the impossible dream, Part 2 | The Channel

Hello again, my reading friend. Let us pick up the thread of our story without further ado. 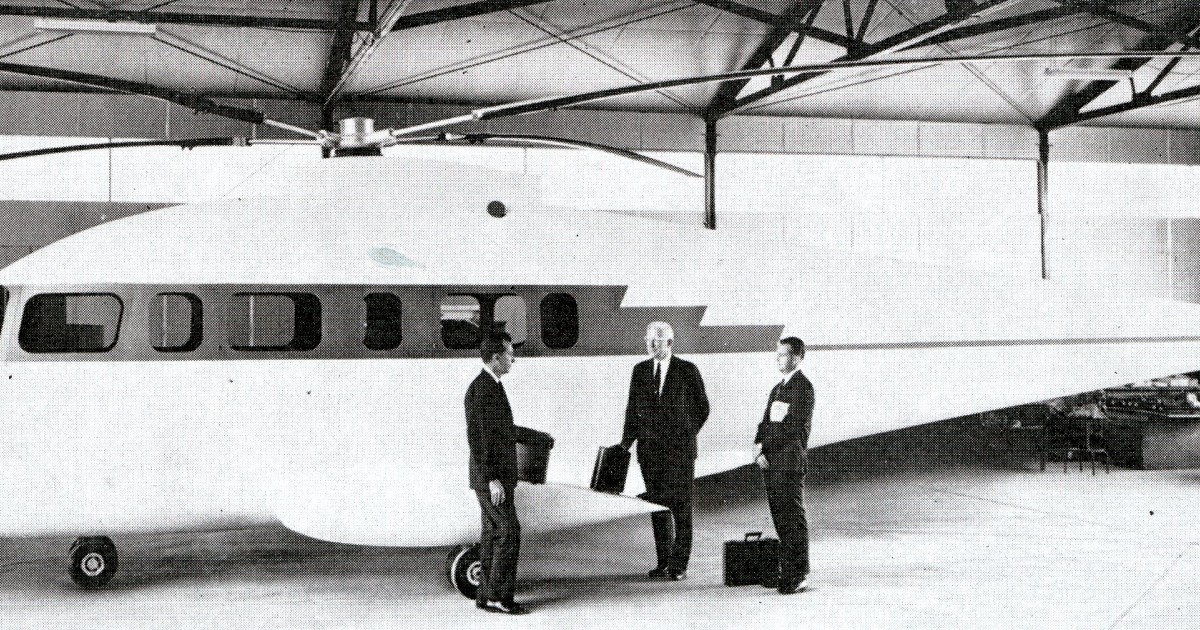 To dream the impossible dream, Part 3 | The Channel

Again, hello, my reading friend. Are you ready? Let’s go.

As described in Part 2 of fortrena's article, the 'Doman R-6' was the LZ-1A. For the USAF, it was a Sikorsky R-6A. In other words, a Sikorsky Model 49 fitted with Doman Helicopters' simplified rotor head and hingeless blades.

BTW, this aircraft is preserved at the New England Air Museum: