here is a single seat low-wing light aircraft Project,designed by Mr. Vlada Verner from Czech (as I think) and
it was called W-1,it was mentioned in JAWA 1972/1973,but I am not sure if it was a Project or not.

Yes, it was built. This plane, know as Verner W-1 Brouček (Little bug) was designed by Vladislav "Vláďa" Verner with the help from people from VZLÚ institute and others and built by him in his house at Brandýs nad Labem, Bohemia. First flight, 23. March 1970. Engine at first Praga B-2, later Praga D (rebuilt from Praga DH helicopter engine). Flown by his maker for many years, including shows in Germany and England, in 2003 it crashed and was slightly damaged. In 2007, it was given to the Aviation museum of VHÚ, Military History Institute (aka "Kbely museum"). Renovated, it was borrowed to the Metoděj Vlach Aviation Museum at Stará Boleslav, where it sits today.

OK my dear Aubi,I will change the title.

Hi, I'm so sorry, I can hardly speak English, so she uses a translator ...

Mr. Prazak was one of the aircraft designers in Aero Vodochody...
From L+K 1994 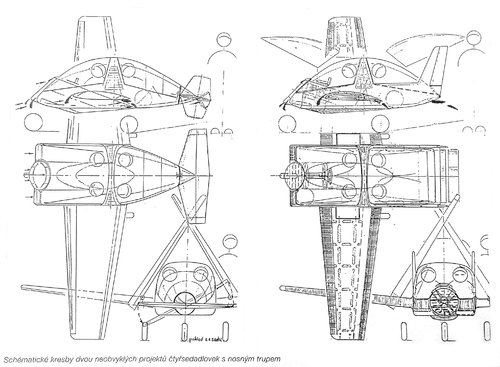 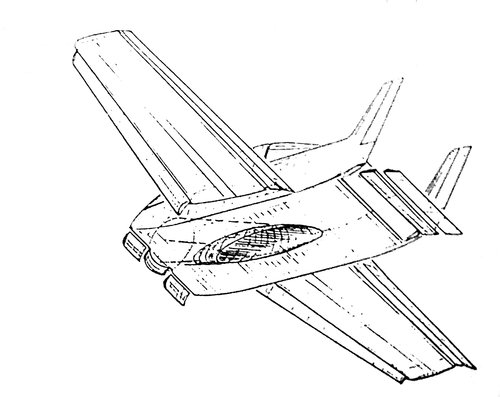 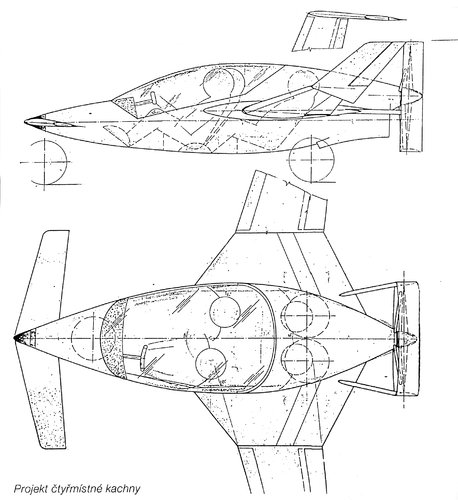 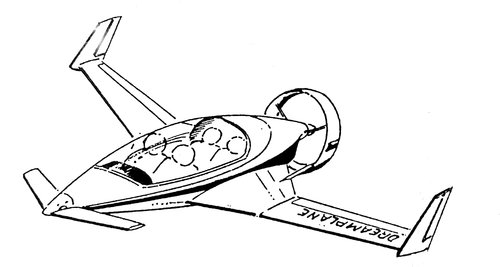 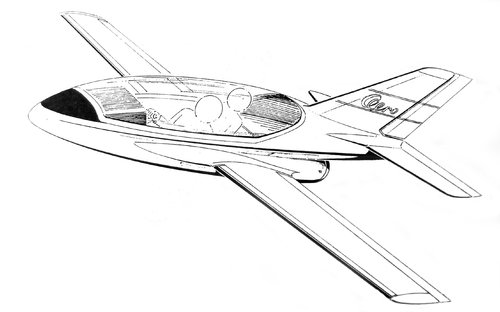 Dear Hesham,
I think that the SK-1 is the only aircraft in your list that was really built. Attached a photo of the Simunek-Kamaryt SK-1 and some details:
The Simunek/Kamaryt SK-1 dates from 1968, when Jan Simunek began to design the Trempik (Little Tramp). Construction started in his apartment in the following year. He was joined by Jaroslav Kamaryt, who assisted with design and stress calculations. In 1975 manufacture was transferred to the Rudy Letov agricultural equipment factory at Prague. The aircraft flew for the first time in October 1979.
The Cub-like machine has a welded steel-tube forward section with a wooden semi-monocoque rear fuselage. Trempik's two-spar wing has a birch plywood leading edge, glass-reinforced plastic wing-tips, wooden ailerons, and a fabric covering. Tailplane and elevator are wooden, and the rudder is fabric-covered light alloy tube.
The 75 h.p. Praga D-1 powerplant drives a two-blade, fixed-pitch propeller taken from a Praga E-117 Air Baby.
SK-1
Wing span: 30ft 6in
Length: 19ft 5.5in
Height: 7ft 53in
Empty weight: 785 lb (356kg)
Max payload: 386 lb (175kg)
MTOW: 1267 lb (575kg)
Max IAS at SL: 116kt/133 mph
Cruise speed SL: 86kt
Stalling speed: 43kt
Service ceiling: 14,775ft (4,500m)
Take-off run: 394ft (120m)
Landing run: 492ft (150m)

Have a nice day

Other machines from the article were just studies made by students under the leadership of aforementioned proffesors Pražák, Ticháček and others.

and many thanks to my dears Walter and Aubi,but I want to ask if this series related to VZLU "L"
sequence as L-03,or not ?.
A

No. L in this case probably means just letadlo, aircraft. Those are not real projects, just case studies and were never meant for production.

Sarastro said:
Mr. Prazak was one of the aircraft designers in Aero Vodochody...
From L+K 1994
Click to expand...

Some info on the Verner W-01 Brouček can be found in a chatty text located at https://ingeniumcanada.org/channel/...ll-airplane-and-a-great-story-the-verner-w-01

Hi,
drawings by Mr. Brskovský from the mid-80s. Mr. Brskovský was a long-term member of the editorial board of the L + k magazine and was also an illustrator. Some of his drawings show his own interpretation of the Aero l-19, the Zlin Z-43 and others...
From: L+K 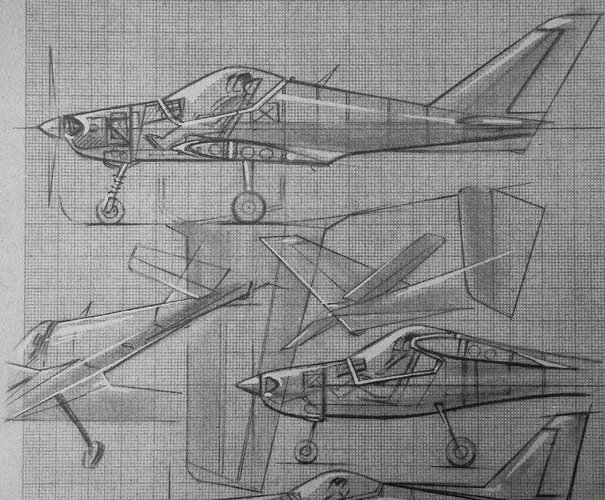 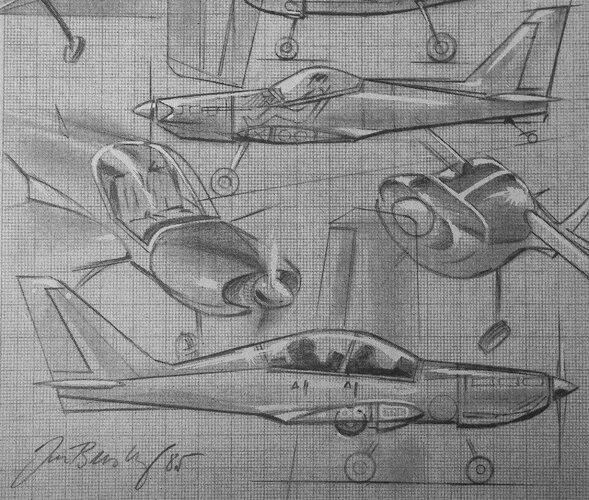 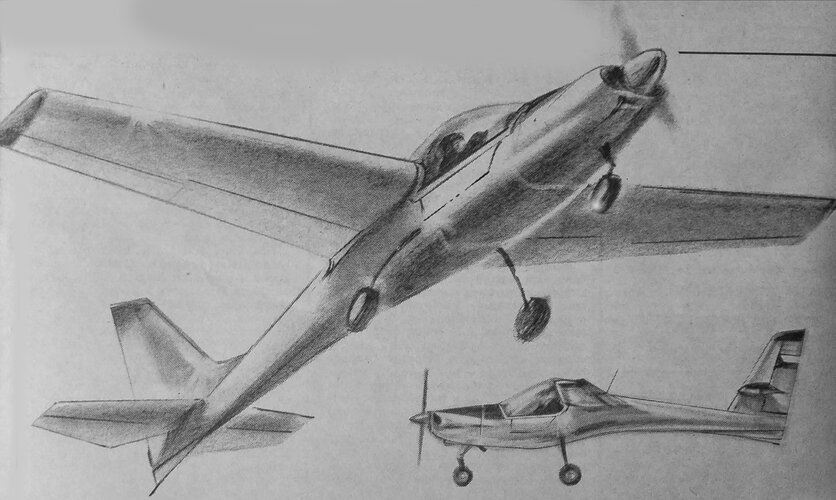 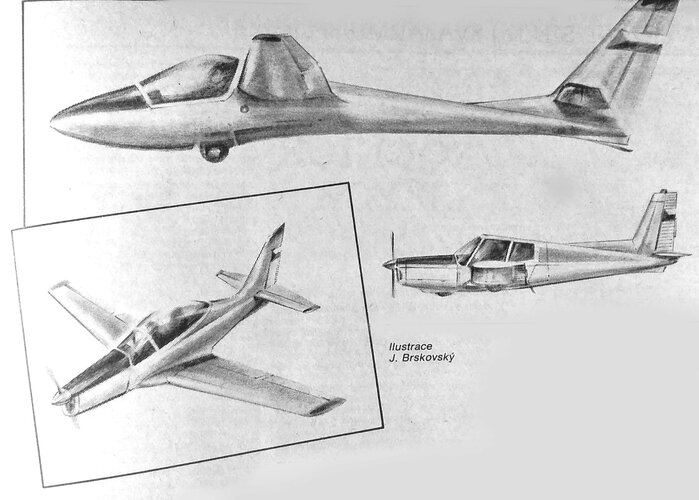 W (PKo) Design Center of the Czech Republic organized an exhibition
of the most successful works from the fifth year of the Good Design
'95 competition at its Prague workplace in Dlouhá třída during the
holiday months. Among the exhibits was this interesting study of a
light sports aircraft, the author of which is Miroslav Novotný from
the Academy of Arts, Architecture and Design in Zlín. 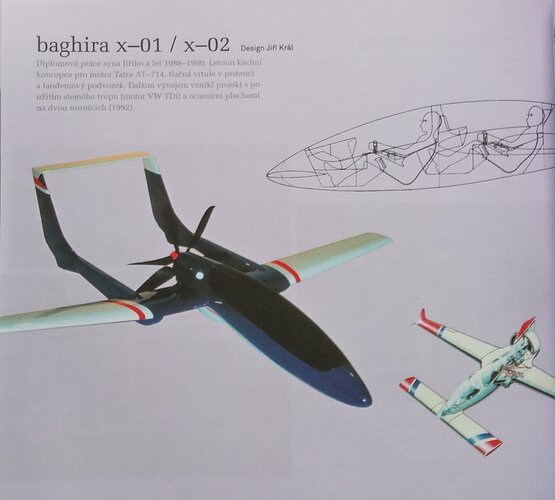 Matějček XM-12 Makrol
Among the really interesting and little-known collection items of the VHÚ is undoubtedly the inconspicuous aircraft of the designer Ing. Jiří Matějček XM-12 Macrol. At the beginning of the 1980s, the military Research Institute VÚ 030 Prague raised the question of how to solve unmanned reconnaissance vehicles for our army. Several solutions were proposed, from which the successful Sojka system later crystallized. Among the so-called dead ends can be included the project of an ultralight, relatively large aircraft, which was to provide the army with basic information about the methods of reconnaissance and unmanned control of such machines.

The above-mentioned Ing. Matějček and the realization was entrusted to Orličan n.p. Choceň, who had extensive experience with the construction of aircraft and at the same time a connection to supplies to the army. And so in 1983, under great secrecy, the construction of a simple aircraft, mostly a wooden structure, began in Orličan. It was subject to the maximum lace and lightness of the machine. A modified engine from the Trabant car and an wooden Aeron V-220 propeller were chosen as the propulsion unit. The construction of two functional prototypes was planned, on which the flight characteristics, installation of equipment and possible remote unmanned control would be verified.

The designer designed the whole machine as simply as possible. The hull was of rectangular cross-section, made mostly of pine beams and plywood. He carried the cockpit with a hinged cover and behind it in tandem the operator's cabin, which was closed on screws by a window plate. In this area, where there was also a cylindrical fuel tank, the installation of reconnaissance equipment and autopilot was planned. Simple rectangular rudders, a wing carrying only ailerons and a solid tubular, unsprung landing gear were attached to the fuselage. Throughout the program, it was calculated, quite reasonably, that Makrol would be flown by a classic pilot, and after removing any defects and vices, he would begin his own military research. The planned empty weight of the whole machine was to be only 140 kg, which was a relatively ambitious assumption.

In Choceň, experienced workers eagerly took on an interesting task, and as early as September 5, 1983, the first functional sample could be flown. Chief pilot Jiří Unzeitig lifted the machine into the air and after two starts he stated that Makrol is behaving quite appropriately, but his performance is far from meeting the expectations. The fault was, on the one hand, the higher empty weight of the aircraft, which reached 185 kg, but above all the low power of the power unit, only 19.7 hp. Unfortunately, the selected power unit, modified in the Aquacentrum in Bubovice and released in Avia, limited the operation of the promising project from the very beginning and was later a practical reason for its cancellation. In the meantime, the Makrol completed several other starts, in particular relatively high vibrations, transmitted to the structure from a low-suspension engine bed.

It was equipped with mechanical brakes of the main chassis for easier maneuvering on the ground. In October 1983, the aircraft became acquainted with the professional technicians of VÚ 030 and its transfer to Prague-Kbel began to be prepared. On October 21, 1983, Mr. Unzeitig flew the Makrol from Chocna to Kbel and covered a distance of 120 km in an amazing 2 hours and 5 minutes. It was the longest and last flight of this machine. After taking over the technology of VÚ 030, Makrol was only motorized on the ground and there was no official flight by the military administration. In the research institute he received the Czechoslovak Army. characters and was assigned military matriculation 5001, which was derived from the serial number 15 00 01. Other fates of Makrol were only sad. In fact, this was the first officially manufactured ultralight aircraft in our country to stand in the VÚ 030 hangar for several years, and after the cancellation of the entire program, it was quietly transferred to the collections of the VHÚ Aviation Museum in 1986. He had flown in only 8 hours and 7 minutes at the time. It was never actually presented to the public properly, and even state emblems were removed from it. Despite all these unfortunate aspects of the fate of Makrol, it is amazing that it has actually survived to this day, and we can thus document the specific development of this category of aircraft. In addition to the relatively unusual name of the machine, it was supposed to be the composition of the names Matějček-Krhánek-Rozlivka. The other two named participated in the project as employees of VÚ 030.

The text of the article is translated from the VHÚ Prague website. Source: L+K and: http://www.vhu.cz/exhibit/matejcek-xm-12-makrol-ceskoslovensko-1983/ 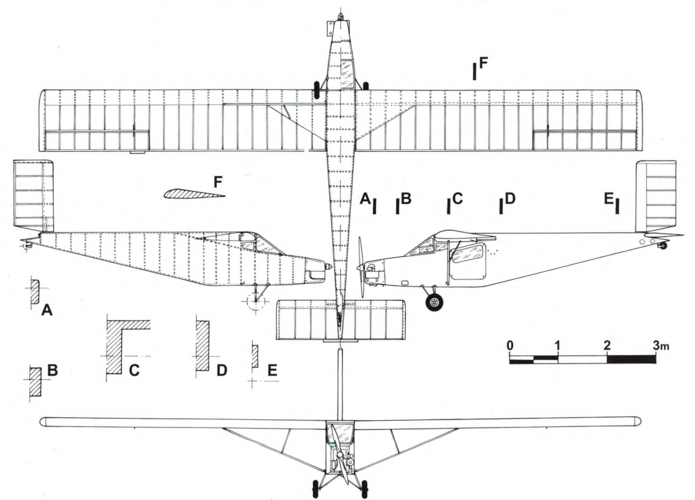 Hi,
For the needs of the representation of the Amateur Aviation Association of the Czech Republic, a single-seat self-supporting mid-plane Junior 2002 was built in 2002, which was based on the proven constructions of the TeST company. The machine was maximally lightened so that its empty weight did not exceed 200 kg and was powered by a reduced Rotax 447 UL engine with a mechanically adjustable Varia propeller. The design had remarkable parameters and the LAA used the aircraft mainly for competitive flying and representation abroad. In competitions with him, the representative of Ing. Jan Lukeš, who also set several world records on the machine in the RAL 1T category. These were the following unsurpassed performances:

After reaching the set resource, Junior ended up in the hangar of the Havlíčkův Brod Aeroclub, from where he was donated by the private owner in 2017 to the VHÚ collection to commemorate the success of our small aircraft manufacturers and the personality of the recently tragically deceased Ing. Jan Lukeš. The aircraft had flown a total of 451.5 hours with 817 takeoffs. 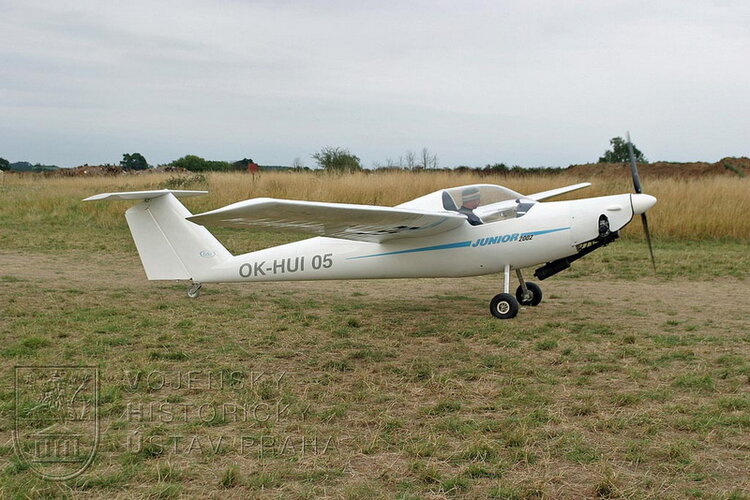 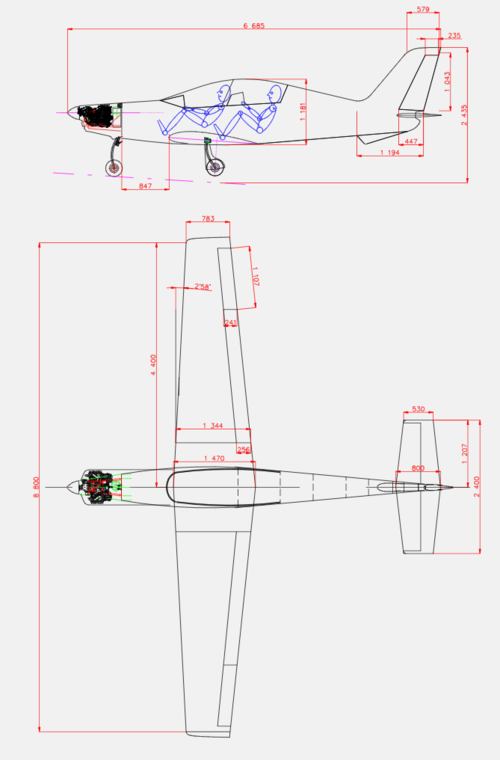 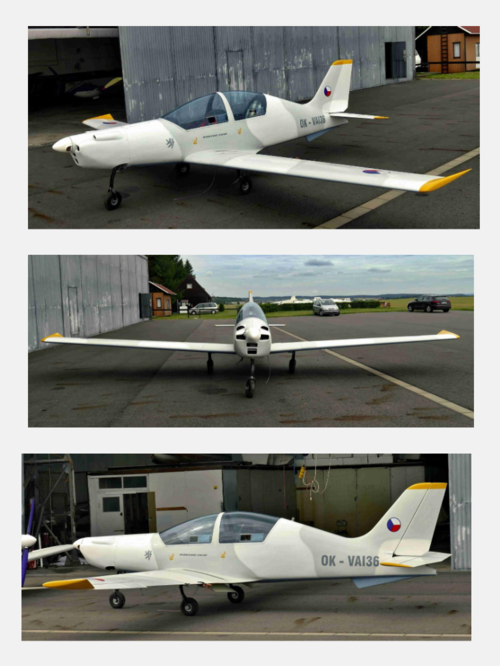