This craft was called "Samoljot", but it had also another name — "wheel orthopter". Its scheme came near to cyclogiro, but it's difficult to classify it precisely. It had three flat surfaces and a rudder; rear edge of one of surfaces could be bent, replacing the action of an elevator. Lift and thrust had to be created by paddle wheels consisting of 12 blades, established in pairs under a 120° angle. The blades of a concave shape were changing an angle of incidence by the means of eccentrics and springs. In a bottom of the craft 10 hp Bushe engine was arranged, from which the belt transmission was running. The three-wheel undercarriage was made droppable and was intended for takeoff only. Fabric-covered framework was made of thin-wall steel tubes and bamboo trunks with steel strings inside. Empty weight was about 200 kg. "Samoljot" was constructed by the military engineer E.P.Sverchkov with the grants of the Main Engineering Agency in St.Petersburg in 1909, was demonstrated at the Newest Inventions Exhibition and won a medal. But the tests have passed unsuccessfully: it not only has not come off ground, but even has not moved from a place.
The famous Russian inventor and scientist, engineer-electrician A.N.Lodygin in 1914 has addressed to Russian government with the project of the cyclogiro-like aircraft, which scheme was similar to Sverchkov's "Samoljot". The project was not carried out.
It is interesting to note, that in 1935 the famous German designer A.Rohrbach has acted with the rather similar cyclogiro project, which was published in aviation magazines.

the story for Medvedev;

A.K.Medvedev has addressed to Military Department with the offer to carry out "paddle wheel". His wheel was consisted of a steel box with four attached blades. The box received rotary movement from the engine and oscillatory movement - from the air pump. The change of an axis movement was made on 1/8 move of a box, and 3/8 move the axis should be in rest, only rotating together with a box. Such a paddle wheel, on an idea of the inventor, had to replace the action of a propeller. The department of the inventions of Military-Industrial Committee, having considered this project, has recognized it "low-practical" and has informed Medvedev, that does not assume to use his offer.

hesham said:
and here is the Strandgren project;

for Mr. John B. Wheatley cyclogyro; 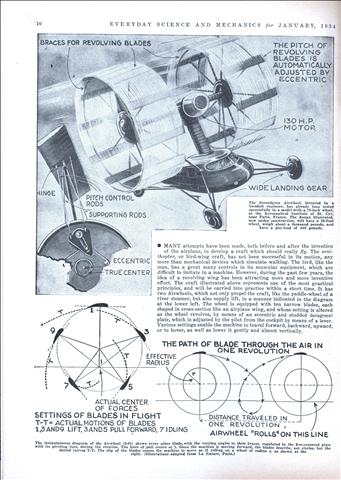 MANY attempts have been made, both before and after the invention of the airplane, to develop a craft which should really fly. The ornithopter, or bird-wing craft, has not been successful in its motion, any more than mechanical devices which simulate walking. The bird, like the man, has a great...
blog.modernmechanix.com
Click to expand...

The name of the designer is still unknown ?.
https://www.reddit.com/r/RetroFuturism/comments/8utwsw
And from L'Air Revue 1939.

A patent from Mr. Caldwell.

hesham said:
The name of the designer is still unknown ?.
Click to expand...

Well Hesham perhaps looking at the caption to the illustration would give you a clue. It says Strandgren Airwheel, and a quick Google search on his name will show you he was Carl Bruno Strandgren. There are several patents in his name.

Thank you my dears Schneiderman and Richard,

here is a paddle-wheels design of 1912,made by French Mr. Alfred Pichou,maybe remained a Project only.

Mr. Laskowitz which we spoke about him before in invention a helicopters,he also designed a cyclogyro
in 1932.

I displayed this Project,and it was a paddle wheel,but I don't know the designer,it was Mr. Gavin,
maybe this one;

hesham said:
a hint for Mr. Irvine cyclogyro of 1910,did we speak
about it here ?.
Click to expand...

here is a paddle-wheels design of 1912,made by French Mr. Alfred Pichou,maybe remained a Project only.

Aerophile 1912
French Airecraft Before The Great War
Click to expand...

For those who know someone with access to Vertiflight Magazine, there is an article in the most recent edition on a US Army Cyclogyro aircraft project.

Lauge said:
.....and if you take one, and stick it in water, it's called a "Voight-Schneider Propeller" (sometimes spelled "Voith-Schneider"):

(Modell of the Schaufelrad-Tragdeckflüglers von Ludwig Rüb at the Zeppelin Museum Friedrichshafen .) 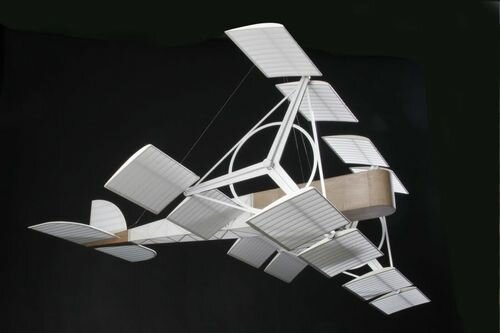 The story , in German , and its English Google traduction :

In addition to working on his aircraft, Rüb was also involved in building a propeller boat that was used to develop efficient propellers for Graf Zeppelin's airships.

With the then very substantial sum of around 30,000 marks, Rüb in Friedrichshafen had used three times more for his flying machine project than he had estimated himself. The construction of a test setup in Manzell, with which he was supposed to prove the feasibility, brought him to the limits of his technical possibilities. Only individual parts of the aircraft were built, the mysterious "Rüb aircraft" was miles away from completion when the collaboration with Graf Zeppelin was terminated on April 4, 1902.

Looking at my files , I have three first names for Herr Rüb : Ludwig , Wilhelm and Otto ...
This "Otto , Ludwig , Wilhelm" could be (probably) the same as Ludwig Rüb who built a big biplane in Ulm in 1911...I keep searching ...

Later , in 1917 , his sons Emil and Ludwig Rudolf built a co-axial helicopter , the Rotoplan II .

In 1922 Ludwig Rudolf Rüb had a patent for an airplane without propeller .
M

strange, as far as I can see no mentioning of the company Cyclotech from Linz, Austria:

Also a Airtaxi concept can be found on the webpage.

Not sure how viable this concept is, but they are working since ~15years on the technology, see history at the website under "company".

he was called Mr. John B. Guest.