I have read the patent in regards to the above aircraft and it is merely an example of how a ducted engine would be used on a single engine type ie it is not a dedicated aircraft as such but merely a sketch of how the engine arrangement could be used. The reason for the engine being mounted on the wing was for safety reasons in the event of a crash. What may be noted on the GA produced in 'Flight' but better seen in the attached patent diagram, is that the wing on which the engine is mounted is thicker and of slightly increased length. It was to be expected, by Theodore Wright (who by the way later became the administrator of the Civil Aeronautics Administration from 1944 to 1948.), that 'The motor may be mounted on brackets which maybe cambered either to the right or wing and the weight thereof is counterbalanced by the increased lift of the larger wing. The offset thrust of the motor is counterbalanced by the'increased drag of the thicker wing and, if desired, by a suitably cambered vertical fin.' For more details please see https://patents.google.com/patent/US1896270A/en?inventor=Theodore+P+Wright&oq=Theodore+P+Wright. As mentioned previously, I attach the GA from the patent document. 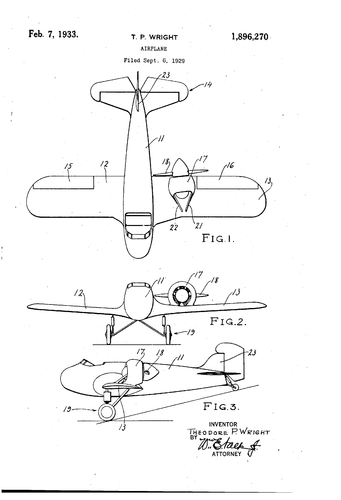 Makes sense.
If the inboard propeller blade rotated down-wards (clockwise as seen from behind) it would minimize assymetric thrust. This helps durinhclimb (high angle of attack but slow) because the descending propeller blade takes a large “bite” of air.
Bloom und Voss’ WW2-vintage 141 used the same principal. B&V solved lateral balance problems with a constant chord wing centre-section and “slid” (on the drawing board) the nacelle and (powered) boom until they balanced.
Share:
Facebook Twitter Reddit Pinterest Tumblr WhatsApp Email Share Link