Not much to see for now.

Did not exactly leap off the ground, would have been nice to see a bit more.

Like with the S-97 Raider, we should say or report "first take-off" instead of "first flight"!
F

Well it did do a bit more. Considering the level of complexity they are putting into the FBW software it isn't too surprising they are being cautious.

Not to mention that the winds were not ideal for conducting a first flight. Given the gusting wind component, I thought the aircraft looked darn stable.

yasotay said:
Not to mention that the winds were not ideal for conducting a first flight. Given the gusting wind component, I thought the aircraft looked darn stable.
Click to expand...

If I had seen the second video before posting I would not have written something that sounded so critical. Seeing more of the flight and now knowing the conditions, I agree it looked quite solid.
S

Still find it an incredibly ugly machine, but I thought the photo was cool and I like the unusual color too.

Skyblazer said:
Still find it an incredibly ugly machine, but I thought the photo was cool and I like the unusual color too.
Click to expand...

Practicality overcomes style, when designing a bus. Doubt the folks with the checkbook wanted to drop an extra $100K or more for style.

Besides sexy aero is for the Europeans. B)
L

Meh, too big for an Airwolf reboot!
F

A little end of year reminder from Bell that they are still working on the 525.

A new video with aerial shots this time. Seems like they are moving along fast enough for customer deliveries in 2017 (assuming software doesn't bite them).

The second Bell 525 Relentless helicopter first took to the sky on December 23,2015.

Here are my photos of Flight Test Vehicle 2 from HAI 2016 a month ago in Louisville,

This is likely to severely affect the program.
F

The article at the link says the helicopter was traveling at 199kts. Is it normal for a conventional helicopter to be flown this fast even in a dive?

Flightradar24 data isn't gospel. It's just looking at Extended Mode S transponder data and trying to interpolate; sometimes it makes very wrong guesses, especially in unusual cases like accidents. I wouldn't read too much into it.

So like the 609 incident in Italy, I suspect software issues at "extreme" points in the flight envelope. Those areas where the computational work might not be as solid as the middle of the envelope. Of course it is easy for me to say that because they tout 525 as the first fly by wire. Some will recall that the UH-60 had fly by wire issues (stabilator) early in its life.

Ultimately, what matters is that there are families who have had the world pulled from under them. Prayers for them.

Today, a year and a day after the fatal crash of its first prototype, Bell Helicopter resumed the flight test program of its model 525 Relentless super-medium twin after receiving experimental certificate renewal from the FAA.

“Today we have resumed a key element of the Bell 525 program,” said Bell CEO Mitch Snyder. “Bell Helicopter has worked with the National Transportation Safety Board and FAA since the accident and we are confident in the resumption of flight test activity.” Snyder said Bell remains on track to certify the 525 in 2018. The 525 features fly-by-wire flight controls and the Garmin G5000H touchscreen-controlled avionics system. The flight test program had been stood down since the fatal crash of 525 flight test vehicle 1 (FTV-1) last July 6th.

Neither of the remaining two test aircraft had engaged in ground runs during the standdown. Two more test aircraft are being built at Bell's plant in Amarillo, Texas. One of those new aircraft is expected to fly this year and the other early next year.

The NTSB has yet to issue its final report on the FTV-1 accident. That aircraft was conducting tests near Vne speeds when the main rotor rpm dropped off and the main rotors departed the normal rotation plane and struck both the tailboom and the nose during the in-flight break-up sequence that destroyed the helicopter, according to the NTSB. A Bell executive told AIN last year that the company was making unspecified modifications to the remaining test aircraft in the wake of the accident.

Wears the colors well. Though I have no idea how interested military buyers would be, other "super mediums" like AW189 and H175 haven't really cracked that market much.
T

With an industry contract to support and sustain a contracted number of rotations worldwide.

Always good to hedge your bets when dealing with the U.S. Army on new aircraft.

Then there is the "Can't afford a swoopy high-speed rotorcraft? Well we got you covered."

Given that Bell had their civil partners work with them on criticality of reduced maintenance cost, as already mentioned it might provide a good financial proposition.
F

They have several flying now. Think the FBW final testing is what is dragging the program. FAA is likely a bit skiddissh on that these days.
F

Just got in from Anaheim so here are my photos from Heli Expo 2020 of N525TY at the Bell booth and on departures. 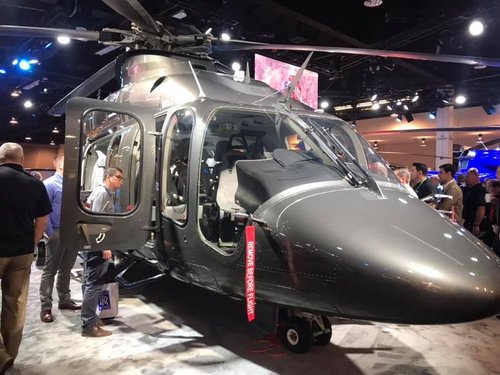 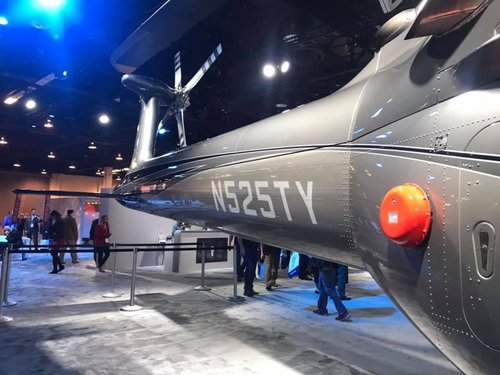 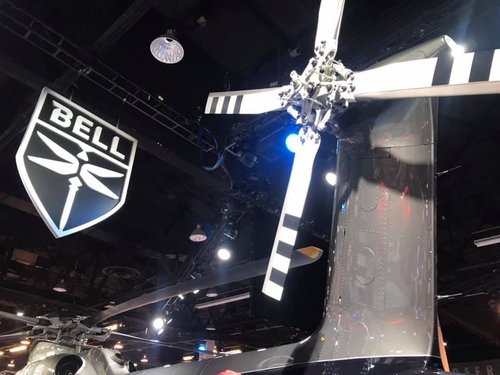 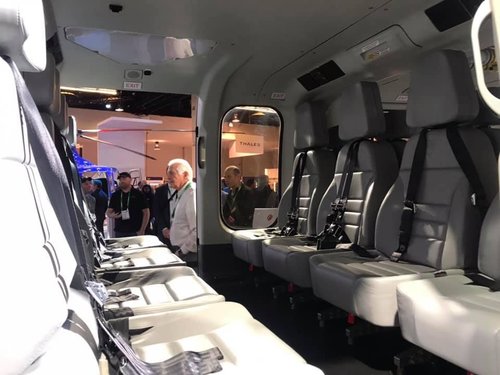 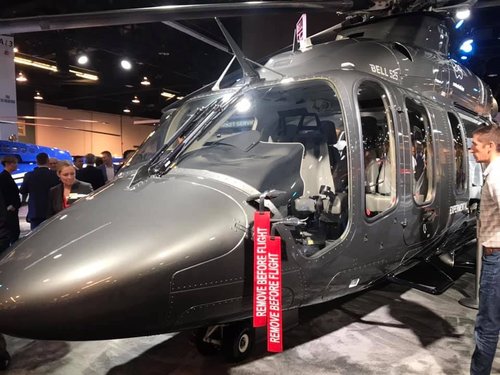 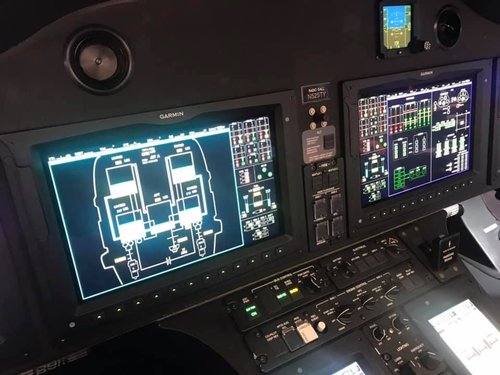 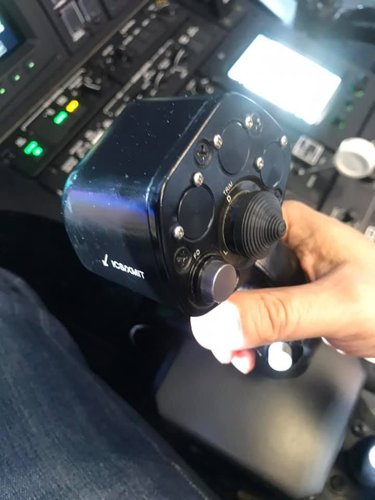 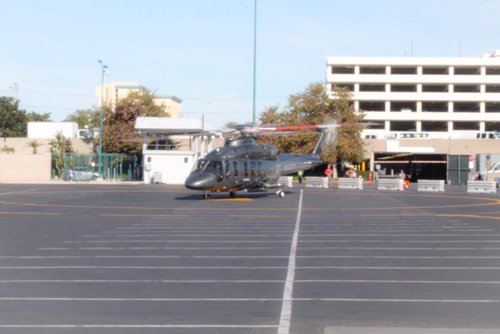 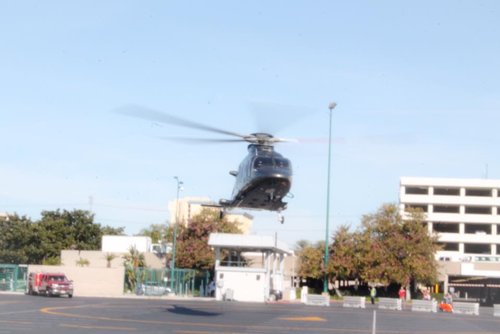 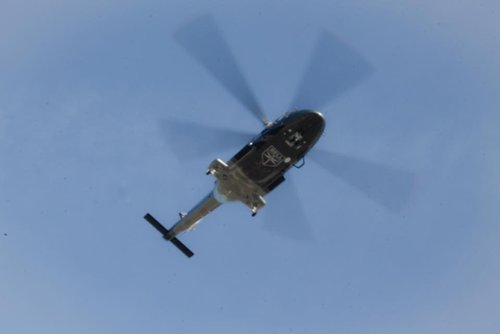 Didn't want to create a new thread for this so I am putting it here. This is an interesting application of distributed electric propulsion to replace the tail rotor. It is a more conservative approach than the "FCX" design where the fans ducted air through the boom.

Fascinating. Not the sexiest tailboom ever, but a lot of potential. I wonder if it's just a testbed for a new design with electric propulsors, or if they're thinking about making it an upgrade/update for their existing types.

...and I may add: Replacing the mechanical drivetrain with an electric propulsion system may appear simple on the first look. But one should not underestimate the complexity of a system designed to be "single fault tolerant" - And that's the whole point of it.
F

Regarding the "EDAT" (electric distributed anti torque) system, it does seem to have some production potential.

Bell is not ready to share any performance figures, but Sinusas said the feedback from the customers that have seen the system in action has been positive....

“We were looking at what are the customers demanding for aircraft? . . . And safety is obviously always at the top of the list,” he said. “This [system] certainly meets those [requirements] and it has some interesting features that conventional rotors don’t with redundancy, and when the aircraft on the ground, the electric fans are not rotating at all.”
Click to expand...

Notice also that by having four widely spaced rotor position, they can govern the anti torque vector direction, improving stability in a range of speed (instead of a single speed value - usually cruise) and decreasing losses of power in trim.
You must log in or register to reply here.
Share:
Facebook Twitter Reddit Pinterest Tumblr WhatsApp Email Link
Top