The third issue of The American Aerospace Archive is now available: 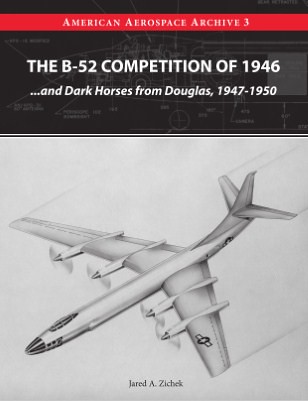 In this issue, we examine proposals submitted to the Army Air Force heavy bombardment competition of 1946, which ultimately yielded the legendary Boeing B-52. Though Boeing won the initial competition, it struggled to keep the contract as changing Air Force requirements and rival companies put intense pressure on the program. One of its most aggressive competitors was Douglas Aircraft, which submitted scores of strategic bomber studies from 1947-50 in an effort to reopen the contract to competition. The magazine covers the following studies:

Notable Model 1211 configurations include the Model 1211-J “mother ship,” which was designed to carry photo reconnaissance versions of the Douglas X-3 Stiletto and the XF4D-1 Skyray; the Model 1211-J missile carrier, which featured a large air-to-surface missile mounted on top of the fuselage (possible an early version of the NAA Navaho); and the Model 1211T-55, a truly giant aircraft with a span of 262′ and a length of 207′ 2″. This 60 page magazine features 77 illustrations, photos and artist’s impressions, the majority published here for the first time. It is printed in full color on high quality 80 lb semi-gloss paper with saddle-stitched covers.

For a full preview of the magazine, please visit MagCloud. The magazine, which is almost twice as thick as the last two, is priced at a reasonable $14.95. US, UK and Canadian customers should order the magazine directly through MagCloud.

Yes, you were absolutely right, robunos. I hesitated to update the issue till I had solid documentary confirmation from the Douglas report on the Model 1211R-45 through 1211X-55 studies, (a full summary of which can be found on pp. 17-21 of "Mother Ships, Parasites and More..."). I'm still not 100% certain of which exact engines were used for the early Model 1211 studies; the nacelle contours changed as the series evolved, which may imply changes in power plants. Hopefully concrete info will eventually emerge.

Well, I have 'Motherships' downloaded as well, looking forward to reading it in due course...

On (1), could this have been an attempt to deal with CG bombload issues? It would seem that altering the power for the inner, upward-inclined engines could add extra pitch control.

On (1), could this have been an attempt to deal with CG bombload issues? It would seem that altering the power for the inner, upward-inclined engines could add extra pitch control.
Click to expand...

HmHmHm.......Thanks a lot. I confirm that engine is liquid cooling turbocharged R-7755 by Jared-san's book.