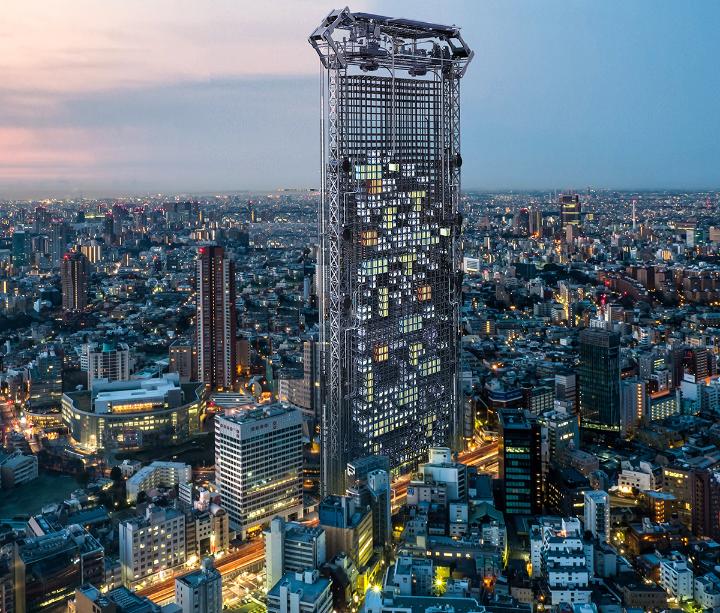 I think the need to resist large earthquakes will nix that plan - aside from the bracing needs, the need to balance the loads tightly will mess with operational plan.

3D printed excavator. They don't include engine, tracks, and hydraulics so it's a bit overhyped.

Another wrinkle in 3D metal printing.

Interesting talk by Markforged 3D Printing about mass production. They use a printing technique where metal parts go through a standard sintering post processing technique used for metal injection molding which is already in wide scale use.

Cold spraying has been around for some time and is being used both to manufacture and to repair parts.
F

Mass production metal printing. Technique is similar to Markforged but engineered for high volume throughput. This company has some big name capital backing.

Ultrasonic welding for 3D printing. Heat stays below 200 deg F so they do things like embedding fiber optics and electronics into the part. Also, they can make parts using dissimilar metals.

Interesting presentation from Desktop Metal on how their “nature based” part design software works. The idea is to take advantage of 3D printing to build parts optimized for function without regard to machine tool constraints. This creates bone like designs that look organic.

sferrin said:
What a waste of tax dollars. AR-15 receiver cad files have been online, all over the damn place, for years.
Click to expand...

Boxman said:
As long as the apparatchiks at the State Department deem it so, maybe the federal courts in their infinite wisdom will next recognize the danger in exporting the CAD designs for the wheel?

As stated, this information has been widely available all over the globe (electronically) for at least a decade or more. The genie is out of the bottle.

The dissenting judge lays it out quite well and her full dissent is worth reading. This is yet another attempt by the Obama Administration (and its political allies) to harm domestic firearms makers, designers, and hobbyists by restricting the sharing of information that is otherwise legal.

As an attorney who has taken an oath to support the United States Constitution, the 5th Circuit's opinion is beyond chilling.
Click to expand...

This matter has now been resolved and common sense prevails.

https://reason.com/volokh/2018/07/10/us-government-drops-prohibition-on-files
US government drops prohibition on files for 3D printed arms
State and Defense Departments comply with revised regulations from May 2018.
by David Kopel - Jul. 10, 2018 4:41 pm

Last week the U.S. Department of Defense and U.S. Department of State settled a lawsuit and agreed to end their prior restraint of distribution of computer files for the production of 3D printed firearms. . . .
. . .
in May 2018, the Trump administration proposed revising revise the ITAR regulations. The move for regulatory reform actually began under the Obama administration, but the proposed reforms were never published. Now they have been. Export controls for many ordinary firearms and accessories will be removed from the ITAR list. Exports of such items will instead by controlled by the Department of Commerce. Among the items remaining under the ITAR system are automatic firearms, firearms of greater than .50 caliber, magazines with more than 50 rounds, and sound moderators (a/k/a "silencers"). Non-automatic firearms of.50 caliber or less will no longer be covered under ITAR; among the firearms no longer under ITAR is the semiautomatic AR-15 rifle, the most common rifle in American history. Its typical calibers are .223 and .308--well under the new .50+ caliber rule.

Accordingly, the government defendants revisited the Defense Distributed case. If a particular arm (e.g., the AR-15) is no longer part of ITAR, then it would be illogical for ITAR to be applied to instructions for making the arm. Under today's settlement agreement, plaintiffs and others may freely publish 3D printing instructions for firearms that are not covered under ITAR. Restrictions on distribution of 3D printing information for items that are still under ITAR, such as machine guns or rifles over .50 caliber, remain in place.
Click to expand...

fredymac said:
Interesting presentation from Desktop Metal on how their “nature based” part design software works. The idea is to take advantage of 3D printing to build parts optimized for function without regard to machine tool constraints. This creates bone like designs that look organic.

This is the coolest thing I've seen!

PARIS, 20 July 2018 (ESA PR) — A new ESA-led project is investigating the ways that 3D printing could be used to create and run a habitat on the Moon. Everything from building materials to solar panels, equipment and tools to clothes, even nutrients and food ingredients can potentially be 3D printed. But if you were headed to the Moon, what would you want to 3D print, to turn a lunar base into a place that feels like home? Tell us your idea, to win a chance of actually getting it printed.

Global space agencies are focused on the concept of a lunar base as the next step in human space exploration – and 3D printing represents a key technology for making it happen.

The aim would be to ‘live off the land’ as much as possible, by printing as many structures, items and spares out of lunar regolith as possible, or by using and reusing materials brought for the mission, rather than continuously relying on the long, expensive supply line from Earth.

Maximised 3D printing would also allow on-demand production of items and spares with routine recycling of materials available within the base, making lunar settlement much more self-sufficient and sustainable.
Click to expand...

Screen grab from a Stratasys ad. Any guesses? The rear model has an Aurora logo but I'm not sure if that refers to Aurora Flight Sciences.

On the flying wing model there appears to be some small Air Force insignias which may indicate this could represent a fairly large aircraft.

fredymac said:
Screen grab from a Stratasys ad. Any guesses? The rear model has an Aurora logo but I'm not sure if that refers to Aurora Flight Sciences.
Click to expand...

The rear model looks to be the Aurora Flight Sciences Goldeneye or a development thereof, without the main wings attached.

A take on 3D printing's impact on future industry which I think overstates the case. "Customers" of 3D printing are more likely to be other companies and not individuals. Surface finishing and integration/assembly of parts to create a finished product incorporating electrical/electronic and other components will still require traditional methods.

3D printed heart. They take a biopsy of the heart and then transform the cells to adult stem cells to create the various types needed in the different structures of the heart.

I was surprised when they mentioned how many people died while waiting for donor replacement hearts. I thought artificial hearts had reached a point of maturity and availability to reduce this problem.