Do you have more info about SUPERMARINE TYPE 179 flying boat?
Thanks.
P

Not a secret project but a cancelled project..

Does anyone have any information on this 6-engined, monoplane flying boat of 75,000lb cancelled in 1932?

in Flightglobal site,there is an artist picture to Supermarine six-engned
flying boat of 1930,who have more info about it?,and for which Spec. it
was designed ?.
http://www.flightglobal.com/PDFArchive/View/1953/1953%20-%201313.html

This would be the Supermarine Type 179 powered by 6 supercharged Rolls-Royce Buzzards giving 1030hp.
L

Correct.The original sheme for the Supermarine type 179 'Giant' used 6
Bristol Jupiter engines in tandem rows and had provision
for passenger cabins within the wings.

An artist drawing to Model-179.
http://forum.keypublishing.com/showthread.php?t=86503&page=3

Before cancellation, the registration G-ABLE was allocated.

From a (fantastic) online presentation on the SARO Princess comes this nice slide.

Just remembered I had this from Solent Sky aviation museum in Southampton.

This seems very close to the Short Sarafand, especially the proposed monoplane version- even down to the power plant (6 x RR Buzzard), was there some sort of official requirement for a civil flying boat in this class?

No hesham, the source was as I said. I wasn't aware of your topic.

...was there some sort of official requirement for a civil flying boat in this class?
Click to expand...

The short answer to that: yes.

A slightly longer answer: according to Bill Gunston in 'Giants of the sky', Oswald Short saw the Do X and thought his company could make an aircraft at two-thirds of the weight with comparable load/range performance. Next, he convinced the government to pay for such an aircraft. Specification R.6/28, which asked for a large reconnaissance aircraft, was written around what was to become the Short Sarafand. The specification was issued to other manufacturers as well, one of them being Supermarine, who designed their type 179. Short received a contract for a reconnaissance aircraft, Supermarine received a contract for a passenger aircraft. Short built and flew one S.14 Sarafand. Supermarine never finished their single type 179; it was cancelled before completion.

Thanks Arjen, that also explains why Shorts never even started a monoplane Sarafand.

Bill Gunston has lots to say about government procurement policies of the day. All of it is bad, and amusing.

Please allow me to clarify the story regarding the Type 179.

Supermarine drew up a six-engine (probably RR Buzzard) monoplane, Type D in Supermarine's old project naming system, to spec. R.6/28 but this was not ordered by the Air Ministry.

The design was enlarged and modified as a civil flying boat, Type 179, powered by six Bristol Jupiters (see posts #5 and #6). One example was ordered by the Ministry to spec 20/28, but with the engines changed back to RR Buzzards (see posts #2 and #9).

The aircraft was then redesigned completely in 1930-1931; most noticeably the elliptical wing was dropped in favour of straight-tapered and eventually the three twin-engine nacelles became two twin-engine and two single engine (see posts #6 and #8)
S

Thanks a lot Schneiderman for these most valuable explanations.

Its surprising how many aircraft were drawn with elliptical wings in the early stages of design only for this to be dropped in favour of a simpler style later. The lift/drag benefits were not always worth the additional construction costs.
P

Engines on top of the wings....is that a hangover from biplane seaplanes where they were between the wings?

Could they have been on the wing leading edge in an aircraft of this size?

It is a question of separation between the prop blades and the water, methink.
You want to maximize it, especially when the sea state is rough.
P

Any suggestions as to how big a market there would be for an aircraft of this type?

One other reason for not placing the engines on the leading edge was that this was utilised as a condenser for the evaporative cooling system. A further would be that three engines each side places the outer-engines a long way out.

The market for very large flying boats at this point was essentially zero. There was no production order for the Short Sarafand and Dornier's DoX, 3 built, never entered commercial service. 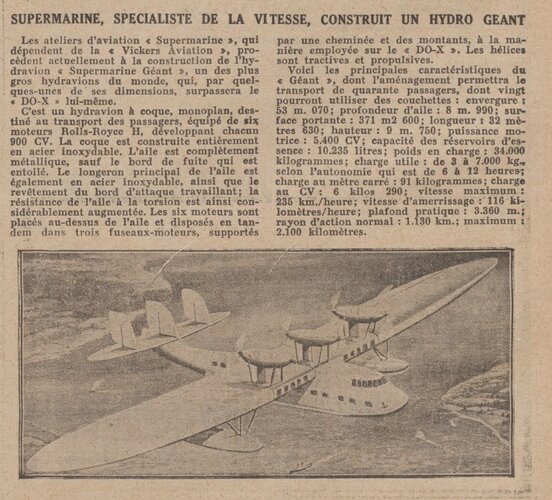 This is Supermarine's project to R.6/28 and a series of advertising artwork that shows how the commercial flying boat evolved from 1928 to 1932 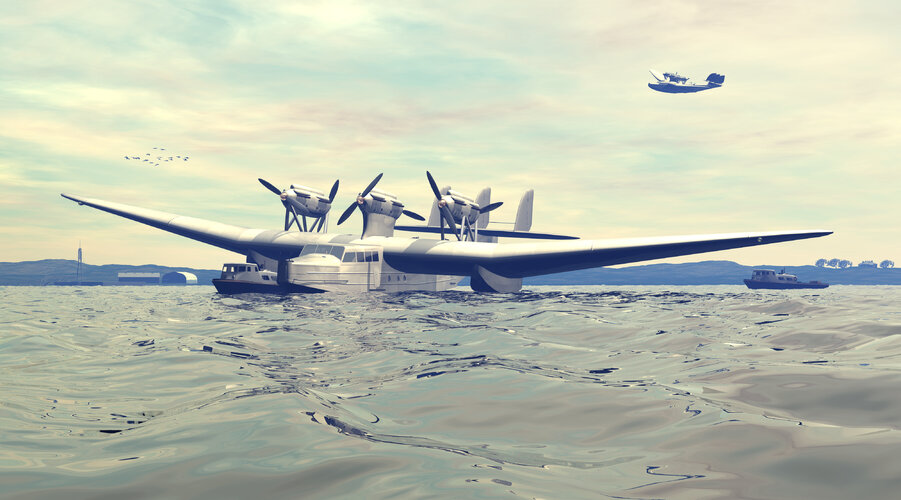