I have half a story to tell and hope that someone on the forum can provide the other part.

Vickers Aviation had a licence agreement with Wibault to build their aircraft in the UK and to exploit their metal fabrication patents. At the end of 1928 Vickers acquired Supermarine Aircraft. In early 1930 Supermarine must have been requested to contribute to a proposed Wibault flying boat, it is not clear whether this was to design a hull, aid Wibault to design one, or to comment on Wibault’s work. I have seen four Supermarine blueprints titled Wibault Flying Boat.

So from 1930 Wibault were investigating designs for a very large flying boat in the DoX/Supermarine 'Giant' class. Can anyone fill in the gaps in the story from the French side?

OK, no answers yet.
I suspect that the initial designs, with what look like 4 Hispano Suiza 18Sb engines, may be related to the same spec as the Latecoere 520. Does that make sense?

Maybe you are right my dear Schneiderman,

but for Latecoere 520,it was appeared in 1930 and the program still under development
until 1932,just wait TU magazine,in during two months they will reach to "W" letter in
aircraft designations.

Sure, we could wait. On the other hand the author may not know of these projects and be grateful for the information. Perhaps he reads this forum (he should)

I think the person that could help you is Gerard Bousquet, he is the specialist concerning inter-war french flyingboats. His last book : Les Paquebots volants : Les hydravions transocéaniques français - Editions Lariviere. He is also the author of several articles on the same subject, published in le Fana. I did some drawings illustrating these , that was years ago, have no way to contact him.
But maybe via Le Fana ?

Thanks, its worth a try

Schneiderman said:
Thanks, its worth a try
Click to expand...

and for my dear Schneiderman,I have all issues from Le Fana,from No.1 to No.586,just
tell me what was them ?.

please do you have a drawings to them ?.

Do you have this magazine now, and if so was there any mention of Wibault flying boats? Thanks

Schneiderman said:
Do you have this magazine now, and if so was there any mention of Wibault flying boats? Thanks
Click to expand...

No my dear Schneiderman,

These are the flying boat designs I mentioned. They are in order of design date, oldest at the top. Top one is dated 1930, the others are slightly later, probably 1931. The last two have Wibault project/drawing numbers. 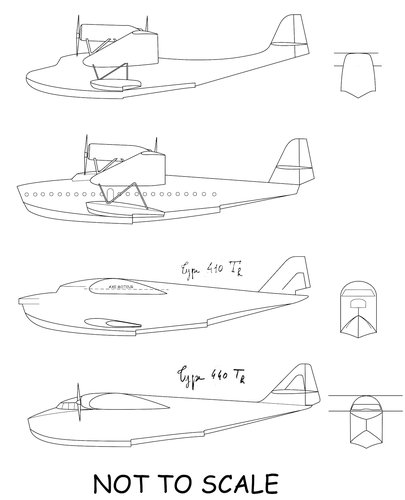 No, nothing published. We need to find an expert in Wibault design projects

In this month,the TU magazine will spoke about Wibault as I think,but I hope they will find those
designs ?.

unfortunately,the TU magazine ended the articles about Wibault without mention anything
about those great stuff ?!.

Hi Hesham. That's a bit disappointing but at least it means I have found some genuine unknown projects

Of course my dear,you got a treasure,