Can anyone help with this?

Are you referring to USAAC Type Specification XC-622 / Circular Proposal / Request for Data R-40C? If so, I have a list of sorts (a bit incomplete, unfortunately) here.

A lot of confusion exists over the terms "Circular Proposal", "Design Specification" and "Request for Data".

Details of these specifications then appeared in the form of "Circular Proposals", the designations of which were built as follows: "CP ¤¤-***", where ¤¤ corresponds to the year (fiscal year, not necessarily the year of issue) and *** the order in which each year's projects were issued.
Many other Circular Proposals were about equipments and did not concern aircraft. It seems that the Circular Proposal system was replaced by the MX- series circa 1943. In the case of XC-218, for instance, each separate proposal that was granted a contract received a separate MX- designation:
Anyone who can shed some light on the subject and add to the lists is very much welcome to!!
N


These specifications only pursuit/fighter programmes
S

Makes sense indeed. Thanks for spotting that mistake!
S

An addition provided by ACResearcher in the Martin 145 thread:

At last I'm able to present a decent list of design specificationsin the previously called "X/XC-..." list, which ran from about 1935 to at least the end of World War II.

I haven't yet been able to work out the meaning of the prefixes, but I suspect they may have to do with either what Army entity drafted the specification, or on what budget... Suffixes vary according to the year (-4/-4A/-4B usually refer to the same aircraft type or a close variant).

Finally, there MUST have been a "Series 800", but I haven't been able to find any reference to it yet.

Of course, the list is not complete, so I'm open to any additions or suggestions!

Fantastic - now you can add this one too from my new Mustang book. The Consolidated XP-33 came from this. -SP

At last I'm able to present a decent list of design specificationsin the previously called "X/XC-..." list, which ran from about 1935 to at least the end of World War II.
Click to expand...

This kind of reminds me a little bit of the later WS designation scheme, and the RAF's scheme in that the year was listed the date of the specification. I'm curious if anybody knows why they organized 100's as attack planes, and fighters as 600's and stuff?

I know Cold-War the WS-concepts definitely reflected the USAF's priority on things (100 for bombers since that mattered the most to them, 200 seemed to be for fighters/fighter-interceptors and interceptors protected the country from enemy attack...)

Fantastic - now you can add this one too from my new Mustang book.
Click to expand...

That's a really beautiful design and I'll put that on my Christmas list...
S

KJ_Lesnick said:
This kind of reminds me a little bit of the later WS designation scheme, and the RAF's scheme in that the year was listed the date of the specification. I'm curious if anybody knows why they organized 100's as attack planes, and fighters as 600's and stuff?
Click to expand...

Hi KJ, I am not sure of course, but if you look at the list, you'll see that it more or less follows the alphabetical order (A for Attack, B for Bomber, C for Cargo, O for Observation, P for Pursuit, T for trainer). Only exception is the photo reconnaissance mission (between O and P) and the BC mission which is last because that mission didn't exist when the system was invented.
K

As I was looking for a place to add U.S. Army Air Corps Specification R-1800-D in my files, I happened on a list which I started many years ago, working from many different sources (books, mostly) and had completely forgotten about. Unless I'm mistaken, I don't think I've ever shared it before on this forum, nor have I ever seen its equivalent anywhere on the web (if I'm wrong by all means please let me know).

I've compiled it for you in PDF form and I hope it will be of interest to some of you.

Also, I'm adding a second PDF with the list of Draft Specifications that I already shared previously in this topic, and a third one with Circular Proposals.
When new allocations emerge, I will update the PDF files accordingly.

Unfortunately I still don't have a list for Requests for Proposal such as the late Steve Pace was asking for in the initial post of this thread.

and I can add;

Thanks. I've added these to my spreadsheet and will eventually update the PDF.
I realize I made a mistake about the Stearman in CP 39-640, which was NOT the XA-21.

Are you quite sure about the Martin 177 being submitted along with the Model 167? I haven't found a reference for this.
(I don't use the M- prefix for Martin, as the company itself didn't seem to use it)

Also Lockheed Model-29A was involved.
A

Thanks! Pdf was super helpful stargazer20066!

Just out of curiosity, on the first spreadsheet, there are a number of the specifications for types ordered under USAAS, prior to the change in titles. However I do not find anything in there like the Circular E-265 which is mentioned in the below document, which was posted by ACResearcher in connection with NBL AAS bomber program of 1926. Where would I find a list of these Circulars? 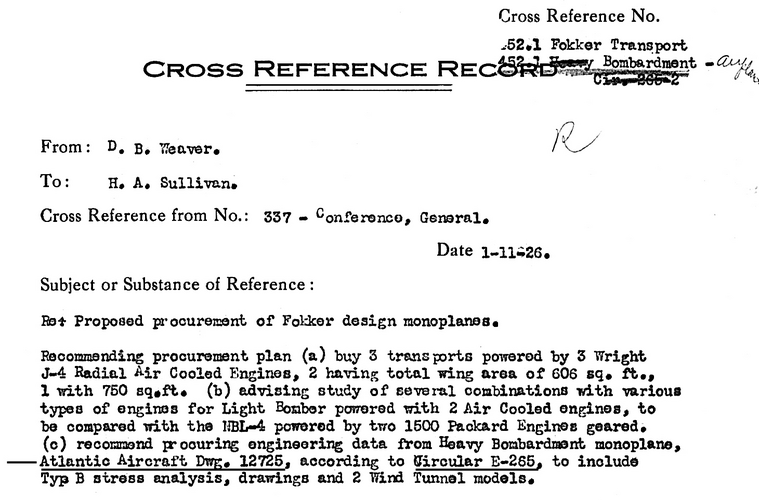