Any ideas? From Facebook. Aircraft seems to have a Phantom style tail. Missile has IR seeker, and its just shot down a MiG-21. Missile is probably the focus here.

Kinda looks like a cross between a North American Rockwell FX and Vigilante.

Purely a guess - AIM-82, Hughes design. Wing and tail are quite Phoenix or Maverick. A lot depends how big that host aircraft is.
S

Slightly enhanced for your viewing pleasure:

Looking at the Salamander "Illustrated Encyclopedia of the World's Rockets&Missiles page 231:

My vote goes to an AIM-82A proposal

The F-15 mockup had an AIM-82 that was different but also was carried tandem on fuselage. My guess - this is Philco-Ford. The third competitor was General Dynamics and all three submitted designs in 1970.

Looking at the scale though it looks too big to be AIM-82. 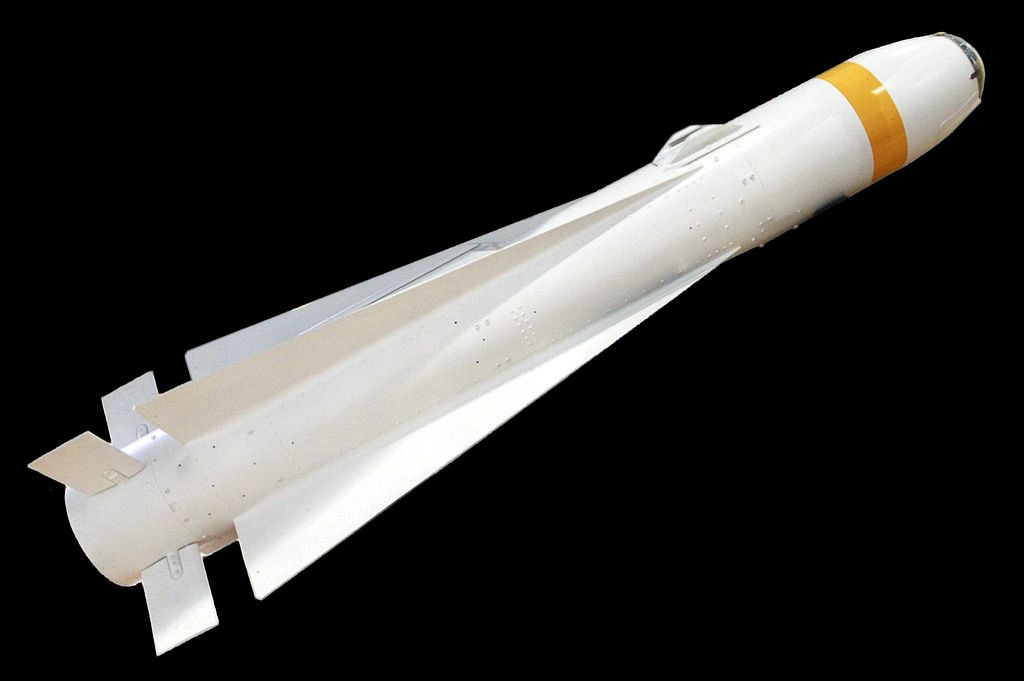 pometablava said:
My vote goes to an AIM-82A proposal
Click to expand...

The aircraft design is unknown.


It does look rather like the AGM-53 Condor doesn't it? Not identical though. Could be North American Rockwell for both aircraft and missile, or the aircraft could be a generic "advanced fighter" with a bit of Rockwell FX in the inlet.

From an old document on DTIC:

The Navy AGILE and the Air Force CLAW

In the years immediately preceding the Congressional budget review
for FY 75, the Navy had been engaged in subsystem development and testing
of a sophisticated dogfight AAM which they named AGILE. The AGILE, in the
Air Force viewpoint prevailing during those years, would have operational
parameters far in excess of Air Force requirements. This missile, with
thrust vector control and a highly capable guidance and control system,
would be able to attain “kills” well past the point 90 degrees to the left
or right of the launch aircraft’s heading. This seems quite desirable from
a Naval fleet defense standpoint, but it would make Air Force wingmen a
rare commodity, considering current tactical doctrine. It was considered
too much bang for too many bucks and, therefore, Air Force requirements
people initiated a search for an alternative.

The Concept for a Low—Cost Air—to—Air Missile (CLAW) was initiated
within the Pentagon where considerable studies were made or contracted
for, to investigate the conceptual feasibility of a dogfight missile less
capable and less costly than AGILE. Having seen both sides of the argument
during that period , this writer remains unconvinced that CLAW, as it
was to be developed, would have succeeded; but the discussion is academic
for neither AGILE nor CLAW survived Congressional scrutiny during that
Fall of 1974.

As the two Services presented testimony for MN developments to the
Senate Subcommittee on Tactical Air Power, they were brought up shor t on
the issue of AGILE versus CLAW. Upon completion of their two presentations ,
they were asked to explain their divergence. Congress wanted to know why
the Air Force and Navy were going off in totally different directions with
CLAW and AGILE. It was painfully brought to the Services ’ attention that
both use the same kind of airplanes and are both going to be shooting at a
common enemy. (4:4722) In the words of Senator Nunn,

Regarding the short range dogfight missiles, we are
seeing a situation where there appears to be a tendency
for proliferation of different types of missiles to do
much the same job, which is to shoot down an enemy airplane
in close—in combat. (4:4653)
Click to expand...


It does look rather like the AGM-53 Condor doesn't it? Not identical though. Could be North American Rockwell for both aircraft and missile, or the aircraft could be a generic "advanced fighter" with a bit of Rockwell FX in the inlet.
Click to expand...

Looks to me like a take-off on the sparrow. The tail fins are different and of course it has an IR seeker but the fuses on the body look like those on the sparrow. Seems to have the same proportions. Then again it could be a slim version of a terrier/standard missile with an IR seeker.

To me it looks like one of the contenders for what became the F-108 interceptor.