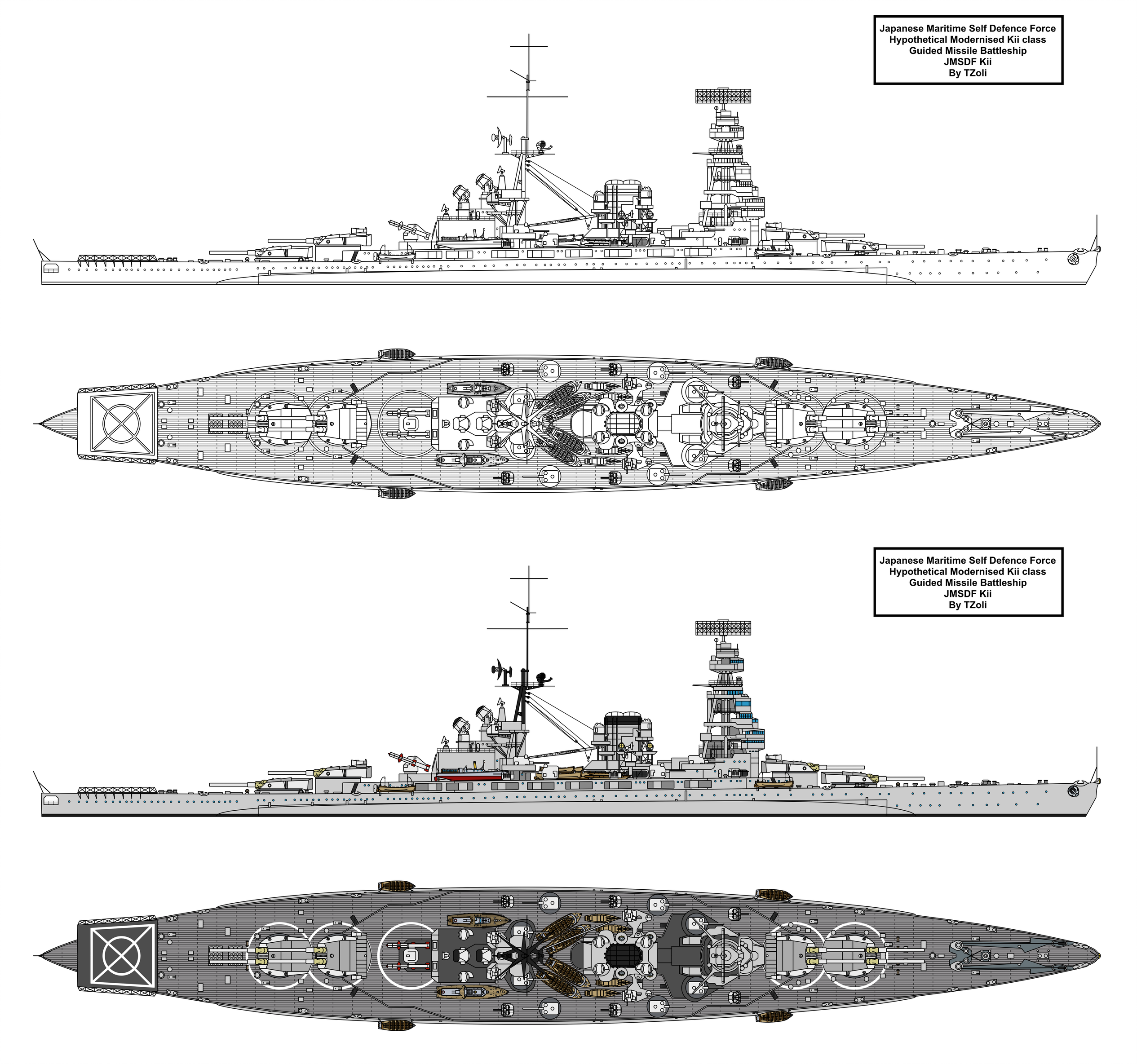 Asked by a friend to draw a cold war era modernised Kii class battleship with missile launchers and such.
Here is the product of never were warship's could had been modernization's hypothetical Guided Missile refit!

I've replaced the 3rd 41cm twin turret with a twin RIM-8 Talos missile launcher with it's associated loading equipment. The should had been 12,7cm Type 89 DP-AA Guns were replaced by the 5" Mark 18 single gun turrets, all casemated 140mm and 25mm AA guns were removed and added British 40mm Bofors Mark V as well as various US radar systems.
T

Jemiba said:
Great work and looking plausible as a ship between HMS Belfast and the KGVs. Could have been worthwhile
as a counter to the "Pocket Battleships". Smaller calibre guns, but double the number and better protection.
And as the Town class was originally envisaged to have four quadruple turrets, it may be plausible here, too.
Click to expand...

It was a real design from 1939 when Winston Churchill proposed a Super Cruiser to fight enemy heavy cruisers.
These were to be the stats:

Further study not continued on the super cruiser type as 4 ships would cost more then 3 Vanguards!
Click to expand...

Hypothetically speaking, would it have been possible to substitute 3 twin or triple 11" gun turrets for the 3 quadruple 9.2" turrets, while retaining the same displacement & dimensions?

Depending if you would accept Japanese philosophy of under armouring turrets as weight saving methods, otherwise the heavier shells, and turret armour would add weight to the 11" turrets. also depending on the / calibre as a longer gun would even increase the weight more so.

Great Tzoli : some alternate profile of warships inspire me especially the post war profile of japanese warships of ww2 .
M

good to see you contributing after the demise of the third warship projects board. After the demise of the third board I have done little because of work but have your emails from time to time with the compiled histories of never builts. Of course the departure of Stefano was quite startling especially as I would have met him in the USA on his contemplated vacation.
However, back to subject. Reviewing your ships, and after you make more practical designing, have you ever gone beyond paper to actually modelling the designs in styrene? As you will recall, I've done that a bit and did so before the springsharp calculator made it easier. Like to hear from you!
V