"
...
In its current configuration the ULAQ USV measures 11 m long and can carry a payload of up to 2,000 kg. It will also be capable of attaining a stated maximum speed of 35 kt and an operating range of 215 n miles.

The prototype USV is armed with a four-cell Cirit launcher and a pair of L-UMTAS missiles. The Cirit is an infrared (IR)-guided 70 mm missile with a maximum range of 8 km, which is designed to engage soft-skinned stationary and mobile targets. In contrast, the L-UMTAS is a long-range, laser-guided missile intended to defeat armoured threats out to a comparable range. Both weapons are supplied by Roketsan.
"

They are also working on a larger vessel, which can be manned with a very small crew or can be operated unmanned. 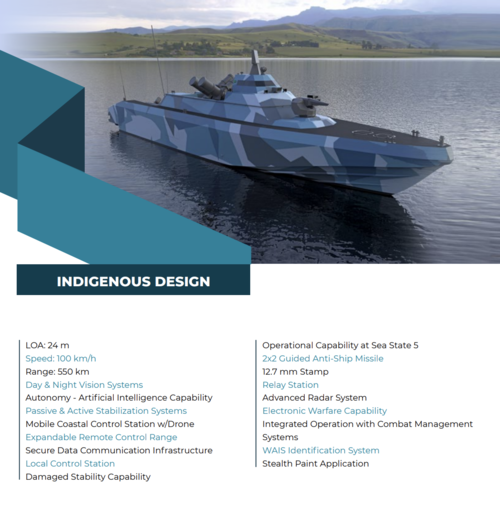