Finally, let me throw out the names of a couple other sf writers I quite enjoy, one somewhat known and one who appears to be somewhat obscure. The somewhat known one is Randall Garrett (his "Lord Darcy" stories would make an interesting series) and the little known one is Everett B. Cole who wrote primarily in Astounding/Analog and has some very interesting stories; his "Philosophical Corps" stories would make an interesting show concept, something of a combination of Star Trek and Mission: Impossible.

Orionblamblam said:
Not everyone in Star Trek is a hero. Some of them were just plain awful:

In good old England we just got rid of the actors

I just saw a video on Youtube that says they are going to have Jar Jar Binks in the new Kenobi series, who thought that was a good idea?

JohnR said:
I just saw a video on Youtube that says they are going to have Jar Jar Binks in the new Kenobi series, who thought that was a good idea?
Click to expand...

if he has become a evil sith lord, hell yes this is a good idea !!!
J

That would be one way to guarantee the fall of the Sith!! 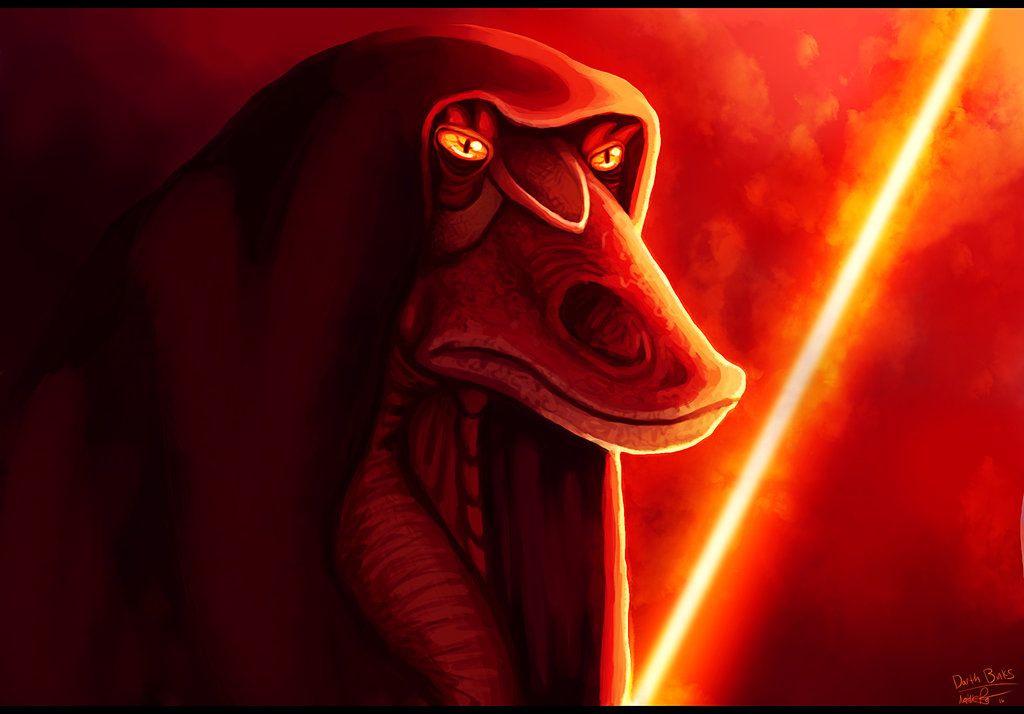 Not sticking up for another galaxy's political patsy,
but for those who remember his line: "Senators, General Delegates,
moy [ meaning himself] propose that we-sa [ meaning the Republic Senate] grant Emergency Powers....."

So sorry to ruin it, but technically Rep Binks didn't "give" the power to the Chancellor: he merely "ran the proposal up the flag pole" as the manipulated patsy... it was the majority % of the Republic Senate's "yea" votes are are just as much, or more, to blame for the outcome.

Just as it takes a majority rule of the US Congress to formally declare war, any theoretical Galactic Republic of a thousand-plus worlds wouldn't be so stupid so as to give the authority to a singular representative to decide "we-sa need goin' to war, so we-sa must give the Chancellor unbridled authority...".

But history shows it's easier to remember one name to put blame on, than to remember the several hundred others who agreed with their authorizing "yea" votes and actually made it possible.
J

DanielStarseer said:
But history shows it's easier to remember one name to put blame on, than to remember the several hundred others who agreed with their authorizing "yea" votes and actually made it possible.
Click to expand...

Yeah, but it matters a lot that it was moderate Senator Padme Amidala's office floating the proposal for emergency powers, and not some random hardliner. Padme had a bloc with her, and her office (including Rep. Binks) had a lot of influence.

The moderates and wishy washies would have seen a moderate bloc leader support Palps, and gone with the flow. Palps chose his patsy well.

EW reports: Felix Silla's friend and former Buck Rogers in the 25th Century costar Gil Gerard reported on Twitter that Silla died Friday after a battle with pancreatic cancer. Coming in at just under 4 feet tall and only 70 pounds, Silla was the perfect choice for the mumbling Cousin Itt on...
entertainment.slashdot.org

‘The Addams Family,’ ‘Buck Rogers,’ and ‘Star Wars’ star Felix Silla has passed away from cancer at the age of 84.

I never watched the re-boot of Battlestar Galactica when it was new but I've been watching it on the BBC and all I can say is; I wished I'd watched it when it was shown previously.

The 'Horror' channel has been showing the original BSG and whilst I think I saw it as a child, it's also really rather good - certainly better than I expected. However [and here it all goes downhill....], they've now moved on to the second series / Galactica 1980. Oh dear.... Where does one start? Somethings are so bad, they're good ('The Persuaders'?) but this is cringe-inducing, cheesey cr@p. I swear Lorne Greene grew that beard in an attempt to disguise himself

Simple Glen a Larson & Universal wanted to make second season of BSG for 1979/80
But then came 20th Century with Army of lawyer and sued Universal for plagiarism, copyright infringement, unfair competition and Lanham Act claims.
That BSG is copy 37 ideas of SW what follow was a 2 years trial
in Meantime ABC canceled the show, the reasons to expensive cost, the issue with 20th Century.

During time Glen a Larson made Buck Rogers in the 25th Century series for NBC
Again a success, but here start problems, ABC restart BSG after they won the hearing.
Now Larson working for THREE Serie in same time Galactica 1980, Buck Rogers season 2 and Magnum P.I.
and left the work to co workers, while most actors from BSG season 1 were not Interessed or working in other Shows
the result: Galactica 1980, Buck Rogers S2 ended the show, while Magnum P.I. became cult classic !

I just realized that Anthony Tully, of Shattered Sword fame, contributed to Saxton's old analyses of the Battle of Endor. Small world.

At least I think it's him. How many Anthony Tullys are there?

Also, Fractal finally did his version of the Imperial Nebulon, before the Rebels stripped the armor off. 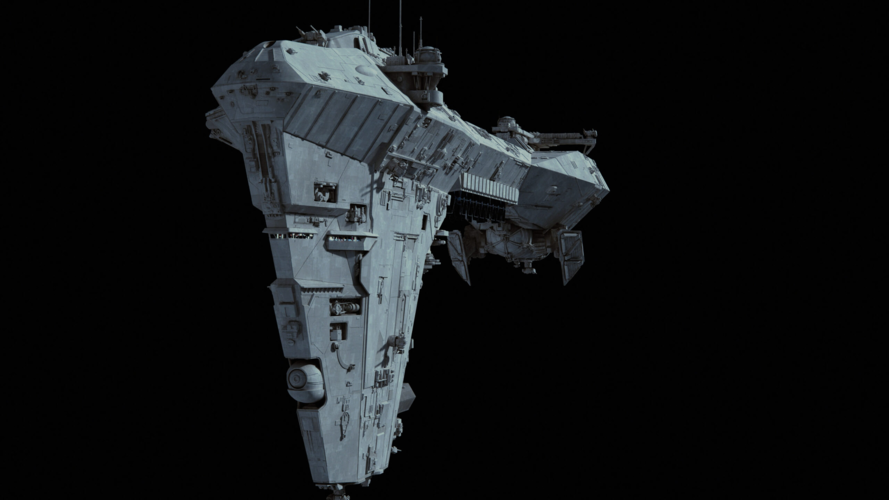 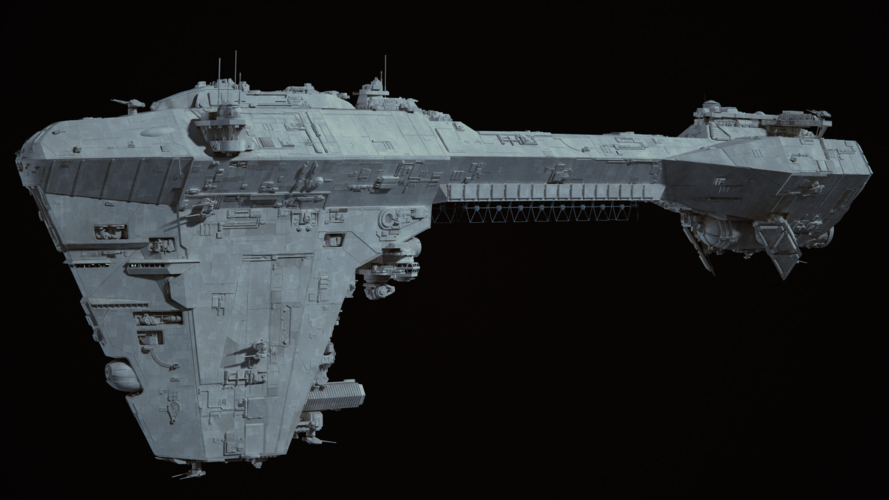 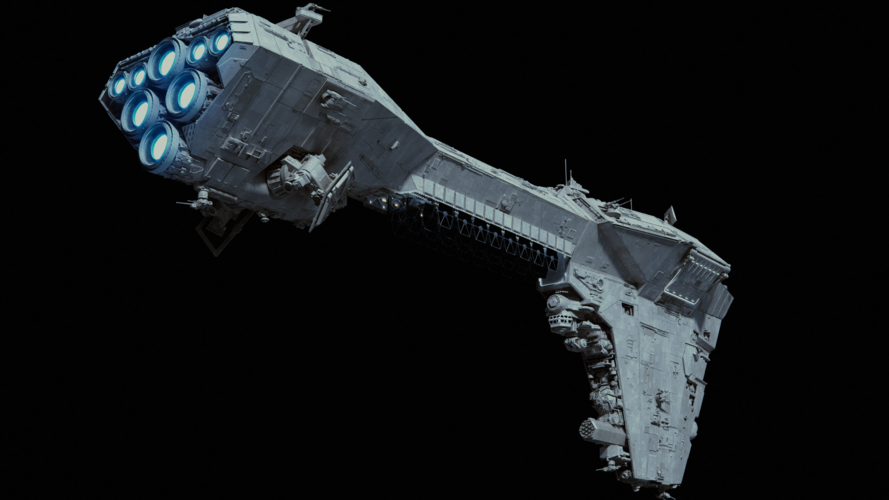 I read for moment online sci-fi novel PREY by Paradigmblue

Here most intelligent Life in Galaxy are Herbivore (intelligence as Evolution advantage against Predators)
There for The League of Species consider Intelligent Predator as kind of Sci-fi story.
Although the newest member of League are odd...

There no picture of them and if they goes to meet the Members races
They are in environmental suits with opaque helmets and there body language makes the Herbivore nervous.

As The League of Species make first contact with the Rashans, it goes terrible wrong.
and League are force to take Military action against them
while Newbies claim the Rashans are Intelligent Predator something impossible.
And first Space Battle goes wrong for League, the Newbies manage to save the survivors.

While Rashans reveal to be a nightmare Predators who consider everything as prey, they can hunt and kill and eat !
The survival of League of Species, depends now on the Newbies, a Species called Humans !

Michel Van said:
There no picture of them and if they goes to meet the Members races
They are in environmental suits with opaque helmets . . .
Click to expand...

Sounds like the Chigs in 'Space Above and Beyond' . . .

Michel Van said:
The survival of League of Species, depends now on the Newbies, a Species called Humans !
Click to expand...

That's been done numerous times before... vast, old, civilized Galactic Federation looks down on those scruffy Humans, but then things go bonkers and they have to rely on those same humans to save their bacon.

Orionblamblam said:
That's been done numerous times before... vast, old, civilized Galactic Federation looks down on those scruffy Humans, but then things go bonkers and they have to rely on those same humans to save their bacon.
Click to expand...

what i like on PREY is that author manage to tell this story from perspective of Herbivore and Humans
and the question will the League of Species trust the humans or will the league dispose them after the conflict is won, as safety measure ?

Highly recommended. Oxygen or Oxygene (it's French). On Netflix. It's a classic science fiction 'problem story' in that someone has to figure out and solve a problem without sufficient information, finding out as they go along.

Here's a review. It's definitely not for the claustrophobic.

With robust direction in an incredibly confined space and Laurent’s phenomenal work, Oxygen should feel like a breath of fresh air for people looking for something to watch on Netflix. (Sorry.)

Oxygen has many of the aspects of Gravity.

At 82, Ridley Scott further explores his android fetish. This premiered in 2020, so watch the 10 Season 1 episodes on HBO before looking at any of the many spoilers on YouTube. Season 2 will be ready in 2022. Episode 1 available in the second window below.

Most intelligent Life in Galaxy are Herbivore

JohnR said:
That would be one way to guarantee the fall of the Sith!!
Click to expand...

Well if Jar Jar ends burning in molten lava, that new serie will be quite popular... 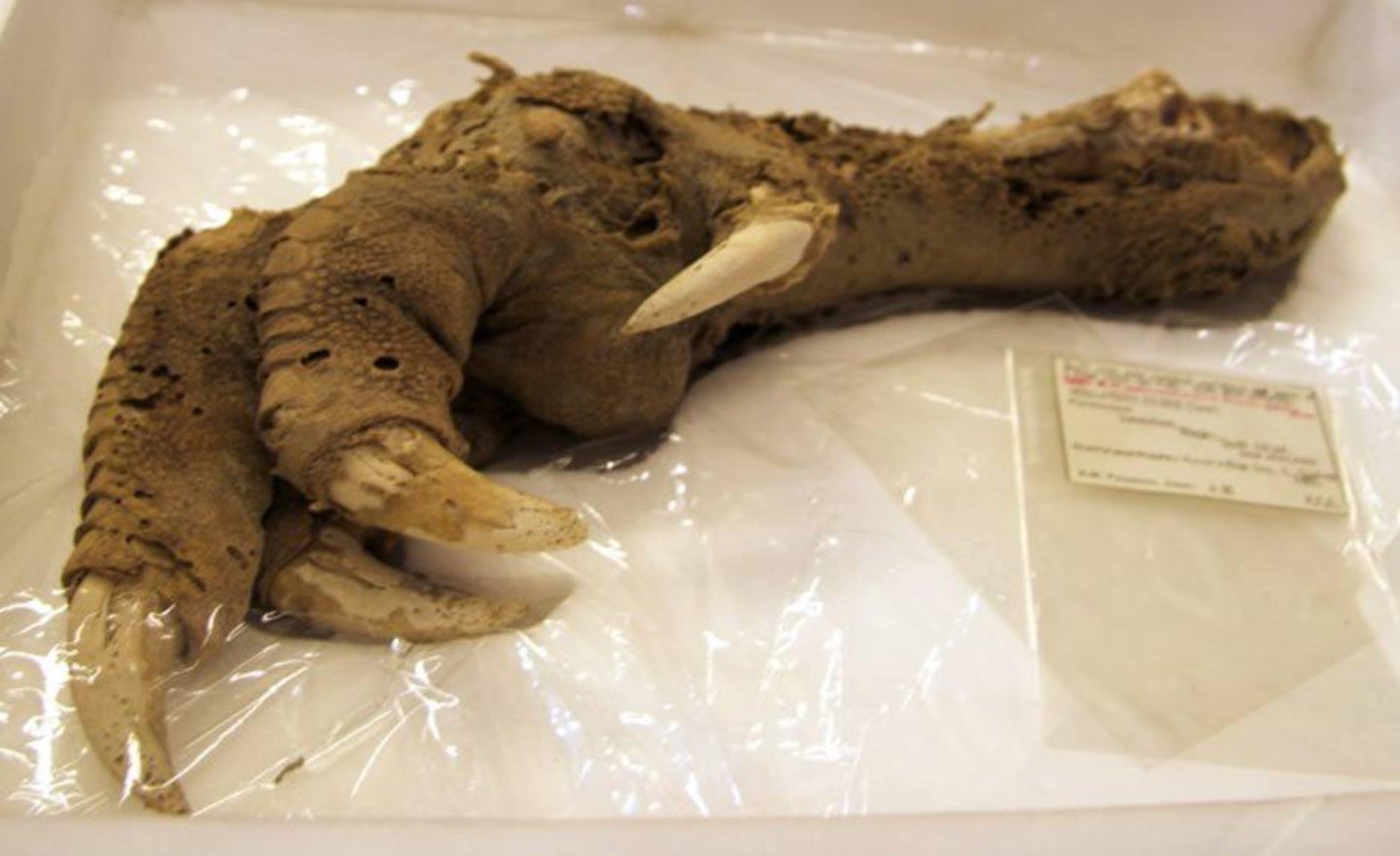 The claw belonged to a moa, an extinct flightless bird from New Zealand.

The claw, which is estimated at more than 3,300 years old, has been valuable for researchers, as it has bones and tissue intact, giving opportunities to conduct studies.

The flesh-covered claw has resurfaced, and social media is buzzing, saying it looks like something out of science fiction.

Actor Mark Hamill commented on the bird claw on Twitter, joking that it looked like "a Rancor's hand," a reference to "Return of the Jedi," in which the character Luke Skywalker faced a hulking reptile-like alien.
Click to expand...

"It is now written in the annals of legal history that Disney's Star Wars sequels, specifically The Last Jedi and The Rise of Skywalker, are mediocre," writes MovieWeb: This, according to Ninth Circuit Court Judge Kenneth K. Lee, who recently referred to the movies as such in a recent legal...
entertainment.slashdot.org

Grey Havoc said:
A recently revealed old Easter Egg that was in honor of Opportunity:
View: https://www.youtube.com/watch?v=dGXrFwZK6jU
Click to expand...

Just to warp things for everyone... 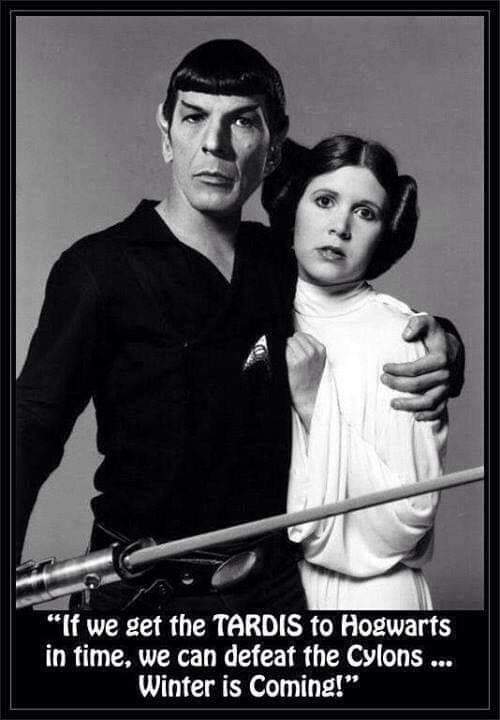 GTX said:
Just to warp things for everyone...

And may the powers of Grayskull be with....

The new model updated electric saloon will have a top speed of 200mph with ‘the right tyres’, says chief executive Elon Musk

Stop, you'll end up summoning the dreaded Spaceballs to our galactic neighborhood! Think of the children! Think of the planetary property prices!

They will force us to drop our air shield and steal our atmosphere!

Or maybe play Jews In Space.

Funny how that works. Decades ago I read an awesome short story called "Sandkings". Looked at it again a few days ago and noticed it was written by George R. R. Martin of Game of Thrones fame.