It always excites me to see what kind of wildlife wanders by the launch pads at Cape Canaveral. I watched a small herd of deer feeding at SLC-40 several hours after the launch of #ANASIS2 on Monday and it's such a surreal visual to see.
Click to expand...

It always excites me to see what kind of wildlife wanders by the launch pads at Cape Canaveral. I watched a small herd of deer feeding at SLC-40 several hours after the launch of #ANASIS2 on Monday and it's such a surreal visual to see.
Click to expand...

That will piss off the Seven environmentalist groups
And the State of Texas will piss off even more on them, since next Giga factory will be build in Texas for Cybertruck production...


could this be a roof for that building ?

Cooling. It's a huge PC radiator mounted on concrete frame.

Those dam SpaceX computer producing so much heat...

Filler material while we all wait for the static fire.

Although this is very subject to delay (Starship SN5 testing has been full of delays this past month), it seems that SpaceX is going to try and perform a 150m hop with SN5 some time during this Sunday or Monday, between 8am and 8pm central time.

This comes from:
1) New NOTAM TFRs released for those dates that require airspace cleared up to 26,000ft (vs 1500ft for static-fire testing).

0/6530 NOTAM Details
0/6534 NOTAM Details
2) Testing plans from (old) Boca Chica environmental impact assessments that claimed only 5 static fires (SF) would be necessary in total (ie not per-vehicle; SN5's first SF was SF #6 for the program).
3) The remaining SF road closures at Boca Chica being cancelled right after SN5 performed its SF; there were no noticeable signs of damage on SN5 either (ie no cranes moving to the pad, people swarming over the vehicle once it was safe, etc).
4) Elon's recent tweet about the static fire (last week he also said they were going to attempt to fly before the end of that week, but Hurricane Hanna and some hardware issues caused delayed those plans).
F


Wow! Satellite images of South Texas (via @Maxar) show the SN5 Starship prototype from space, as well as the SpaceX's nearby tent factory.
Click to expand...

I thought they were moving to their own proprietary alloy?

sferrin said:
I thought they were moving to their own proprietary alloy?
Click to expand...

They plan to "later this year" according to Elon, but given their pace of test vehicle construction there are likely to be several built using 304L before they transition again. Hybrids using both 304L and their house alloy in their construction would also seem likely.

Their 30X sounds like it'll be similar to 304L in composition as well, so it's less of them just jumping between alloys and more about moving towards their final 30X composition.

and new display at Restaurant
i think MK1 new Home


As we wait for SN5's 150m hop, SN8's sub assembly's are mostly complete. Note: the nosecone may not be used for sn8 as it's missing the lox header tank; which is necessary for it to complete the 20km flight.

Abort on the hop today.

from Technical point of view

SpaceX just flew a grain silo with a rocket engine...

Elon says that the next (v1.1) version of the legs will be ~60% longer, but also that they're designing v2.0 legs that will be "much wider & taller - like Falcon, but capable of landing on unimproved surfaces & auto-leveling".

Elon also says that they're going to do "several short hops to smooth out launch process, then go high altitude with body flaps" - this suggests that SN5 may do more hops, though they also have SN6 sitting idle at the construction yard. SN8 (SN7 was a sub-scale test tank) looks like it might be the first to receive body flaps as we've seen design changes on it like a large pipe that passes through the upper CH4 bulkhead (likely to allow propellant flow from the LOX header that will be in the nosecone), as well as a new "thrust-puck" bulkhead for mounting engines.

So after flying a water tower, this time they flew a grain silo ?
F 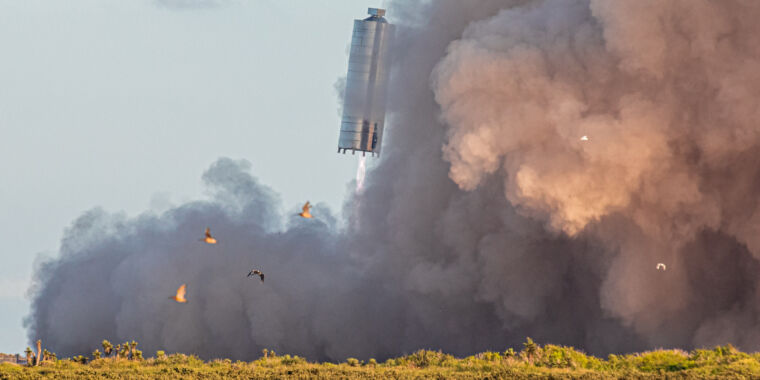 Mars remains a long way away. But it seems closer tonight.

Considering how powerful one Raptor seems to be I dread to think what 31 going at once is going to be like.
F

A view from the spectators.

under current development
we can consider SN6 as Backup for SN5 in case of RUD...
SN8 is so far know made from 304L steel.

For Flaps and cone on SN, i thing that happens after High Bay is completed and Operational
F

I’ll be interested to see what the launch stand looks like after one Raptor has been blasting away at it. Something much more substantial is going to be needed for the three engined 20KM flight.

First 5th landing of used booster. Slowly getting up to 10 flight goal before refurbishment.

Got up early to watch it, did not realise that it was a reused booster rocket. I wonder, how many reused boosters do SpaceX currently have to use as of now?
F

So it has been a big week for SpaceX. Dragon 2 return, Starship hop and Starlink launch.
F