In the last few days, Pointer and several other homeowners have received letters from SpaceX offering to buy their homes at three times a fair market value. SpaceX says the offer is non-negotiable and expires in two weeks. Sellers would get to come back for VIP launch viewing.

"When SpaceX first identified Cameron County as a potential spaceport location, we did not anticipate that local residents would experience significant disruption from our presence," the company wrote in the letter obtained by CBS News.
Click to expand... 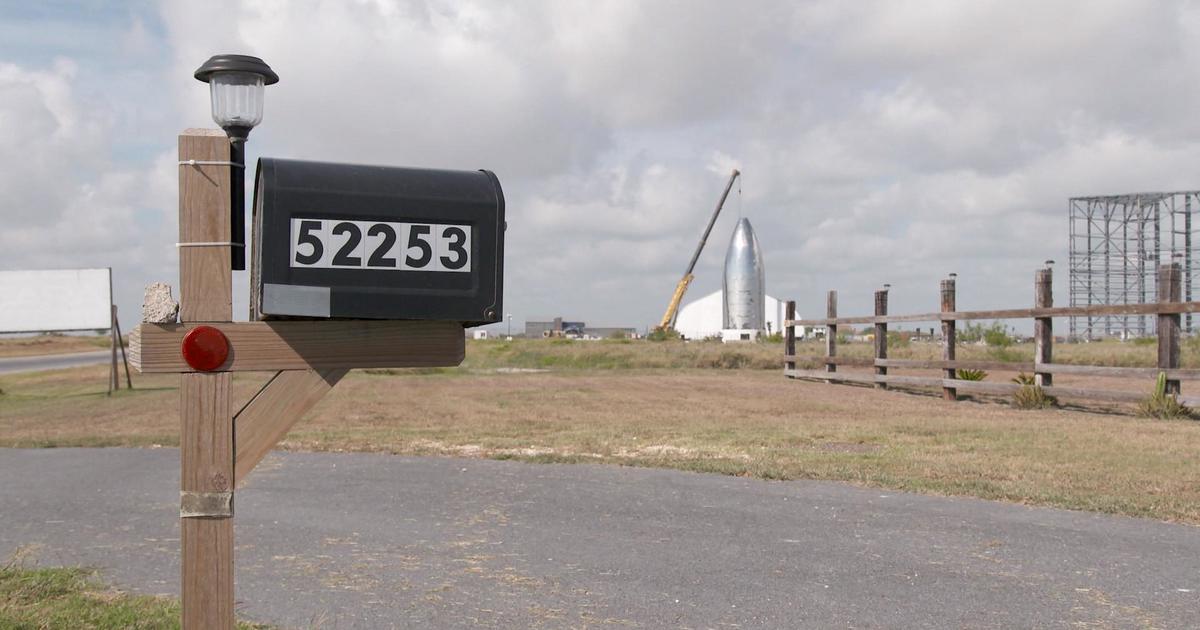 A launch site for SpaceX rockets is next to a tiny neighborhood east of Brownsville, Texas, called Boca Chica, where the rocket company has transformed life

What a man. With all the trash thrown at him he still act like a gentleman. Hat down Elon.
F

SpaceX crews are hard at work today, as you can see in the photos down below. With the attachment of the first section of StarShip Fin, crews were also seen lifting and moving the replacement section of the nose cone.
Click to expand...

Crazy to think that within the week StarShip Mk1 will be completed, everyday, every step, every piece. It feels like we’re getting closer to history, it’s crazy to be living in these times and I’m grateful I can share these events with you all.
Click to expand...

A new section was also spotted, I’m assuming it’s for one of the fins.
Click to expand... 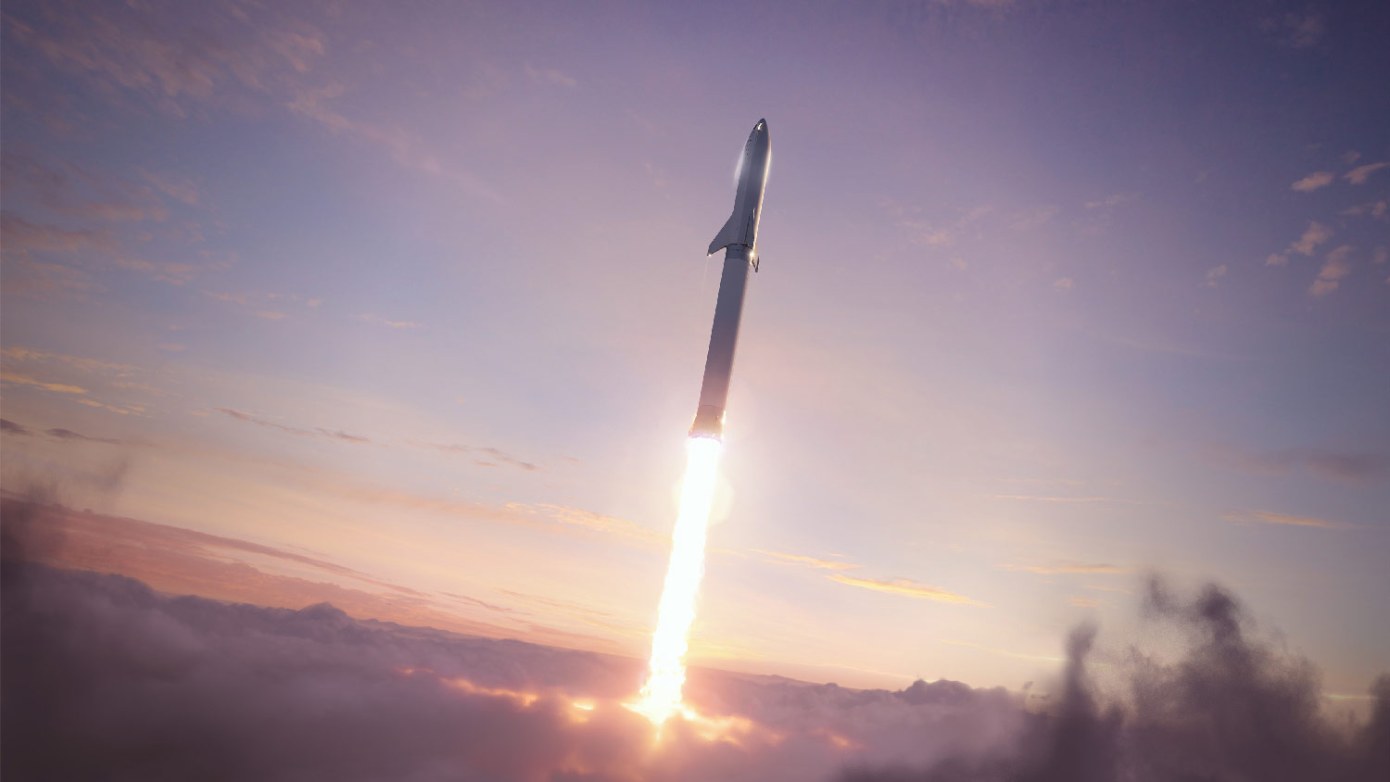 Don't understand that video, back in reply 2048, Musk says two moving fins and a smaller fixed one doesn't he ?

The old Starship design had 5 aerodynamic devices (that I'm going to call flaps or fins; they act as both depending on whether you're in ascent or re-entry / descent). 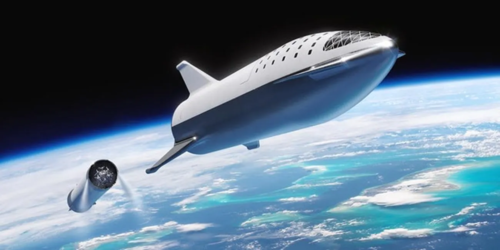 You can see that it has 3 rear fins arranged symmetrically at the rear and 2 fins up near the nose. 4 of those 5 aerodynamic devices would have hinged for variable dihedral / anhedral, while 1 of the 3 rear fins was fixed and existed purely as a landing leg (with aerodynamic shaping for symmetry). 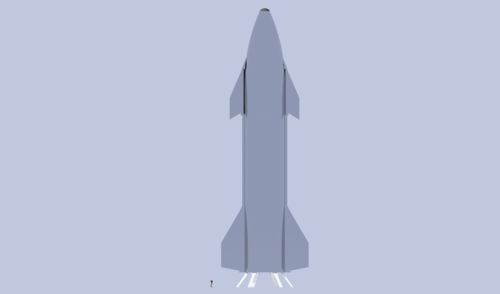 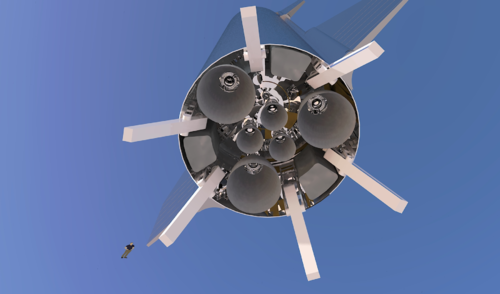 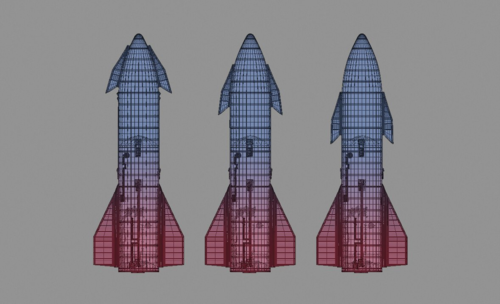 The top two renders (with a blue background) shows a speculative but potential landing leg design, as well as the raceway / chine that goes between the forward and rear fins. The bottom image with the grey background shows potential positions for the forward fins (within the next 24 hours of this post we'll probably have a good idea of where the forward fins are going to be mounted).

Also note that the current vehicles being built are unmanned test vehicles; a manned version (like the one that's being used for the DearMoon mission) will likely have panoramic windows similar to the old design.

The new design makes it look like an old fashioned ballistic missile.
A

So it no longer lands on its three fins BUT on separate legs ? somewhat like a Falcon 9R. Having to support the entire landing weight probably badly influenced the fins design and internal structure, so they took the leg job out of them and made the legs a separated thing.
So much for Tintin rocket.
Main issue I can see is less stability... although he certainly added more legs to compensate.

And the canard are moving downwards / more to the rear. Canards on the nose are pretty rare, most combat aircraft prefers having them on the cockpit sides rather than on the radome. Looks like Starship is following the trend. Skylon is different, having such a loooooooooooong airframe.

Pretty amazing how the design still evolves as the demonstrators / prototypes are being build !!
Last edited: Sep 25, 2019
A

Yeah like those Soviet V-2 derivatives, the R-1 and R-2. Minus the canards.

Anyone know why SpaceX changed the design? It looks rather strange with those canards.
F

FighterJock said:
Anyone know why SpaceX changed the design? It looks rather strange with those canards.
Click to expand...

I imagine we might find out in Elon’s presentation on the 28th September.
F

I wonder what sort of weight the crane is lifting here?

Lots of non-flight hardware and incomplete hookups, but this is far and away our best look yet under that fairing.
F