I've just read in Shirokorad's "Tank war on the eastern front", that RNII designed and built a heavy demolition rocket intended for use at the Mannerheim line in Finland in early 1940, in conditions of deep snow.
The rocket is supposed to carry a 1000 kg warhead (!) at the range of 2-3 km, i.e. it was much bigger than e.g. the huge 250 kg TT rocket of 1933.
Two types of launchers for four projectiles each were developed, one was to be mounted at the back of the T-34 tank and was to be jettisoned after launching rockets in a salvo, the other was designed as a steel sledge with rotating launcher on it, to be towed by a medium tank.
The latter launcher was actually built and sent to the Leningrad front in early 1940 but not used in combat.

Are there any further details known about this mysterious weapon of 1939? Any data? Actual designation?

I recently obtained a Russian book on the BT tank and it has a photo of a BT-5 rigged up with two of the TT rockets, one on each side of the turret. The text is in Russian sadly but I'll post a image from the book showing the BT-5 mounting the rocket system once I'm back at my library with due credit.
B

Thanks!
I came across the description in Shirokorad's "Encyclopedia..." in the meantime - it actually contains the same facts as the "Tank war..." plus the drawing (Shirokorad usually repeats the same chapters in numerous books). But I don't like the rocket in this drawing - it looks like a retouched usual M-13 added to an original drawing just to make it more attractive. For example - RS in 1939/40 had plain sheet metal fins, without ribs introduced by M-13 only.
The "Tank Torpedo" rocket and the experimental RS-132 installation on the BT-5 are a different story sadly. :-\

Same photos in the book I have, Танки БТ.

Sure, it's an heavy demolition rocket !

The Katiuscia surely was a little more light and more strong that these types of heavy rockets ! :

It was an interesting experiment in anyway !
L

What's the weight / designation of these?
http://www.secretprojects.co.uk/forum/index.php?action=dlattach;topic=7823.0;attach=103054;image
(the BT-5 with two big rockets on top)

Indeed. I would love to roll into a Flames of War game with those strapped to my BT company. ;D

Sure, it's an heavy demolition rocket !

The Katiuscia surely was a little more light and more strong that these types of heavy rockets ! :

It was an interesting experiment in anyway !
Click to expand...

lastdingo said:
What's the weight / designation of these?
http://www.secretprojects.co.uk/forum/index.php?action=dlattach;topic=7823.0;attach=103054;image
(the BT-5 with two big rockets on top)
Click to expand...

The rocket was called TT or Tankovaya Torpeda (e.g. Tank Torpedo). It was developed in early 1930s, while the prototype RBT-5 tank was tested in 1934. The TT had 420 mm calibre, was 1805 mm long and weighted 450 kg, including 250 kg HE. The max. range was 1500 m.
The rocket was found to be inaccurate, with too short range and complicated reloading. 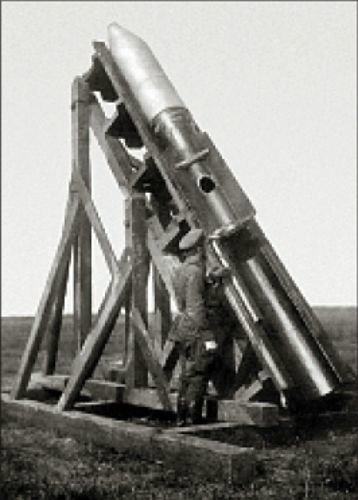 So the drawings are genuine though, thank you!
Just the rockets are described as carrying 1000 kg HE - so the whole rocket could be probably even twice as heavy.
B

Grzesio said:
So the drawings are genuine though, thank you!
Just the rockets are described as carrying 1000 kg HE - so the whole rocket could be probably even twice as heavy.
Click to expand...

As far as I know, this is not the largest rocket at the time. In 1916, a gunpowder rocket-torpedo by engineer Tikhomirov, apparently developed for the fleet, was tested. The rocket could fly through the air or float underwater. The underwater speed was 100 mps (360 kmph). This is probably the first Russian anti-ship missile ever built. I have no information about the missile, but it should carry no less explosives than the standard Russian naval torpedoes of that time, 18" M1912 is 810-kg torpedo with 112 kg of explosives. Tikhomirov's torpedo with such a charge should weigh more than a ton. 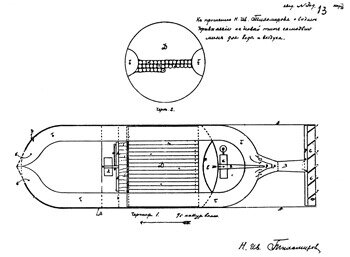 You can see - powder ramjet.
Tikhomirov, by the way, in the 1920s worked on a "large rocket" project for launching a man into space. In 1927, a report appeared in the press about a giant rocket 107 meters long, for a flight to the moon - presumably, this was one of Tikhomirov's projects.
Share:
Facebook Twitter Reddit Pinterest Tumblr WhatsApp Email Share Link