From Code One magazine:

The Convair XF2Y-1 Sea Dart rode on hydro-skis for takeoff. It flew as a prototype and never entered production. It remains the only supersonic seaplane. A total of five aircraft, dubbed were built. Only three flew. The first XF2Y-1 was later refitted with two J46 engines (in place of two J34 engines) and a single-ski configuration to address takeoff and landing problems. The modified XF2Y-1 first flew in late December 1954. After some initial problems, the single-ski design proved successful and made for safe takeoffs and landings even in fairly rough seas.
Click to expand...

Sorry for that bad quality,

I can't ID this aircraft,may be Convair design !.

I can't ID this aircraft,may be Convair design !.
Click to expand... 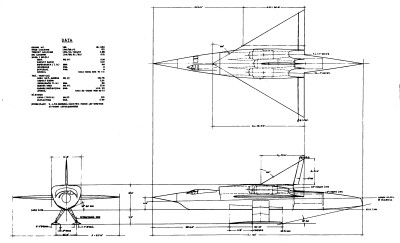 If it's the same Convair Skate as the one above, how come the tail fin has been moved so far back, and why is its shape so un-Convair? I don't recall seeing this in any of the other Skate/Betta designs I've seen.

...On the subject of the Sea Dart, anyone ever come across a general explanation as to why one ski provided significantly more stability during takeoff than two skis clearly did not?

OM said:
...On the subject of the Sea Dart, anyone ever come across a general explanation as to why one ski provided significantly more stability during takeoff than two skis clearly did not?
Click to expand...

The problem with the two-ski configuration that was to be addressed by the single-ski was the "pounding" and resonance problems that resulted from two long, thin skis compared to one wide one. After some development, the single-ski configuration was eventually landed and taken off (once) from the open sea in six to ten foot waves, somewhat in excess of the original requirement.

A model of a Consolidated Vultee Aircraft Corporation Skate 7 seaplane was tested in Langley tank no. 2. Resistance data, spray photographs, and underwater photographs are given in this report without discussion.

The Consolidated Vultee Aircraft Corporation has proposed a jet-propelled type of seaplane (called the "Skate") in which the hull bottom
is merged into the wing resulting in an over-all depth of airplane much less than used in conventional flying boats. Models of several different configurations of the Skate type seaplane have been tested by Consolidated Vultee using their open-water hydrodynamic test facilities.

At the request of the Bureau of Aeronautics, Department of the Navy, a general evaluation of the hydrodynamic characteristics of the Skate 7 is being conducted in Langley tank no. 2. A 1/13-scale powered model used in these tests was designed and constructed by the Consolidated Vultee Aircraft Corporation and designated Langley tank model 261.


here is a drawing for Convair Skate maintenance and a Model for it.

This Lockheed project looks a lot more recent, then the other projects. Somebody
who knows the mission concept behind it ? Judging the layout of this fighter, I would
think of the mid 70's, a time when all other combat seaplane projects were long
abandoned.
Click to expand...

"Over twenty years after the SeaDart program ended, Lockheed Aircraft Company in Burbank, California, made design studies for a Mach Two water based fighter with the exact large single ski configuration tested on the XF2Y-1 SeaDart. Their aircraft design had a modified deltawing with twin afterburning engines mounted above the wings. Lockheed's ski designer, Frank Thornberg, had also designed the large single-ski for the Convair SeaDart. Lockheed made proposals for their aircraft to NATO nations for basing in Europe's many lakes, rivers and sheltered water areas."

A large model was made by Lockheed to promote the concept to the industry and prospective buyers.

As I understand, the artwork from Matej's post on August 28, 2006, shows the Lockheed Mach 2 seaplane over the Dutch polders.
Click to expand...

Has anyone come across any more info on this project? Images below from earlier in this topic, courtesy of Jemiba, Matej & Dronte (other images found by Overscan & pometablava seem to have gone AWOL, unfortunately). I don't suppose we're any nearer to nailing down it's CL number?

Tony Butler mentions in his book "American Secret Projects Fighters & Interceptors" a Lockheed design from 1982 called Hydro Star. He describes it as a blended wing/body design with leading edge root extensions, cranked delta wing and engines mounted above the rear fuselage either side of the fin. Unfortunately theres no picture, but I'm quite sure it's the concept we have here. The idea was to have a fighter to operate form water airbases, as land bases were still considered vulnerable to attack.

In "Future Fighters and Combat Aircraft" by Bill Gunston, there is a brief entry about it in the Lockheed-California Projects section, including a cropped version of the above color painting of a Dutch basing concept. The text reads:

"Resurrecting an idea dating from World War II, and last seen in the Convair XF2Y family of 1953, this hydroski fighter would operate from water and thus, at a stroke, could be dispersed away from obvious fixed sites, and could not be bothered by bombing of its airstrip! Lockheed has studied various wing shapes ad ski configurations, this example having a large single ski."

The model photos of the Lockheed design looks as if they were taken at a trade show or conference exhibit - maybe an SAE or AIAA gig - and note in the background of one pic is a poster showing the very-early-80s ATF concept:


At the time there was a good deal of concern about counter-runway weapons, particularly dibbers that could "heave" concrete. That was the root of the initial requirement for ATF to use 1500-foot runways and the F-15 SMTD, based on a calculation of how fast the Sovs could make holes in runways, how fast we could dodge mines and fill them in, and (consequently) the longest stretch of undamaged runway we could hope to maintain.


At which point, presumably, someone at CALAC asked the question "Have you ever tried to blow a hole in a lake?"

Jemiba said:
Two other french companies involved in this field, were SNCASE, with the SE X-101 and Nord Aviation with a design, which I know just from one photo, a model for hydrodynamic tests. From this photo and Cunys descriptions; I’ve tried to make a drawing. Any additional information is most welcome !
(Picture 1 and 2 from Cuny „Les Avions De Combat Francais, Tome I“)
The only other seaplane jetfighter I’ve found, is a Lockheed design, similar to the Convair Seadart
(From http://www.strange-mecha.com/aircraft/J-Sea/J-Sea.htm)
Now it’s up to you, I hope for a lot of other types, there must be more !
Click to expand...


I can't ID this jet USA seaplane,a fighter or not,real or just a hypothetical design ?.

Read the article from the link and you will find its written by the illustrator Gordon C. Davies for the Eagle comic, and is almost certainly purely speculative.

PaulMM (Overscan) said:
Read the article from the link and you will find its written by the illustrator Gordon C. Davies for the Eagle comic, and is almost certainly purely speculative.
Click to expand...

Where is that article my dear Paul ?,I can't find it.

There is a link to Google Docs on the page Hesham linked to.

TomS said:
There is a link to Google Docs on the page Hesham linked to.


can you give me a direct link ?,thanks.


It's the link at the bottom of the page you posted that says "click here." :

Link is not correct. Couldn't find the page.

Jemiba said:
Found in "Der Flieger" .11.1954, a variant of the Convair Skate, already with a
delta wing, but still without the elongated tail :
Click to expand...

Say, that's neat. Thanks for posting!