This XF-103 model was made by Al Parker around 1998. Al Parker is a professional model maker, now retired, who worked for Douglas. He also built movie props, including a 20-ft aircraft carrier for the motion picture Tora! Tora! Tora! This XF-103, and others like it, are resin re-casts of an original, factory model. I have a couple of them. It would have been difficult for Gen. Curtis LeMay to write his name on this item, several years after his death.

well, 500 bucks for re-cast is a little too high
C

flateric said:
well, 500 bucks for re-cast is a little too high
Click to expand...

Yes it is. I paid $275 for mine, and that included a modification of the exhaust nozzle to the square configuration, which I prefer. I guess the extra $225 is for Gen. LeMay's post-mortem autograph. This must have required a time machine which, as we all know, is expensive to operate.

I suspected it might not have been genuine, as it just looks too new to be original. Good to have it confirmed.

What is this in Air Pictorial magazine ?,an early artist impression
to republic XF-103 !.

taildragger said:
Just a quibble, but I think your criticism is of concurrent development, not the weapons system concept - which simply (simple to describe anyway) means to develop an entire integrated system from the start.
Click to expand...

True. Maybe it would have been more accurate to say "A weakness of the weapon system concept is that it can too easily become a hostage to concurrent-development problems".


The other problem with an "integrated" platform is the potential for making it so integrated that future changes with demands on weight and/or space become difficult to incorporate. This is sometimes not too much of a problem with many aircraft (though it may be more of an issue with a stealth design which is obliged to carry its primary weapons suite internally), but certainly impacts on warships unless they have "space and weight reserved" considerations built in from the start (with all the effects on size, cost, etc. which those precautions entail).

What is this in Air Pictorial magazine ?,an early artist impression to republic XF-103 !.
Click to expand...

Looks like someone's PSed a picture of a soviet Kh-20 [AS-3 Kangaroo] missile...

I have attempted to rid a few XF-103-related topic titles of the embarrassing "Thunder..." name.

Please make sure to remove that name from all your personal folders and lists so that the mistake stops spreading!

Not sure if this was posted yet; interesting footage of the F-84G with periscope. Go to 13 minutes 56 seconds...

Perhaps because of discoveries during the F-84 test phase in 1958 Chicago Aerial Industries were awarded a contract for investigation into the use of optical fibres in a similar periscope system [ attached ].

Curiously the US Navy continued along their own independent line of research into aircraft periscopes. They planned to install an experimental unit in an A4D, changed their minds to an A3D ( and had designed the installation ) but then cancelled the project when the contractor stated thay they couldn't achieve the required manufacturing tolerances: www.dtic.mil/dtic/tr/fulltext/u2/283115.pdf

Hi fellows,
digging in my files (looking for another matter) I found those drawings of XF-103 that, at glance, appeared to me not already posted. If they are, forgive me...
I think the section with bullet-shaped nose is a first configuration whilst the one with a small dome for periscope was the definitive one. The two other pictures are details of the landing gear as seen on the full scale mock-up.
By the way, I think that the ill-fated F-103 remains a really fascinating plane

Maybe i'm missing something...but how was the XF-103 supposed to takeoff with the landing gear that far back?
it looks like there's no room to rotate and at any rate the landing gear is way aft of the cg, requiring a lot of download. Was its stance on the landing gear nose high, such that the wing had some angle of incidence even without rotating the body?

According to former Republic engineer Boriz Beizer, with a hell of a lot of JATO bottles and a prayer or two:

Someone once said, "if there were a runway that went all the way around the world Republic could build a plane that would use it all". Was in an old book from the 60s or so.

I believe it. Anyway, rotation on takeoff seems like the last of Republic's problem with this bird anyway! ;D
BTW, Beizer's story is a gem, i can't get enough oral history straight from the participants' mouth.
S

PaulMM (Overscan) said:
According to former Republic engineer Boriz Beizer, with a hell of a lot of JATO bottles and a prayer or two
Click to expand...

I can't help but wonder if it's buried in somebody's garage. 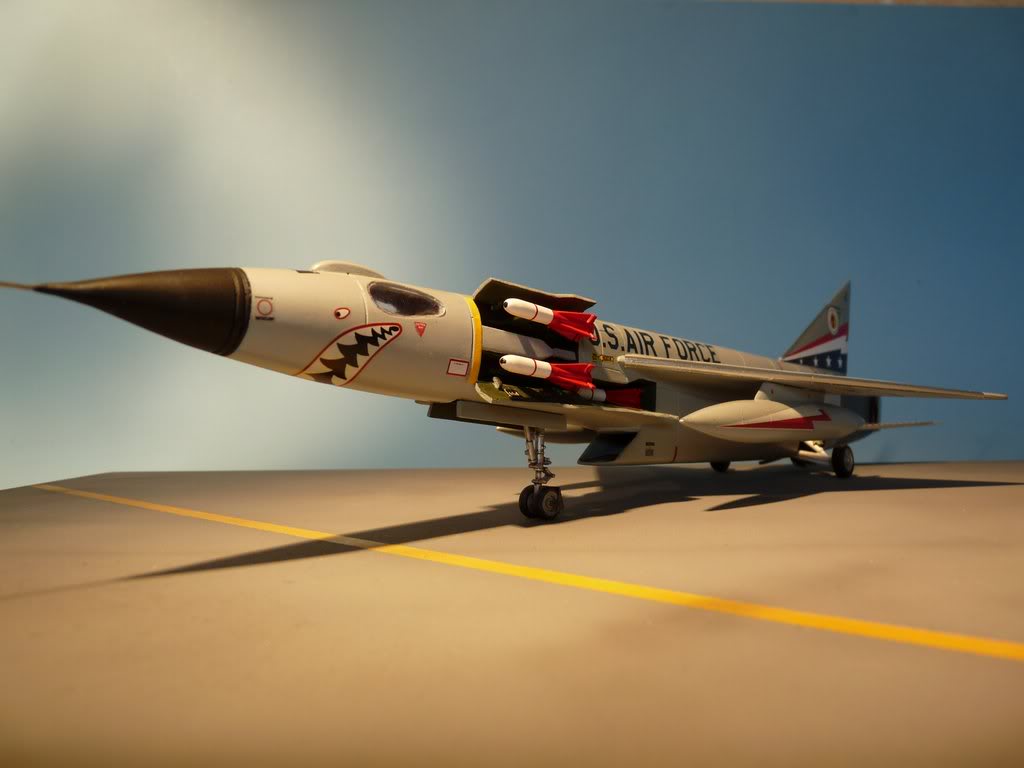 Up to now, I have not seen a in-depth three side view of this airplane.
Justo-san's following contribution is really surprising!!

https://en.wikipedia.org/wiki/Republic_XF-103
Wikipedia says that....
"Wings and control surfaces
All of the control surfaces were pure delta wings. The main wing was swept at 55 degrees, and could be rotated around the spar to provide variable incidence. For takeoff and landing, the wing was tilted upwards to increase the angle of attack while keeping the fuselage nearly horizontal. The length of the fuselage made it difficult to achieve the same end by tilting the entire aircraft upwards, which would have required a very long extension on the landing gear. The system also allowed the fuselage to fly flat to the airflow at various speeds, setting the trim angle independent of the aircraft as a whole. This decreased trim drag, and thereby improved range.(Is this true? Same as XF-91?)

The wing was split at about two-thirds of the span. The portion outside of this line able to rotate independently of the rest of the wing. These movable portions acted as large ailerons, or as Republic called them, tiperons. In order to keep the surface area in front and behind the pivot point somewhat similar, the split line was closer to the fuselage in front of the pivot. Large conventional flaps ran from the fuselage to the tiperons. Hard points for drop tanks were available at about  1⁄3 of the way out from the wing root.

The horizontal stabilizers were seemingly undersized, and mounted below the line of the wing. The larger vertical fin was supplemented by a ventral fin for high-speed stability. This fin folded to the right, as seen from behind, during takeoff and landing to avoid hitting the ground. Two petal-style air brakes were mounted directly behind the horizontal surfaces, opening out and up at about a 45° angle into the gap between the horizontal and vertical surfaces. A provision for a braking parachute is not evident on the mock-up or the various artwork, although this was a common addition for aircraft of the era."
XF-91.
https://en.wikipedia.org/wiki/Republic_XF-91_Thunderceptor
"Another design change was the ability to vary the angle of incidence of the wing as a whole, tilting it up for low speed operations during takeoff and landing, and then "leveling it off" for high-speed flight and cruise. This allowed the fuselage to remain closer to level while landing, greatly improving visibility."

Wind tunnel test model with round shape exhaust nozzle.(Now I believe this is the final shape of XF-103. Ventral fin is little complicated shape compared with following super drawing by Jozef-san. Wing tip aileron up?)
http://www.secretprojects.co.uk/forum/index.php?action=dlattach;topic=4304.0;attach=576570;image

http://www.secretprojects.co.uk/forum/index.php?action=dlattach;topic=4304.0;attach=557420;image
Jozef-san! How do you think about wing tip aileron and wing tilt mechanism? Or anyone knows about this? Any official document exist?

Hi! Early design mockup.
I can see slit for periscope at the nose of the aircraft.

Can you see some face in the slit? ;D

Hi!
Watch the trailer for The Missing Century Fighters XF-103.