If I understand the concept correctly, the track could go straight up the ramp then ---

in the article linked above it says

Back in 2010-12, during the MoD’s Conversion Development Phase (CDP) for the QEC carriers, two electro-magnetic catapult solutions were considered. GE Coverteam in the UK had developed the EMCAT (Electro-Magnetic CATapult) system, capable of launching aircraft with take-off weights, ranging from 50 kg to more than 32,000 kg. Using slightly different technology, the company had also developed Electro Magnetic Kinetic Induction Technology (EMKIT) variant, primarily UAVs in mind for aircraft weighing up to 11,000kg. EMCAT was described as robust, based on COTS technology and had conducted hundreds of successful launches.


Despite the promise of EMCAT, the MoD considered EMALS the lower risk option and signed a contract with General Atomics worth around £123M for the first EMALS/AAG set. (It has never admitted how much it had to pay in compensation for later cancelling the deal). There is a chance the EMCAT/EMKIT prototypes could be dusted off and resurrected but GE Converteam was not working on aircraft recovery systems. Alternatively, GA could offer an ‘EMALS Lite’ option as they benefit from having accumulated the most experience with electromagnetic aircraft launch of any company in the world. There may be other options available but this is a very specialised requirement and a niche market.
...
The QEC carriers were designed with reserves of electrical generating capacity which is probably adequate for ‘EMALS Lite’ but there would still be very significant work involved in the integration of the ALRE, power supplies and control systems. HMS Queen Elizabeth will be due to begin her first major refit in 2023 and even if the technology is available and design can be ready in such a short timeframe, this work would undoubtedly add many months to her time in dockyard hands.
S

If I understand the concept correctly, the track could go straight up the ramp then ---
Click to expand...

I'm not so sure about that. There will still be some kind of shuttle that goes down the track, and must maintain a certain separation from the upper and lower inner surfaces of the track. This could be a problem on the curved ramp section, and then there will be the issues of additional vertical stresses on the track in that section, and well as stresses in the shuttle decelleration section which will either have to be short of the hump to give space to lessen those stresses, or on the hump. The latter, I think would need a lot of overengineering, and prove problematic to deal with on operations.

Having a track leading up to, let alone on the ramp also raises the spectre of wheel damage for F-35B taking off.
K

After looking at electromagnet diagrams of trains and such, which do go around curves and up and down gradients, I could see the shuttle built in, say, three short parts, which are joined by a hinge pins. This would allow the shuttle to "bend" as it travels the curved section of the ramp.

The braking of the shuttle would be quite abrupt if the magnets are used to do that. I've seen what can happen when you bang an electric motor into reverse ----

I hope that Queen Elizabeth has made it through the canal and is now in the Red Sea.

Should we already change this thread tittle to "RN QE aircraft carrier class" or something similar?.
The program status is "today" not "future" since QE was comissioned in late 2017...

Should we already change this thread tittle to "RN QE aircraft carrier class" or something similar?.
The program status is "today" not "future" since QE was comissioned in late 2017...

I'm for it, though we should leave a "CVF" reference in the new title to reflect this thread's origins.

Hood said:
It seems HMS Diamond is currently out of action, possibly due to a WR-21 failure.

A turbine replacement in itself isn't much to worry about, but posting due to the update on the Power Improvement Package at the link. Progress seems to be slower than planned. The PGMU programme for the T23s seems to be even slower progress at present.

And it does reveal that for all the current PR of having two carriers at sea at once (QE now East of Suez and PoW West of Gib), that the escorting fleet is spread very thin with not much cover for unforeseen events.
Click to expand...

Only one of Royal Navy's flagship destroyers is operational, ministers admit
Only one of the Royal Navy’s Type 45 destroyers is operational, ministers have admitted.
HMS Defender, recently at the centre of a diplomatic row with Russia following a voyage off the Crimean peninsula, is the only vessel of the class without an issue.
The other five Type 45s all need work, either planned or due to problems developed while at sea.
Tobias Ellwood MP, chairman of the Commons Defence Committee, suggested the situation was “operationally unacceptable”.
Both Defender and HMS Diamond were part of the carrier strike group (CSG), the UK’s attempt to demonstrate its naval power around the world.
But Jeremy Quin, the Defence Procurement Minister, said HMS Diamond had experienced “some technical issues” and was having maintenance, inspection and “defect rectification”.
HMS Daring and HMS Duncan are having planned “deep maintenance”, while HMS Dauntless has been upgraded and is due to return to sea for trials this year.
HMS Dragon is undergoing “planned maintenance” in advance of further operational commitments.
Mr Quin told MPs on the committee: “We have two Type 45s embarked with the CSG, Diamond has got current issues but I hope they will be able to be rectified shortly.”
Mr Ellwood said: “HMS Defender is now our only current operational Type 45.
“If that ship experiences propulsion problems as we have seen across the Type 45 family, then our carrier group would have to be forced to lean on a Nato ally to ensure that we have destroyer protection.
“That really indicates - bottom line - we need a bigger navy.”
Click to expand...

Only one of Royal Navy's flagship destroyers is operational, ministers admit

Sorry, thought it was relevant since the RN Carrier Strike Groups (well, one at the moment) are also covered in this thread.

The Carrier Strike Group is moving 'lawfully' and will not be 'provocative', the MoD said 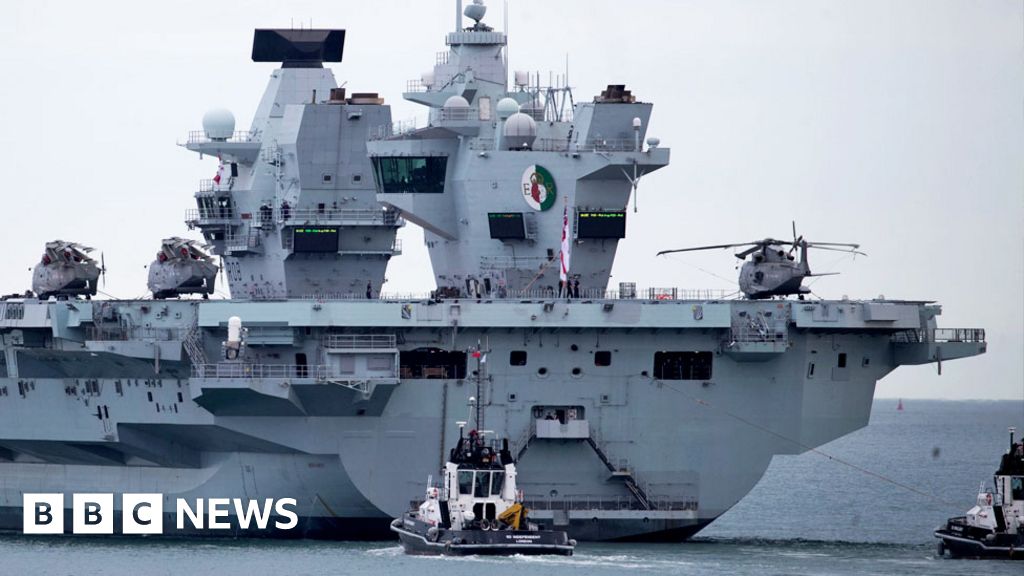 A fleet of British ships is currently sailing through the South China Sea en route to Japan.
www.bbc.com 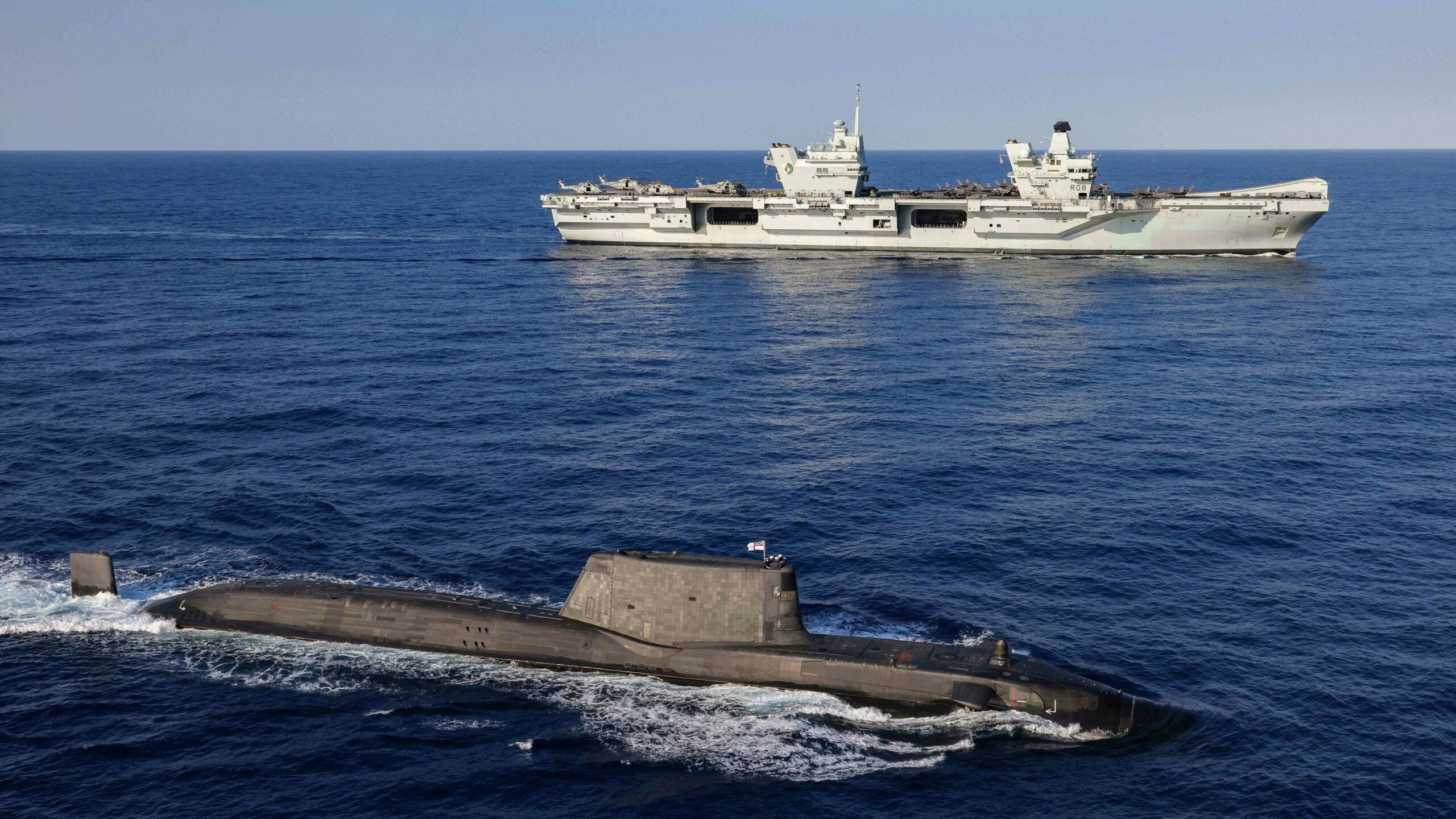 The British flagship, HMS Queen Elizabeth, has entered the South China Sea for the first time.

On Saturday, officials from Japan, Britain and the United States welcomed the carrier at a dock at the U.S. Navy’s Yokosuka base. The Royal Navy band on board responded by performing music with bagpipes.

The port call by the carrier strike group is said to be the largest in the history of Japan-Britain relations, according to the British government.

British Ambassador to Japan Julia Longbottom emphasized the significance of its visit, saying, “We believe this visit marks the elevation of our defense and security relationship to a new level.”
Click to expand... 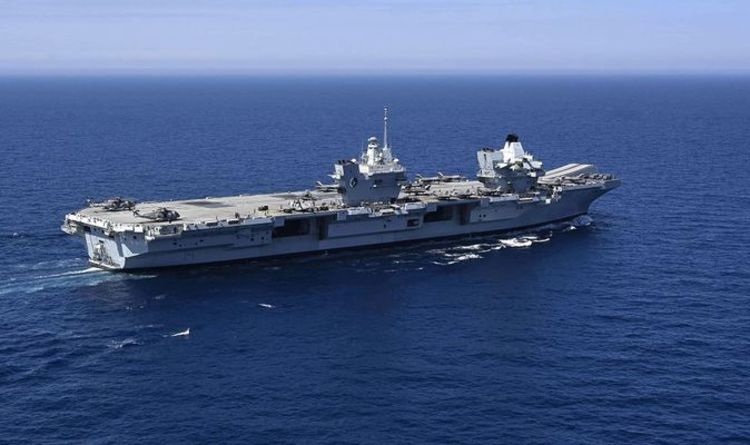 THE HMS Queen Elizabeth has made its first port call in Japan today, marking a historic turning point in the relations between the UK and the land of the rising sun. 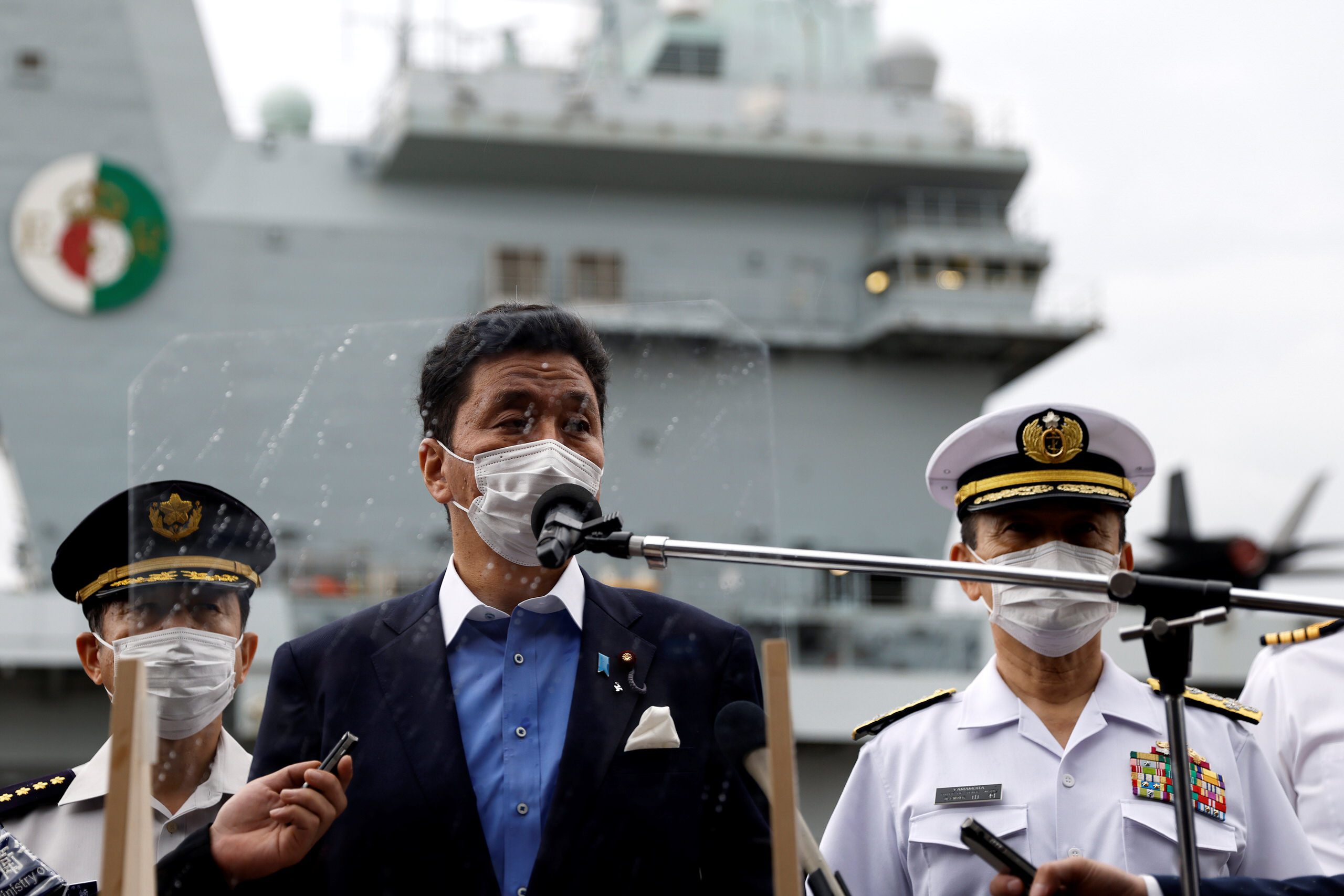 By Tim Kelly (Reuters) Britain showed off its HMS Queen Elizabeth aircraft carrier to Japan’s defence chief on Monday at a naval base near Tokyo, marking the start of a... 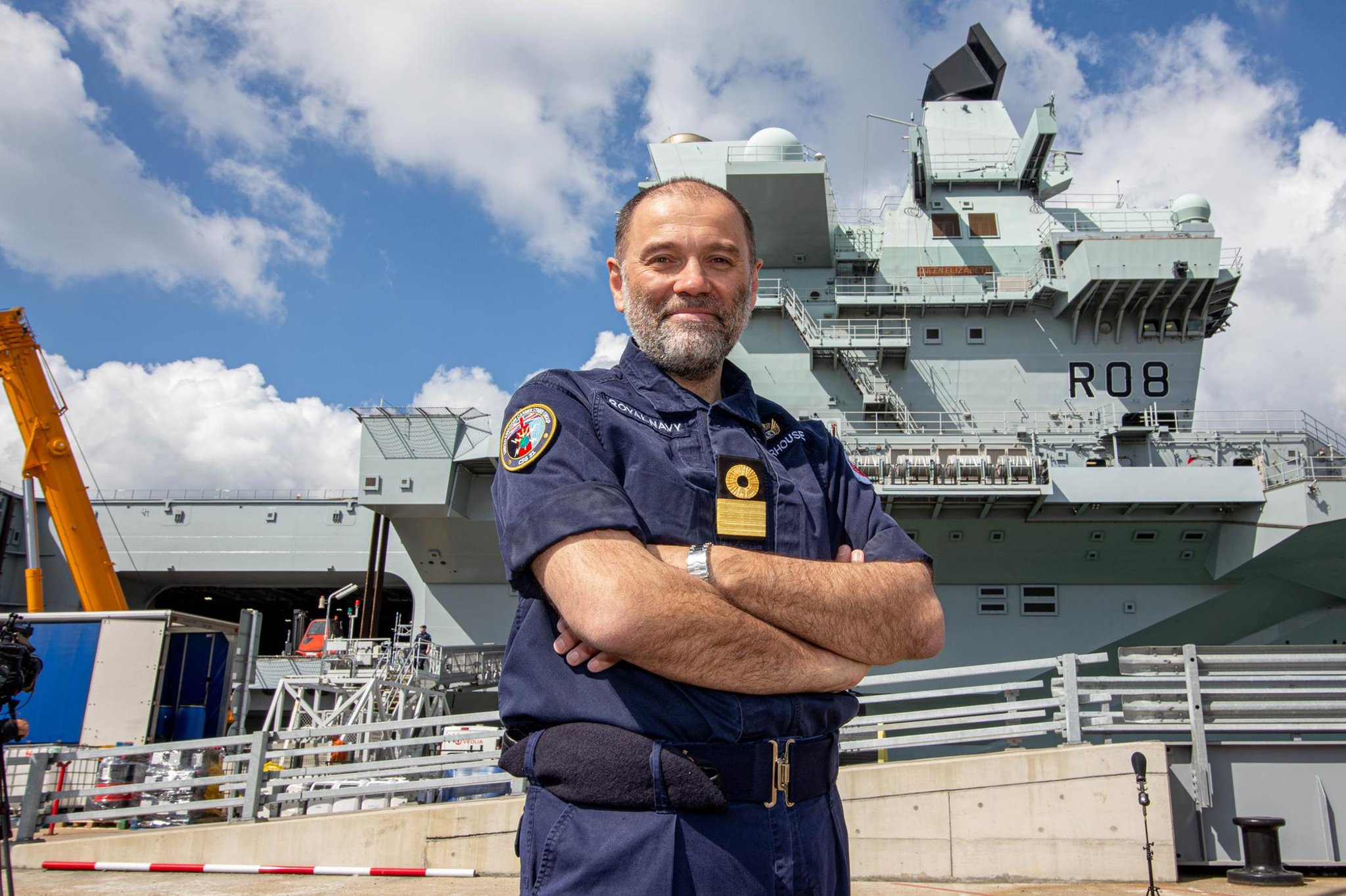 CANADIAN sailors helped solve a shortage of one of the most critical, moral-boosting items on board HMS Queen Elizabeth – the ship’s supply of tea.

Smart, very smart. I hope that this brief meeting will mean that there will be a future UK-India joint exercise in the not too distant future involving both the Indian Navy and Air Force.
T 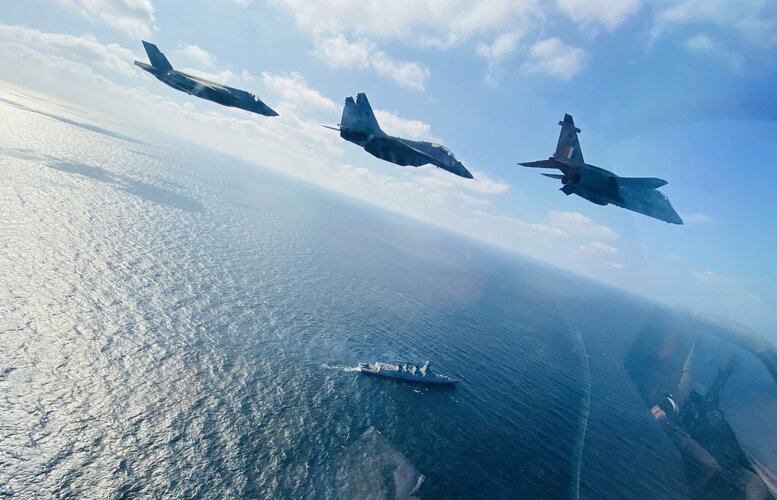 Noice! Particularly pleasing to see the Jag still growling!
A 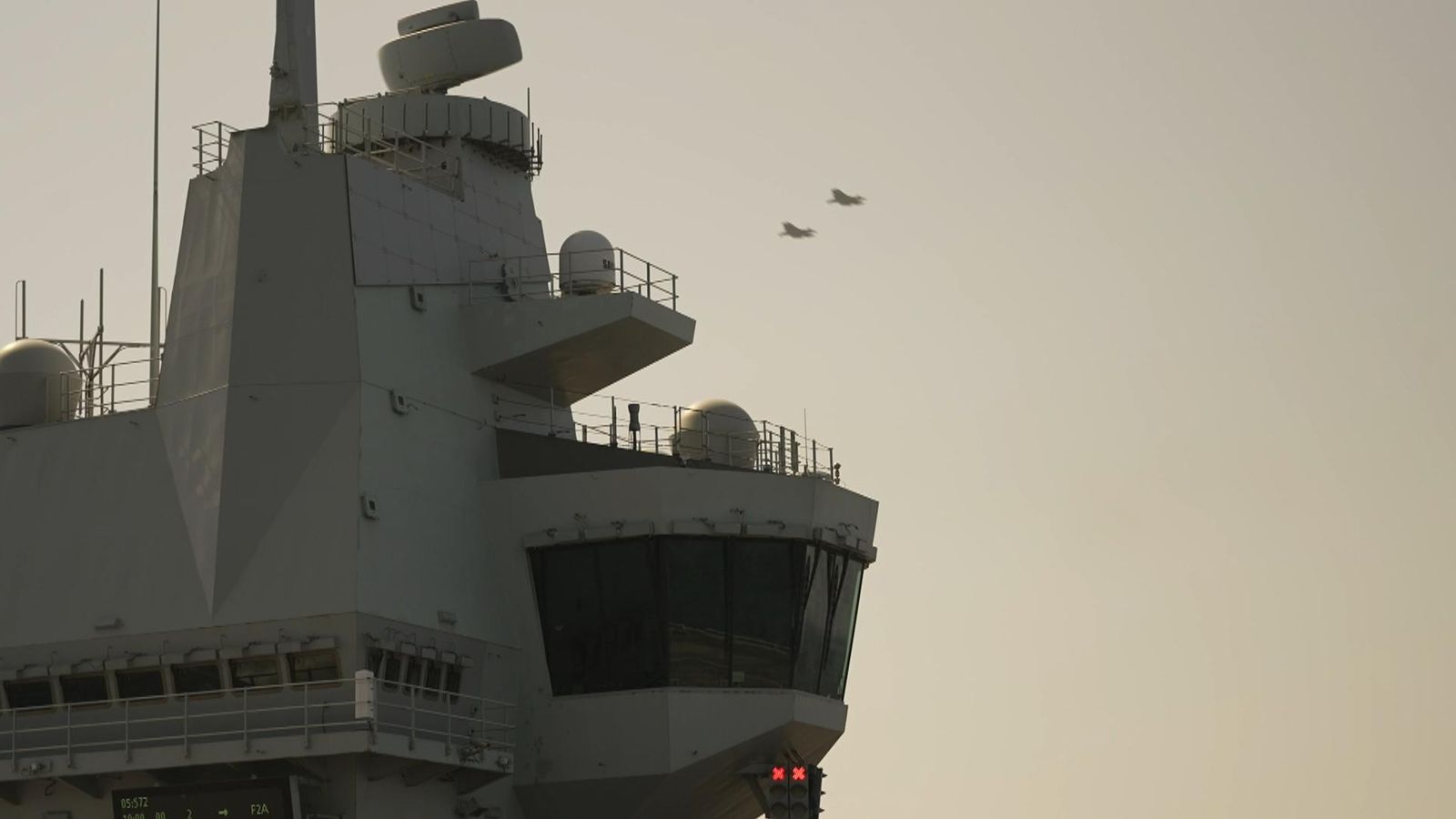