Hi guys
We are still working on our book on the Heinkel He 219. I wondered if anyone could point me in the direction of original reports, papers and recollections about the testing by the British / Americans (and possibly Russians) or captured German ejector seat technology at the end of WWII, specifically the He 219 seats? I am vaguely aware of testing at Wright Field in the US, and at RAE Farnborough (?) but I could be wrong.
Any assistance gratefully accepted!
Rich
E

Captain John Paul Stapp was the man given the job, along with "... a 1,200 page set of captured German technical documents, reports mostly, relating to aircraft ejection seat tests and biomedical examinations of human tolerance to the forces an explosive ejection creates." Stapp was fluent in German. This occurred shortly after his arrival to Wright Field on August 10, 1946. He reported to the Biophysics Branch, Special Projects Section and... "was informed he was now a project engineer assigned to the pilot escape technology program." Also, "The Germans had created elaborate test facilities at Tempelhof Airport in Berlin and had constructed a 60-foot ejection test tower."

great stuff! Thanks, will look into it further
R

My experience with ejection seats is primarily with seats and parachutes from Folland Gnats, which were some of the most complex Pilot Emergency Parachutes that I have ever packed. While I was working for Butler Parachute Systems, a flood of communist-surplus airplanes were imported to the USA along with unusual airplanes from England, South Africa, Yugoslavia, etc.
Last edited: Dec 10, 2020
R

I understood the Folland ejection seat in the Gnat was based on a SAAB seat. Presumably basic design was licensed ? In any event, Folland seem to have done a lot of further development work to make it acceptable to the Air Ministry.

Sir James Martin biography by Sarah Sharman has plenty on the Martin Baker efforts, and from memory would give plenty of sources to investigate further.

I don't remember a Saab link at all.

yellowaster said:
I understood the Folland ejection seat in the Gnat was based on a SAAB seat...
Click to expand...

It seems that the Folland Type 1-B seat was copy/derivative of the Saab Model IIB (as used on the J29 Tunnan fighter).

The seat was lightweight and small and it attracted the attention of the designers of the Folland Gnat. Manufacturing rights for the Model II were purchased by the Folland Company and modifications and tests were carried out to produce the first Folland Lightweight Ejection Seat. It would be to simple to say that the Folland Seat was a modified Saab seat. The whole Folland story requires an in depth article of its own. One is in preparation to go onto this website."

Apophenia, thanks for confirming. I suspect there were at least two models of Folland seat. The original lightweight seat seat licensed from SAAB - presumably used in the Midge ? - and the Mk 4GT, developed from the basic SAAB design for the Gnat T.1. A big part of the 4GT development was the man-stabilisation system - a drogue was used to stabilise the ejectee in free-fall until parachute-opening height. I guess that's what RiggerRob was referring to.
R

Yes dear yellowmaster,
I am tryin to remember specialized parachutes that I last worked on 27 years ago. My logbooks contain few details. Back during the early 1990s - immediately after the Berlin Wall fell, a bewildering array of communist-surplus warbirds were imported to the USA ... so many that the FAA imposed a short-term ban until they could catch up with applications. Most were registered in the Experimental/Exhibition/Restricted category.
Since the FAA banned civilians from owning "live" ejection seats, all the explosive cartridges were removed, except for a few automatic activation devices (e.g. Soviet K.A.P.3)
We also saw a wild variety of Cold War-surplus warbirds from friendlier nations like: New Zealand, South Africa, Sweden, Yugoslavia, etc.

As best as I cant guess, Folland licensed at least two different back-type emergency parachutes from SAAB. They were sewn by Irvin or G.Q. in the U.K. Harnesses, suspension lines and canopies were made of the usual nylon with a mixture of British and American hardware. But their containers were still made of cotton ... well into the 1950s!!!!
The first Swedish pattern was a conventional back-type container with a 3-pin ripcord containing a conventional round parachute. The ripcord could also be pulled by a barometric/timer automatic activation device that was initiated by a static-line. I repacked a couple of the first generation, but forget whether they arrived from South Africa (Aermachi Impala) or Yugoslavia (Sokol Galeb).
The second was far more complex. While it used the same canopy, AAD and 3-pin ripcord, it added a stabilizing drogue in the same volume. The main container was shortened slightly with the drogue compartment jammed on top. The drogue compartment was held closed by 1 o2 ripcord pins, but I forget how they were pulled. To increase volume for the drogue, the outboard edges intruded a bit into the top corners of the main container. The drogue and apron were attached with spiral "nautilus" drogue releases - that I have never seen before or since. These spiral drogue releases were attached to the upper corners of the container frame. The first stage of AAD operation was to pull nautilus release pins side-ways (inboard. Pulling DR pins released it to pull out the canopy at about the same time as the AAD also pulled ripcord pins.

As an aside, I also repacked a few parachutes for SAAB Draken jet fighters flown by the National Test Pilots' School (Mojave, California). They used the Martin-Baker Ejection Unit "horseshoe" pattern container that wrapped around the top of the mortar. They were held closed by a pair of ripcord pins. The pilot-chute was "soft" with the spring in a separate cotton bag but was not attached to the pilot-chute or bridle.
E

Folland Gnat F.Mk.1 XK767; Written off (destroyed) 15/10/58 - Loss of control six minutes after take off from Boscombe Down, when the aircraft entered a steep climb due to seizure of the ...
aviation-safety.net

Martin-Baker was unaware of German and Swedish work. (A source I dislike but good for a start.) 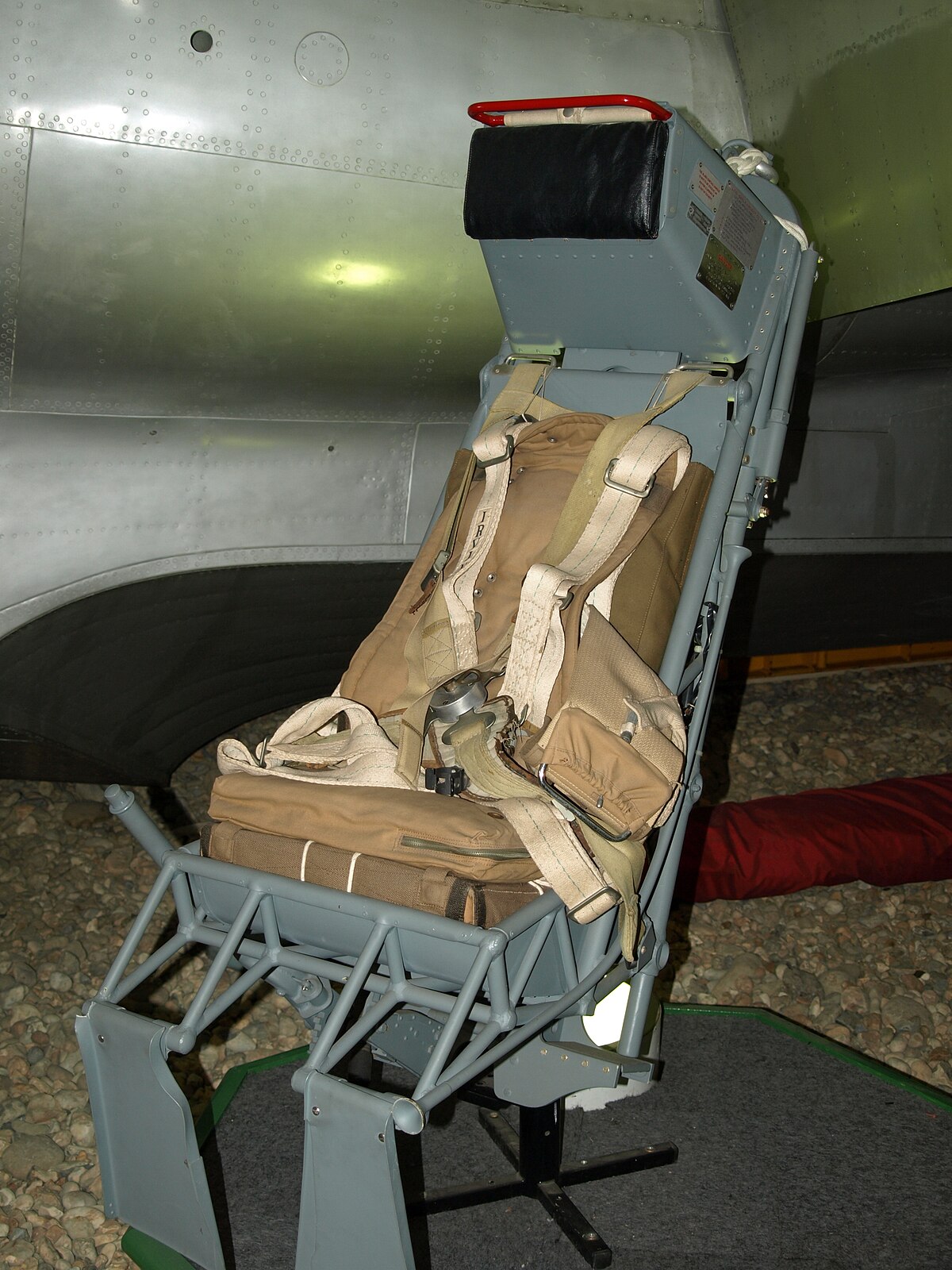 We’ve delivered over 70,000 ejection seats globally; when an ejection seat may represent a crew member’s last chance to survive, there can be no compromise.