I have in my collection details of these four Military transport aircraft projects and will welcome comments.
The Airspeed AS 60 Ayrshire development of the Ambasador
The Blackburn B107 Beverley Development (a new fuselage and four RR Tynes mated to the Beverley wing).
The Handley Page Herald variant that lost out to the Andover.
The GAL design for a Medium Glider that was to replace the Horsa.

Am I correct in thinking that the GAL glider evolved into the Blackburn Beverly? There's some nice info on the B.107 in Roy Boot's 'Spitfire to Eurofighter'.

The military Herald actually saw service with the Royal Malaysian Air Force. Sadly the Herald itself was not a big seller, dooming Handley Page...

That is quite right, but the variant used by the Malaysian AF did not have a rear-ramp.

Interesting drawings Aeronut.
Can you tell us what your source is?
A

Apart from the Glider all are from original Manufacturers brochures, the sort of thing the companies would have presented to their Airships who'd issued the specification.
The Airspeed one is the only one I parted cash for, the others were being thrown out at work (On that day my car was officially a skip ) along with nearly three hundred Airborne Forces experimental Establishment reports from WW2.
The New Medium Glider was contained in a Catelogue of Airborne Forces Equipments published by the AATDC

That's something, most of us are dreaming of !

Here's a Herald derivative, that should have been a development in cooperation
with Breguet, designated HPR-8 during a presentation of possible future car ferries
by Silver City in 1963:

Nice images and an area over looked in the Secret Project books so far.

Any more drawings of the Blackburn B.107 as that looks rather similar to an AN22 Cock although probably somewhat smaller.


was this patent for early Blackburn Beverley aircraft concept (the upper one) ?.

Drawing of the upper aircraft is the Fairchild C-82 I guess...

Both planes are illustrated in the patent drawing for comparision purpose I think..

Thank you my dear Lark.
P

The Herald looks like a potential Anglo Carabou of sorts
Another potential design opertunity lost to Britain?

Was Blackburn Beverly the only airplane with those net-style paratrooper restraints (seat-belts)?

While Beverly retained the belly hatch for dropping paratroopers, Bristol had the good sense to make it long enough to reduce the risk of banging your head on the rear edge (aka. “ringing the bell”).

The aft fuselage of the GAF New Medium Glider and Bristol Beverly looks like it was copied from the WW2-vintage Arado 232 “thousand footer.”
Last edited: Apr 7, 2020

riggerrob said:
Was Bristol Beverly the only airplane with those net-style paratrooper restraints (seat-belts)?
Click to expand...

I'm not sure, to be honest.

riggerrob said:
[...]
Was Bristol Beverly the only airplane with those net-style paratrooper restraints (seat-belts)?
While Beverly retained the belly hatch for dropping paratroopers, Bristol had the good sense
[...]
Click to expand...


Paratroopers being a rowdy bunch really do need to be restrained.

Master Corporal Rob Warner, CD, BA and a couple sets of paratrooper wings.
I survived when a Beechcraft King Air Force-landed when with a bunch of skydivers on board, but a shortage of seat-belts. Since then, I have become a seat-belt Nazi!
Last edited: Apr 7, 2020

Airspeed AS.60 Ayrshire C.1
Proposed variant to meet Air Ministry Specification C.13/45 for a medium-range military transport. Ten were ordered in October 1946 but were not built, after a review of the design's projected performance produced figures lower than the Air Ministry's requirements.

The AS.60 was then developed into the AS.67, which had a redesigned fuselage, accessed through clamshell doors and a large side door, but kept the Ambassador's wings, tail and empennage. This design was not produced as the Fairchild C-119 was chosen instead, which were to be supplied under MDAP, however, these were never delivered due to the outbreak of the Korean War. The first three images below were posted courtesy of Hesham and the latter one by Jemiba here: https://www.secretprojects.co.uk/threads/airspeed-aircraft-projects.3327/

AIRSPEED AMBASSADOR - A67 FREIGHTER PROPOSAL. This is an original Airspeed company brochure dated 1st Nov 1949 from the Airspeed Christchurch Factory in Hants. There are 21 pages, depicting the A-67 F 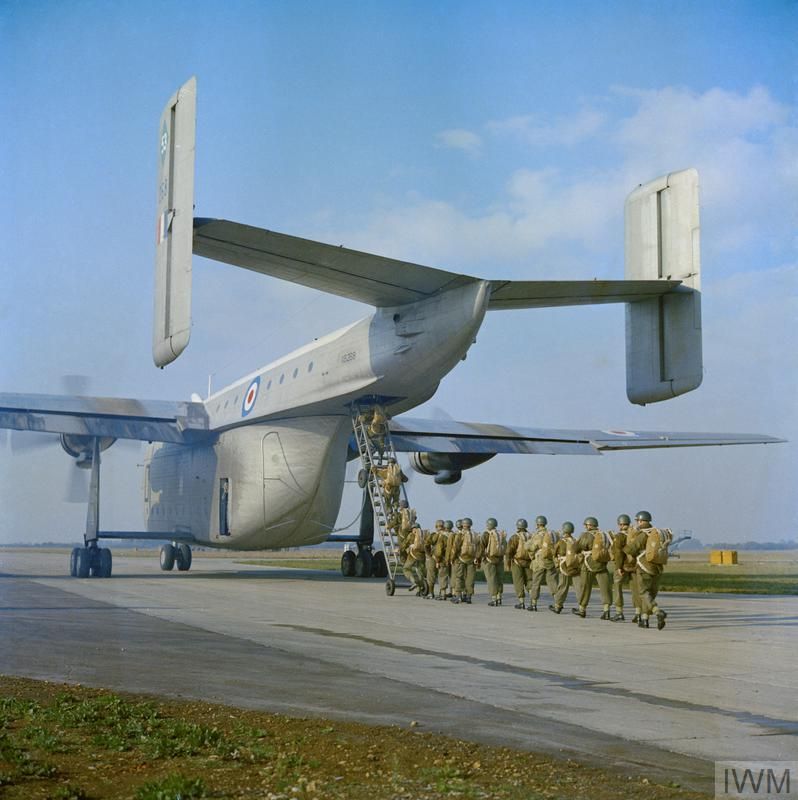 Can’t get any more British than this charming heavy cargo aircraft. Not a thing of classic beauty, these fixed undercarriage aircraft were nevertheless very dependable and also possessed very…

hesham said:
Hi,
was this patent for early Blackburn Beverley aircraft concept (the upper one) ?.
Click to expand...

One of several patents applied for by Brumby and Blackburn Aircraft in 1952, all relating to aspects of the Beverley. I agree with lark that the upper drawing is most probably the Fairchild C-82 but I would not expect them to have included it simply for comparison. To me it suggests that Blackburn and Fairchild may have signed a production licence agreement. The application for a US patent (from UK patent GB727159) may support this, but the possibility isn't mentioned in Chris' excellent On Atlas' Shoulders though.
N

Does anybody have more information (images will be great) on the proposed license-build C-130 Hercules powered by Tyne engines?
A

#8 & 9: C-82 similarity is, I suggest, conceptual. By the date of the Application, 5/53, C-119 was the product for which UK made an MSP bid. Any Sister Firm work and/or licence by Blackburn would have been on that. But I doubt any such thought entered the mind of Blackburn's Board. They had bought General despite, and not because of (to be) Beverley.

36 of the 42 Blackburn B.2 trainers had been operated to 1942 by the contractor for No.4 E(R)FTS/Brough...Blackburn A/C Ltd, who also owned (wef 1938) the contractor for No.5 E(R)FTS/Hanworth, the London Flying Syndicate, who in 1944 bought the freehold of Feltham Air Park/Hanworth Aerodrome, thus becoming landlord of General A/C. Hanworth was blighted for flying as Heathrow grew; General ran out of work when assault gliders succumbed to Pioneers and choppers. Blackburn did not buy them 1/1/49 for the son-of-Hamilcar scheme that became Beverley, but to close down the activity that was diminishing the value of the site....which Blackburn sold well to the Local Authority in 1956.

Blackburn has a treasured place in anybody's list of the World's Worst A/c and faced dereliction 3/51 when Y.B.1/B-88 lost to Fairey Gannet. (How odd that they diversified into aftermarket support of the Jowett Javelin car!) 30 BPA Balliols, then Vampire wings and 20 Beverlies kept them alive, increased to 47 after they schemed best for (to be) Buccaneer. RAF would have been entirely happy to support brown jobs with the same C-119G as many others, and were embarrassed to take delivery of blunderbuses after others had C-130A/B.
A

When HS681 was chopped 2/2/65 BAC/Filton rushed a slim volume to try to resurrect their BAC.222 that had lost to it. The DoD bid for (to be) C-130K was fixed price, late delivery penalty, 10 years' credit. British industry could spell none of those words, so no-one took the fiction as fact, least of all RR, horrified at the notion of building wet Speys to match McDonnell's F-4K/M production rate, so unenthusiastic to try to match Lockheed-Georgia's production rate at the same time...and trying to put Spey on (to be) F-111K.
Last edited: Apr 14, 2020
N

Thank you for your answer @alertken, I will try to get myself a copy of On Atlas Shoulders

Conceptual, yes, as are all illustrations in patents. Curious, nonetheless, that they should chose a design so easily recognisable as the C-82, the fins are so distinctive.

Despite the 3:1 ratio of capitalisation the joining of the two companies was a merger/amalgamation with many consequent changes at board level and a great deal of friction. Sure, the GAL60 may not have been looked upon with enthusiasm by the Brough boys but given the woeful state of their project work at the time the aircraft did hold out the prospect of sales. Neither Brough nor Dunbarton turned a profit after the merger and despite the sale of GAL's Hanworth properties the joint company was close to being on its knees within two years and narrowly avoided liquidation. The sale of 47 Beverleys was useful, to say the least.
Share:
Facebook Twitter Reddit Pinterest Tumblr WhatsApp Email Share Link