I believe that the PZL-107 and PZL-108 were both planned successors to the PZL-106 Kruk ag aircraft.

I think there is an image of PZL-107 on the following pdf (which I couldn't get to open)
http://www.smil.org.pl/ptl/wyklady/kruk.pdf

I have made it to open the pdf-file (there is a problem with it indeed; you have to download the file to your hard-disk and then open it with Adobe Reader).

Here are the pictures 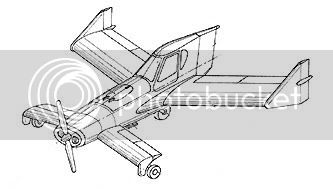 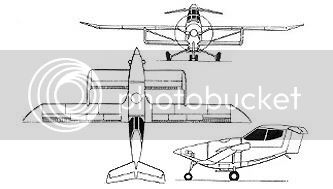 As for Fregata, you should note that the type's name 'Fregata' was used firstly in the middle of 1960s in designation of Tadeusz Sołtyk's design TS-15 Fregata, which had been a two-jet engine, swept wings, butterly tail-planes executive jet).

Thanks, Piotr. As a native-speaker, do you know more such interesting URL stuffed with PZL and other designs from Poland like at http://www.smil.org.pl/ptl/wyklady/kruk.pdf (thanks to Stephen for his discovery)?

Is there any text saying those 4 objects under the wings are rocket pods? I mean, you could always turn an agricultural plane into a COIN aircraft (see Vigilante version of the Ayres Turbo thrush for spraying Colombian poppy fields), but there is also the possibility that those are rotary atomizers for spraying chemicals, which would look similar in a front view.

wow, the Fregata looks similar to a cross of two lesser-known Rutan designs, the Grizzly and the Predator agplane.

AeroFranz said:
... Is there any text saying those 4 objects under the wings are rocket pods?...
Click to expand...

[Thanks for the readable version of this pdf Thomas! ]

There was definitely a Rutan influence. Design leader Andrzej Frydrychewicz, talking about the PZL-107, is quoted, saying "We worked in same time on other project including Kaczor II, modeled on the ideas of B. Rutan."

Boxkite asked about other urls on http://www.smil.org.pl/ Apologies for the hijack but others may also be interested.

Other subjects are listed but the live links are:

So, no unbuilt projects but a few PZL prototype rarities.

A rare PZL, the M-4, just two prototypes built and no three views available on internet until this post


M-10 was 18 passenger multi-purpose transport aircraft of metal structure,project of 1959.


M-11 was multi-purpose light aircraft powered by one piston engine,project of 1961.


M-13 was medium transport aircraft of metal structure,accommodated 24-32 passenger,powered
by two turboprop or turbojet engines,project of 1961-62.


Are there any drawings survivor to those projects ?.

the PZL Condor was a project for 6-10 seat business aircraft,featured by a twin boom,
canard and pusher engines configuration,powered by two 1220 hp P & W PT6A-67A
Turboprop engines driven in common gear to a contra rotating propellers.

Are there any drawings survivor to those projects ?.
Click to expand...

Many thanks to you my dear Petrus,

It includes the development history of the Kruk and derivatives like the PZL-107 and PZL-240 and many others.

hesham said:
here is unknown Project of 1967.
Click to expand...

Hi
Hesham from which source is it?
A

philipp7 said:
Hi
Hesham from which source is it?
Click to expand...

I don't have this book,but inside it,a Project called; Samoloty dwusilnikowe,what was it ?.

I don't have this book,but inside it,a Project called; Samoloty dwusilnikowe,what was it ?.
Click to expand...

the PZL M was a low-wing multi-purpose monoplane Project of 1980/81,powered by one
turboprop engine.

In 1973, Poland and Yugoslavia began working together on future aircraft for the needs of both countries and for sale to third markets. On April 11, 1975, the General Conditions of Scientific and Technical Cooperation between the Polish People's Republic and the Socialist Federal Republic of Yugoslavia (known under the abbreviation PJWG- Polish-Yugoslav Economic Cooperation) were signed. A joint construction team was established, working simultaneously in Belgrade and Warsaw. The team's employees came from the design offices of UTVA Pancevo, Belgrade University of Technology, WSK-Okęcie and the Institute of Aviation. On the Polish side, the team was led by Dr. Ryszard Orłowski from the Institute of Aviation, from Yugoslavia - prof. Stanojević from the Belgrade University of Technology. The result of this team's activity was the development of a light aircraft production program - with a take-off weight of up to 5700 kg.

The jointly designed Polish-Yugoslav aircraft received the designations M-10, M-11, M-12, M-13, M-20, M-21, M-22 and M-23 - but they have nothing to do with those used in these the same years and later with the designations of aircraft constructed at WSK PZL-Mielec. At the end of 1975, a decision was made in Poland to discontinue cooperation.

The M-22 Project presented a light transport plane (passenger and cargo) with STOL properties, also intended for use in crew training, for sanitary tasks and as service and disposition. Designed as a six-seater twin-engine strut dorsal fixed undercarriage with a front wheel.

That last (proposed) Wilga 80 reminds us of the Russian Finist that first flew in 1993.
Did Russians steal patterns from Poland?

Could have been a late Soviet era technology transfer or even originally a derived joint project before everything went to hell.

The M-23 project is a light transport aircraft (passenger and cargo)
with STOL properties. It is also intended for use in crew training,
sanitary tasks, training of parachute jumpers, as a flying fishing
workshop and firefighting plane. Designed as a 10-12 seat twin-
engine strut back wing fixed undercarriage with a front wheel.