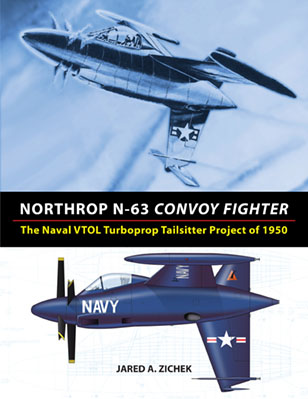 New book available! The Northrop N-63 was an unconventional VTOL turboprop tailsitter aircraft proposal submitted to the US Navy’s convoy fighter competition of 1950, which ultimately produced the Convair XFY-1 Pogo and Lockheed XFV-1 Salmon. It was a single-seat high performance fighter designed to protect convoy vessels from attack by enemy aircraft, and for vertical unassisted takeoff from, and landings on, small platform areas afloat or ashore. The N-63 featured a straight wing with pronounced dihedral and a very large ventral T-tail; armament consisted of four 20 mm cannon mounted in large pods on the wing tips. The aircraft was powered by an Allison XT-40-A-8 turboprop engine driving 15.5 ft six-blade dual-rotation propellers. The Northrop convoy fighter was designed to land vertically on a robust central landing strut in a collapsible tailcone as well as small shock absorbers located on the aft ends of the wing pods and vertical stabilizer; these landing support points were spread far apart to enhance stability on the deck. 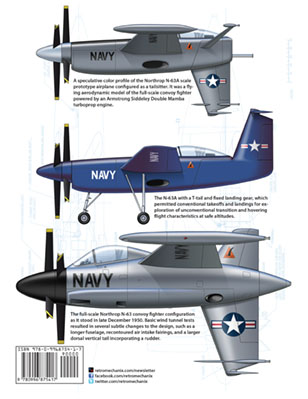 In addition to the N-63, Northrop also submitted the N-63A scale prototype airplane design, a small technology demonstrator powered by an Armstrong Siddeley Double Mamba turboprop. It featured a swappable tail section and auxiliary landing gear which permitted it to take off and land either conventionally or vertically, depending on the proficiency of the pilot. This 48 page publication features 66 illustrations, including detailed schematics, artist’s impressions, photos, and speculative color profiles of these remarkable secret aircraft projects, which are sure to appeal to historical aviation enthusiasts and scale modelers alike. It is printed in color throughout on heavy paper stock and has a full color glossy cover. This is my third book covering the convoy fighter competition, the first two being devoted to the Goodyear GA-28A/B and Martin Model 262, both of which are still available from bookstores worldwide. 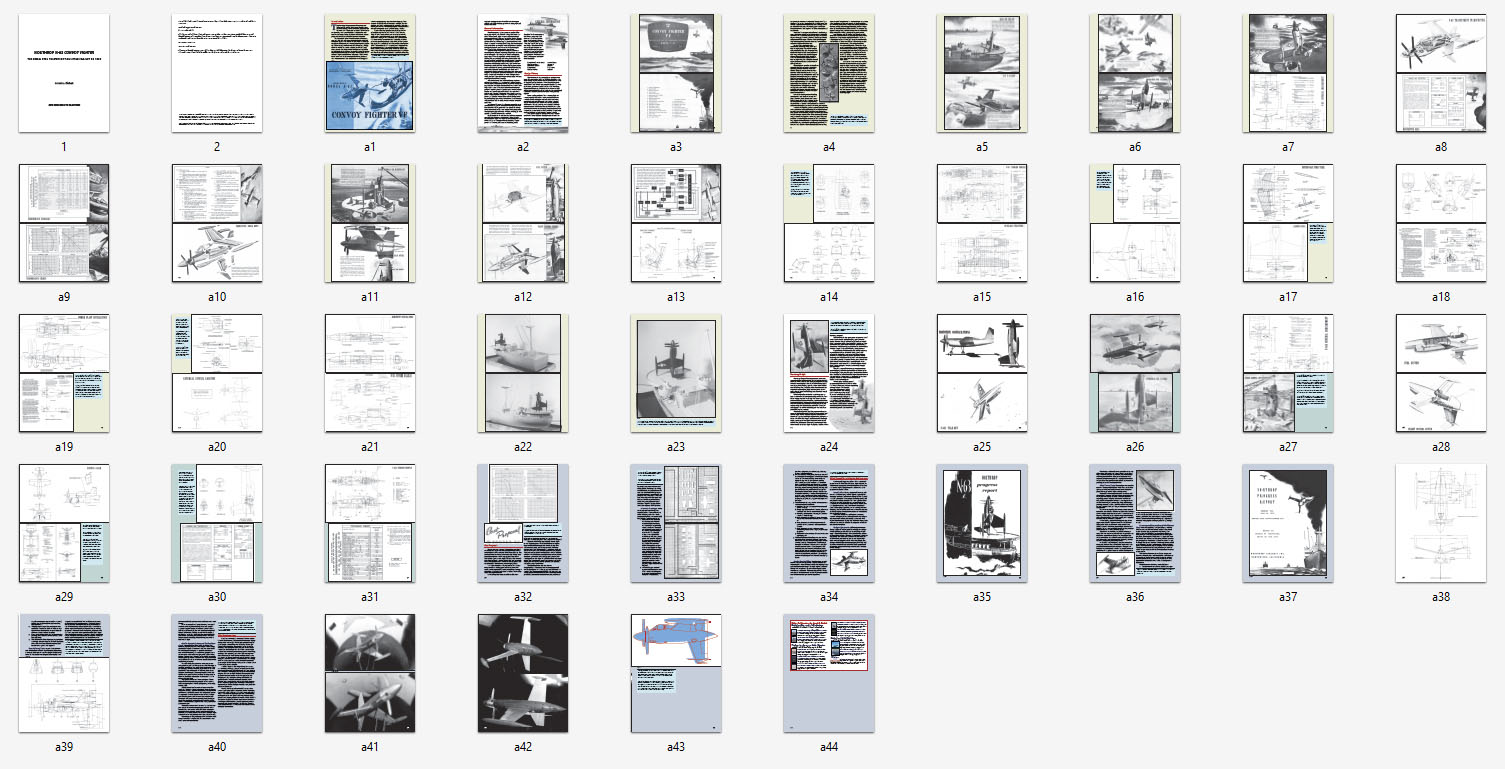 Listed at $15.99, the print edition of this book can be purchased on Amazon.com, its international branches, and various other booksellers worldwide. (Actual price may vary depending on the discount offered by these retailers). A Kindle edition is available on Amazon.com and its subsidiaries for just $6.49; the high resolution images are scaled to display well on tablets such as the iPad Air and Kindle Fire HDX. An EPUB edition is available from other major online bookstores worldwide for the same price. Finally, you can purchase both an EPUB/MOBI version for just $5.49 from my shop on Gumroad.com, a savings of $1 off the regular price!

I hope you enjoy the book—thanks for your interest and support!

Thank you Mr. Zichek. I have the other two convoy fighter monographs you've released, and look forward to adding this one to my collection. It will make a nice set with the Ginter series books on the Lockheed and Convair proposals.

On another note, I run a small bookstore, and don't deal with Amazon, so thank you for making these available via Ingram book distributors as well. I really appreciate it.

You're very welcome, Firebee - glad you enjoy them!

Can you tell me the designation of the first two types of your second illustration?

Those are N-63A scale prototype airplanes, which could be configured for either vertical or conventional takeoffs and landings.

I get my copy today. What a exciting and a deep book this is!!
Northrop N-63 Concoy Fighter was a really unknow project.
Thanks a lot Jared-san. You made my day again.

Sold! Another little treasure on my iPad to keep me entertained on my next business trip. When you are done with the whole series I would gladly buy a nice big coffee table book with all of them in one volume.

I posted this under a separate N-63 category. My second of the Zichek model series. This one has a retractable tail cone that is spring actuated and recesses when you place the model on it's tail and extends when the weight is removed. 8 ball point pen springs facilitate this neat feature. All of the mount points are machined brass. One of my favs. I'm sure the designers were on something...............

Never mentioned it, but we do commission work of any proposal models. This ONE MINE THOUGH..........