All of sudden need help with exact color pallete (CMYK) and standard sizes for PRU Pink Spitfire Mk.IXc roundels (as I understand, these are so-called 'Type B' with 2:5 radii proportions)
Italeri kit decals have them much bigger on wings that other sources.
Also of intersest is tail flash size standards and possible clues to tail number typeset...

Any help much appreciated.

Here is a chart from "Aircraft Camoflage and Markings 1907-1954 by Bruce Robertson, published 1956 so probably accurate. This might help Grigory. 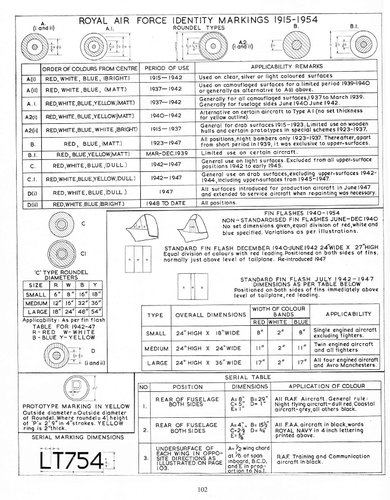 the markings were officially standardised but in reality varied in duameter and proportion on PR. types. best bet is following a photograph of the aircraft you want to depict.

PR. Pink as the initial mixed shade is noted as a very pale 'pink white', quite unlike what one would expect from modern representation. the standardised colour later avaliable being of a brighter hue. il try and find a note of it

For roundels the blue would either "ID blue" or "Roundel blue" (I'd go that one, as it's lighter) and "ID red".
J

The main color standard used on British military aircraft is known as British Standard BS 381, which was was introduced in 1930 as British Standard BS 381: Colours for Ready Mixed Paints. It was revised shortly thereafter in 1931 as British Standard BS 381C. This included a total of 57 colors known by their one or two-digit numbers and which were ordered in the following manner: blues, browns, greens, grays, reds, browns, and yellows. Neither white nor black were included. A further seven colors were later added bringing the total palette to 64 colors by the start of World War II. A few numbers were skipped, resulting in the numbering running from 1 to 73 with six of the seven newer colors not following the standard color order.

Numerous new colors were developed in the years before World War II while others were introduced after the war had started. From 1940, the Ministry of Aircraft Production (MAP) took charge of wartime color standards and this included all the major colors used on Royal Air Force (RAF) and Fleet Air Arm (FAA) aircraft. There were also two wartime updates of BS 381C (1943 and 1944) with a reduced palette of only 27 colors. However, only a handful of BS 381C colors were ever used for aircraft camouflage purposes. MAP colors did not have any numerical designation and were simply known by their names. Camouflage schemes were specified through numerous Air Ministry or Admiralty orders and were usually based around named two-tone disruptive schemes (such as the Temperate Sea Scheme) plus an underside color, and determined by aircraft role. US aircraft provided to the RAF/FAA via Lend-Lease were typically factory-painted in DuPont colors that closely approximated their MAP originals, and later in substitute paints from the ANA system.

Many of the wartime colors were subsequently incorporated into BS 381C in its first post-war updates in 1948 and 1964 (now known as BS 381C: Colours for Specific Purposes) though some were left out never to be used again, including some well-known ones like Ocean Grey. The 1948 update also adopted a three-digit numbering system where the first digit refereed to the color and last two two digits the shade. Color digits are: blue (1), green (2), yellow (3), brown (4), red (5), gray (6), and violet (7). Notably, no whites are included. Thankfully, almost all colors from the 1931 palette transfered their number to the last two digits so for example, No 1 Sky Blue became Sky Blue BS 101 and No 62 Middle Stone became Middle Stone BS 362. There were very few exceptions, such as No 43 Salmon Pink redesignated Salmon Pink BS 447 and some name changes like No 7 Dark Blue renamed Strong Blue BS 107. From the 1996 revision, all colors are specified as being semi-matt. A different standard, BS 4800: Paint Colours for Building Purposes has occasionally been used on aircraft as well with some colors like Barley Grey BS 18B21 eventually incorporated into BS 381C (as Camouflage Grey BS 626).

Guys thank you for the help!

And still question was not about PRU Pink...there are at least four ready PRU Pink solutions on modelling market already.
I was leaded to this edition to found out soon that it has significant mistakes...FR.Mk.IXc roundels are apparently NOT equal in size on fuselage and wing IRL on 16 Sq, Spitfires that clearly seen on a photo.
And there was never PRU Pink PR.Mk.X ...

i think in the case of PRU. unit aircraft expediency took precident. The roundels altho seemingly correctly proportioned so seem to vary in overall duameter from cobsidered norms. A case of finding a photograph of the aurcraft and depicting accordingly. Im surmising the reason being compromising visibility, the standard Spitfire upper wing roundel being quite large, 56", hence a reduced size, 40" or smaller (probably applied at unit level) would make sense ?

Hello, Flateric!
Did you read my PM for you?

Silencer1 said:
Hello, Flateric!
Did you read my PM for you?
Click to expand...

Yes, sorry for a delay with answer.
Bunch of thanks everyone for help!
Decals are ordered and printed for two 16 Sq. aircrafts, along with Hataka and Vallejo PRU Pink paints for following comparison.

Apparently Italeri kit and it's recon versions decals can be thrown to trash bin. Still not sure about serials typeset and X letter coloring.

And yes, note that probably all written dimensions in On Target: Profile 8 for PR Ml.IXc MK915 totally created out of thin air (I probably will need to redo fin flash too).

Hi flateric!
Are the roundel' colors on the photos (at post #6) "8033937830" and "Merlin" identical?
If so, they have been made with two different types of photographic emulsions and/or filters as well. I mean - Ortho- and Panchromatic.

Perhaps, some one could point me on comprehensive source of comparison of these two emulsion types, regarding to representation of aircraft' colors and markings in pre-1945 era?